Office Tower Grows Up and Up

Years ago, it was decided that the people of Bricksburgh couldn't all be expected to spend their days working as firefighters and police officers (which seem to the majority of Lego careers), so we built an office building for them to work in. 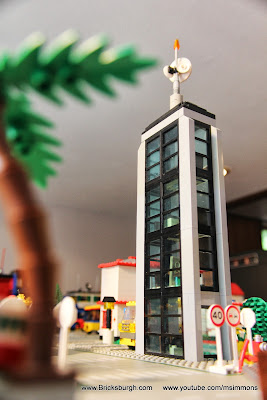 That original office building has since grown.  And grown.  And now it has grown again!
As originally built, the office building was just that: a building.  You can see it back in this older post called Where Dwight Works.  The building started with just two floors.  It was designed to have that "wall of windows" look that a modern office building has, but I was only able to get enough windows to complete two of the sides!  The "alley" side of the ground floor was just a solid wall. 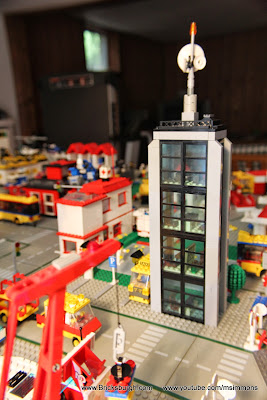 The recent US election of Donald Trump reminded me that he was (partly) the inspiration for the expansion of this structure from building to Tower.  You see, the show "The Apprentice" was in its first or second season at the time and was still good entertainment back then.  So naturally, our office building needed to have a Boardroom where young Lego minifigs could be fired!

I was able to scrounge together enough windows to expand the building up to more majestic 3 floor "skyscraper" height.  It still wasn't the highest building in town-- that was the Condo Building at that time -- but it's proportions were better. 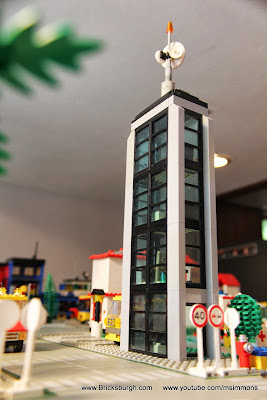 When we moved to our new house in 2012, we expanded the Office Tower again.  The Boardroom remained on the top floor, but a new floor was added below it.  That gave the tower new height and with addition of the spire on the room, it reached nearly even with the five-story Condo Building. 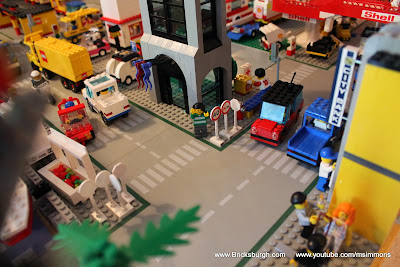 After a trip to Chicago, we came back and decided that the ground floor entrance and lobby area of the Office Tower needed to be more expansive and majestic.  So we gathered up everything we had that was grey and started brainstorming.  The result is a large arched lower level that flairs out to give some heft to the ground floor of the building.  We also added yet ANOTHER level to the tower and built an even larger spire on it.  Don't see it in the pictures?  That's because it's only in the video...
The new Office Tower is the unrivaled king of the Bricksburgh skyline and now has the floor space to get some legitimate "officing" done!  We've cleaned things up and there is a tour of the newly improved building in the video clips at the top and bottom of this post. 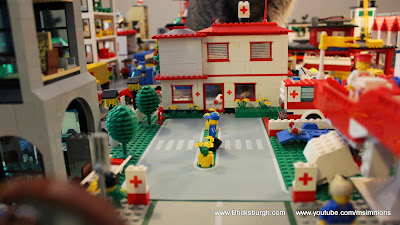 The Office Tower's new height led to some other changes in that part of the city-- namely the new courtyard entrance for the Hospital.  That whole complex has been seriously upgraded and we'll show it to you soon, along with some other big changes we've been making to the Condo Building and Boardwalk area.

Thanks for visiting us here at www.bricksburgh.com and check out the videos on our YouTube channel at www.YouTube.com/MSIMMONS.
at 11:00 AM