You've probably seen it in the videos and pictures.  You may even have caught the name of it.  Some have requested a more detailed video tour and instructions...   but in reality, this building was never intended to be anything more than an answer to every "where do you buy" question. 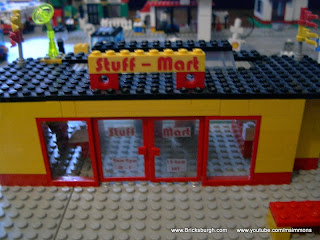 Stuff Mart is not a name that we made up.  The Stuff Mart name came from a VeggieTales song from one of their videos.  For our purposes, the Stuff Mart was the answer to every purchasing question. 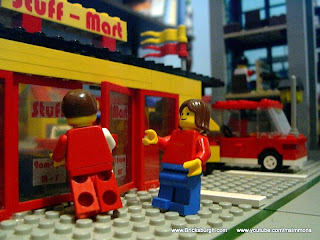 Everything the Legotown resident could ever want would be available from the Stuff Mart.  It is like a modern version of the old Sears or General Stores from a frontier town.  If they didn't have it, they would order it to be shipped in.   The Stuff Mart, therefore, is a necessary building to have just so that all those questions can be answered in a way that makes sense.  Recently we added the TechMan company (building, van, person) to town and have since decided that he handles all the electronics and computers in town-- kind of like a Best Buy store--- but everything else in town still comes from the Stuff Mart.
Pretty soon we're going to demolish this version of the store and build an even larger one, probably with a garage underneath.  Until then, remember that whatever you need... Stuff Mart has.