In between projects at the new house, projects at the old house, and moving stuff from one to the other, we've been working on some Lego projects too.   The town may be boxed up and the table dismantled but there are plenty of unused Lego pieces lurking about and now and then we find enough to cobble together some interesting creations-- some of which are good enough that they will survive to make an appearance in a future Legotown Tour.  These "Super Vans" (from our YouTube video) are two of those recent creations.  Read on for their story. 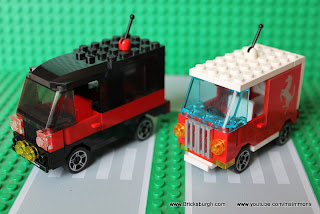 Like most vehicles, these started with chassis pieces.  Sure, sometimes I've featured vehicles that were built using NO CHASSIS pieces (or much of anything else car-specific) but usually these creations begin by the discovery of a fender, door, or chassis part catching my eye out of a big pile. 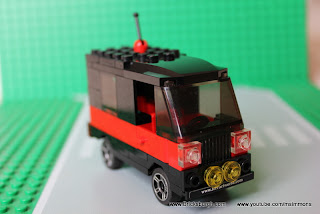 I call this one the "A Team" van in honor of that wonderfully kitchy TV show from my childhood.  It reality it doesn't really bear much resemblance to Mr. T's ride other than the basic colors involved.  There is no roof spoiler, no roof mounted lights and the red stripe doesn't kick up at the back. 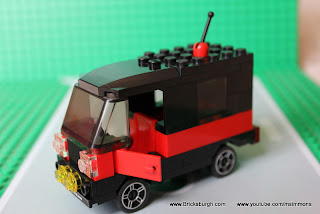 Still, the lower front fog lights,  sport wheels and tinted windows give the van a touch of menace.  The jutting front bumper helps out too.  If I could come up with the right pieces, I think a  minifig Mr. T would cruise Bricksburgh quite happily...  looking for fools to pity. 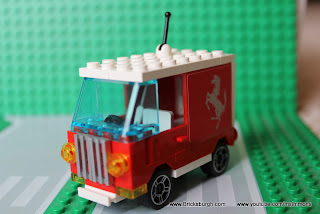 The other van featured today was inspired by the side panels.  We had a Lego Racer set that was centered on a race car transporter that was smaller than minifig scale.  The set ended up getting dismantled into a bin and the parts were poached for other projects-- except for the side panels with these gorgeous silver Ferrari prancing horse logos.  Not a lot else you can make OTHER than a van when you're starting with 1x4 panels! 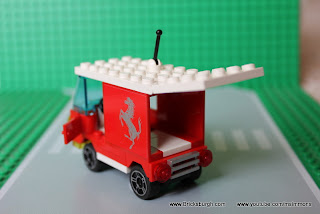 The question became rather not WHAT to make, but HOW to make a van that was cool enough to wear the Prancing Horse?  Well, obviously it needed sporty wheels (which we have plenty of) and it certainly was going to be RED.  I'd already used a lot of black pieces on the A-Team van so I needed another color to highlight the van with so it wasn't a huge red brick on wheels.  Listening to a podcast on cars, I heard that white was one of the best selling colors for Ferrari.  Well, then!  White it is.   I pulled together some white interior pieces a couple white trim pieces on the bottom and roof. 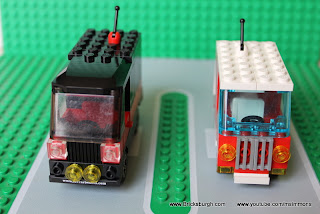 I debated on what color to use for the front and back grill pieces and ultimately decided to try and pick up the silver from the logo stickers.  White was just too much, red was too little, and making them black was adding too many colors to the van.  I turned the grills vertical on the front to make it look different from the other vans in town already. 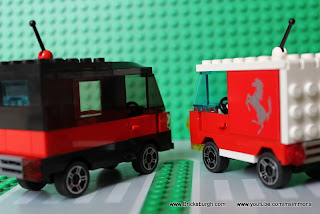 If you want more information on these vans or want to build your own, check out our Super Vans Tutorial on YouTube.