The city continues to get further refined and built back up.  We've recently done some work in the boardwalk area-- which you may have seen in our video updates-- including a rather significant change to the way tourists get snacks. 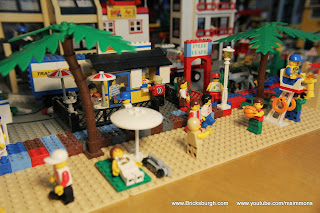 Read on to see what we've changed and to get a closer look at some of our other beachfront improvements.
If you've seen the old videos of town-- or even the "historical" pictures we've shared on this blog-- you may recall that the Snack Bar has always had some of the town's most valuable real estate, right near the boardwalk.  First of all, in case you're unfamiliar with the building we call the Snack Bar, it was originally sold as set# 6683 Hamburger Stand.  We've since doubled the table space and added numerous details, including black fencing to separate the eating area. 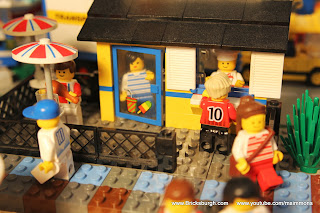 Whereas in the old town layouts we've used the black fencing to provide some protection for the stand's patrons from the surrounding traffic, this time we're using it to mark off some "private" eating areas distinct from the public boardwalk.  The entire Snack Bar has been elevated from the street and is only directly accessible from the boardwalk.  This configuration is more in keeping with eateries we've seen at real boardwalk/beach resort areas.  The boardwalk colors gradually change their pattern to integrate and echo the Snack Bar's dark gray platform area. 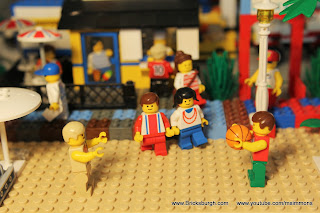 Since the beach crowd gets the "full attention" of the Snack Bar's facade, it gives the whole beachfront area a much more "touristy" feel.  We also placed a decorate street light between one of the boardwalk entrances and the Snack Bar to add a little charm to this section of the boardwalk.  I don't think Lego ever made a volleyball... in case you were wondering about the feasibility of playing basketball on a sandy beach. 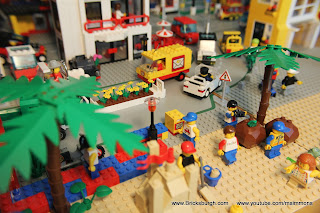 At the time these pictures were taken the other end of the boardwalk was still pretty undeveloped.  Plans for the future include a surfboard rental kiosk and maybe another lifeguard stand... since right now we just have a lifeguard, standing. 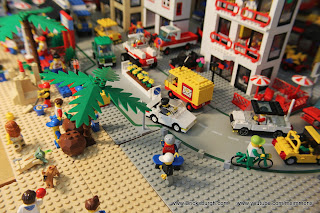 One of the big changes to the beachfront street is the split entrance.  We happened to have an extra road plate with a split in it and couldn't decide where to use it.  One of the early thoughts was to use it at the airport but we changed that one to a green plate with crosswalks.  This plate didn't have a crosswalk but since we were lining up the middle street plate's crosswalk with the beach entrance anyway, another crosswalk would have been silly.  In a real resort town, pedestrians are often struck by vehicles so "traffic calming" measures are quite common.  With that as an inspiration, it seemed natural to restrict the number of crosswalks and use the divided plate as a "festive" way to slow down the crowded beachfront street. 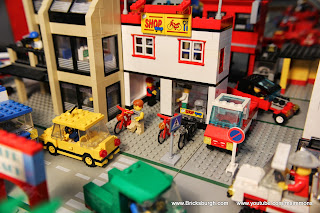 Across the street from beach entrance is our expanded Bike Shop.  Tyler added a second floor to it shortly after he got it.  The first floor is used for sales, rentals, and repairs while the second has a small apartment for the shop owner.   If the building looks vaguely familiar, it's because it originally started out at part of set# 7641 City Corner. 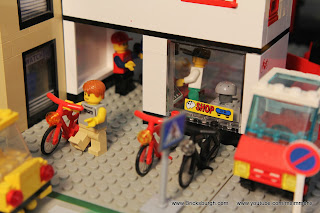 Another happy customer takes his rental bike out of the shop.  I haven't seen anyone riding on the boardwalk itself yet, but I'm sure they will at some point as Tyler has fond memories of doing that in real life.  The Bike Shop also has a shop truck that they use to shuttle bikes and other equipment around town.   Worth noting-- we call it a bike shop but, as the sign indicates, they also do sales, rental, and service for Bricksburgh's growing skateboard community.   In fact, I would not be surprised to see skaters enjoying some ramps or even a skate park in town in the future.