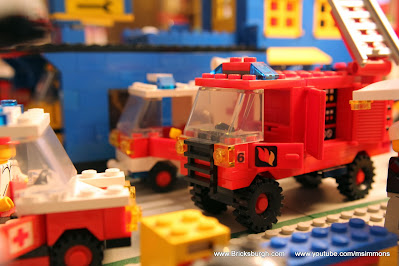 Inspired by the Pizza Shop fire post, I took our fire vehicles all outside for a walkthrough of what we have and their modifications.
Here's a breakdown of the original sets that make up the basic fleet, though most are significantly modified:
Truck 1 and 6 are from the Fire Station set 6382.
Truck 2, 5 and the motorcycle are from Fire Rescue Squad set 6366.
Truck 3 is set 6650.
Truck 7 is the Snorkel/Pumper set 6690.
Truck 4 is a total MOC/custom.
The helicopter is set 6685.
The large ship is set 4025.
The smaller boat is mostly made of (according to the sticker on it) set 6478. This was a piece we acquired from a grab bin at a garage sale or something. Since we already had a better helicopter (and 6478 is from the era of bad design) we have used that piece for making this smaller fire boat. It was previously an airport fire truck (see Tyler's video below).
The airport fire/foam engine is set 6614. Lego intends that as a safety truck for the Space Shuttle launch area, but we liked that it had unique markings from the town fire trucks and have just opted to make it the designated fire engine for the entire airport. This was also partly because (at the time) efforts to get set 6440, which actually has airport/airline logos on it were unsuccessful. Also, 6440 is 6-wide and VERY large, compared to 6614 which is 4 wide but still looks like a big airport fire truck.
Somewhat amusingly, while looking for a lead image to use on the NEW video (so I wouldn't have to see my face!) I ran across this old post about washing the fire trucks. At the bottom of that post was a video of Tyler doing THE SAME VIDEO I JUST DID.  Oops...  Well, there have been some changes over the years. See if you can spot them:
Here's the new video -- YouTube version, in case you weren't able to see it above:
Thanks for visiting us here at www.bricksburgh.com and check out the videos on our YouTube channel at www.YouTube.com/MSIMMONS. You can also follow us on Twitter: https://twitter.com/Bricksburgh and Instagram: https://www.instagram.com/brixburgh/
at 10:53 AM