"Breaking news on Bricksburgh-TV, we have reports of a fire at the City Hotel..."
That's how you might expect the report to start as the helicopter camera catches a ground crew already interviewing first responders. 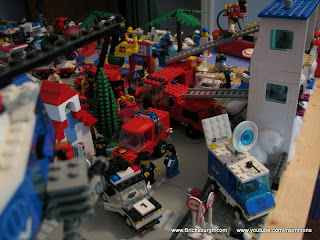 Remember how last time I wrote that we'd burn the hotel down?  Well, here comes a mega-gallery of hotel destruction, fire trucks and dramatic rescues! 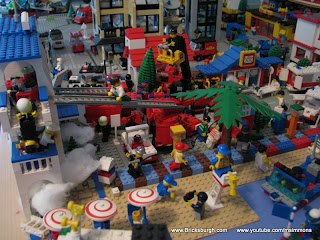 From the other side of the scene you can see ladders are already extended to rescue people from the upper floors.  The fire rages through the ground floor, where it started in the kitchen of the beachfront cafe. 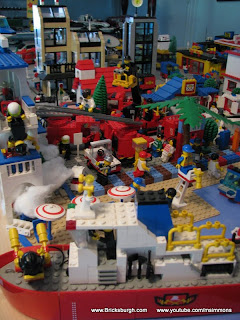 The fire boat has moved in as close as it dares (without grounding) to try and throw some water on the blaze, 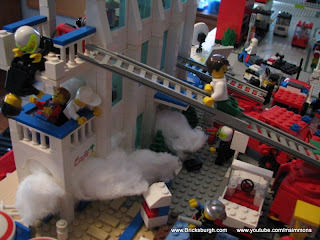 As the fire spreads to the second floor, firefighters must work together to attempt a daring rescue.  With a civilian already on the ladder they can't lower it to the second floor and the trapped hotel guests can't get to the other ladder because there is fire in between. 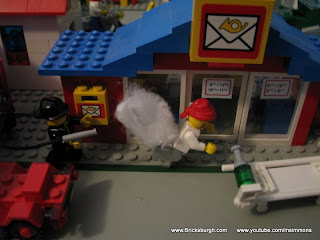 The chef  is found running away from the fire and quickly chased down by a firefighter-- Stop, Drop & Roll!! 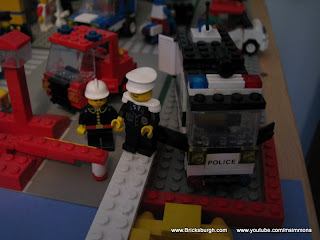 The battalion chief works with the police chief to organize the emergency response teams. 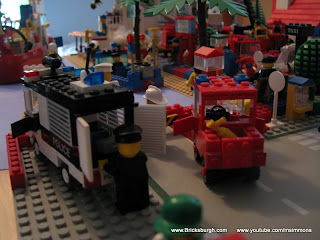 Their mobile command post is set up across the beach from the hotel so they can better supervise the entire scene. 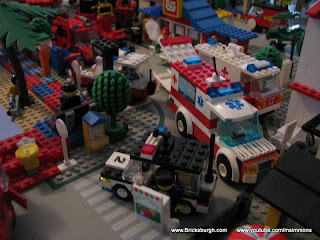 Police units have blocked off the surrounding streets as paramedics prepare to receive burn victims. 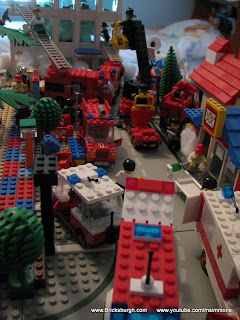 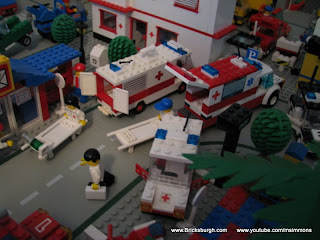 The paramedics will use the closed street as a triage area before moving the more seriously injured victims (if any) into the emergency room of the hospital. 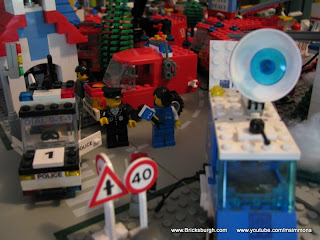 Bricksburgh TV is already talking to the first police officer on the scene. He was on routine patrol, saw the smoke, and immediately closed the street in front of the hotel.  His quick action allowed the fire crews to have more room for their equipment when they arrived moments later. 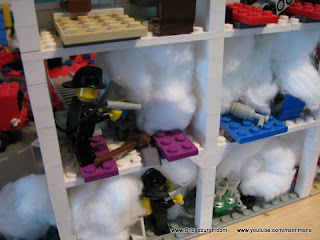 Inside the hotel, the fire has spread from the kitchen throughout the entire first floor.  The lobby and cafe are completely involved and the fire has burned up through the middle of the hotel into the second floor.   You can see an abandoned fire extinguisher on the blue bed-- it wasn't enough to stop the flames. 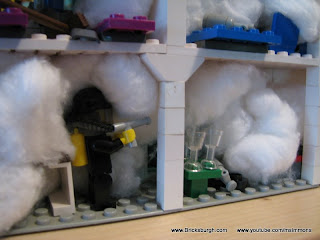 Getting into the middle of the fire requires a full helmet and respirator unit.  The fire department only has a few of these specialized helmets-- except for the airport fire unit, who all have them. 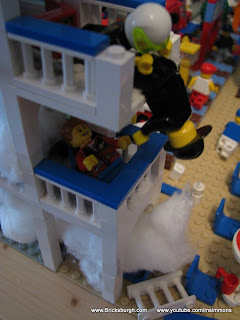 Two firefighters on the 3rd floor have used their axes to knock out the railing on the balcony so they could try and snatch guests trapped on the 2nd floor.   The one firefighter is still wearing his motorcycle helmet (he usually patrols around performing building inspections and other light-duty tasks). 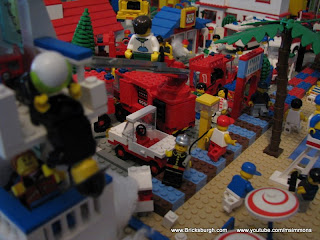 After the firefighters reached the third floor, they sent the guests trapped there down on their ladder.  You can see more fire hoses being brought to the inferno as civilians run out of the area. 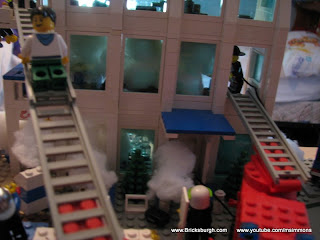 Another fire unit breaks through a window on the second floor as they try to kill the flames trapping the other guests on their balcony. 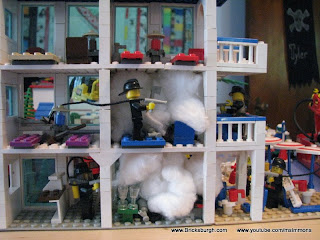 As the firefighters work, they begin to get some control over the flames.  The left side of the hotel has been cleared, the guests all rescued, and the flames are successfully being attacked from both sides on both levels.  The fire crews have been able to keep the third floor from burning 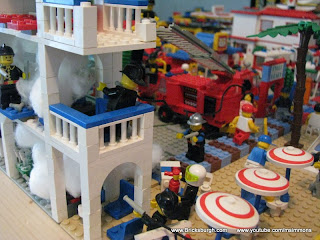 The fire is still burning, but under control.  Everyone has been rescued but damage to the hotel is extensive.  In the coming days the guests will be housed in a shelter set up behind the fire station.  It won't be as luxurious as the hotel was, but they'll have great vacation stories!
Here's a video showing most of the fire equipment featured in these pictures.