A while back we posted a YouTube video on how to make a Porsche but lots of folks were more interested in this: 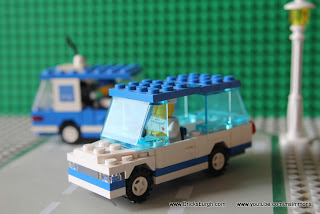 That's right-- a family-mobile in the background attracted more attention than a sports car!
With such a strong response, we decided to make a video tutorial on the cars which you can watch here:

As explained in the video, the car is really just a slightly stretched version of the standard car. 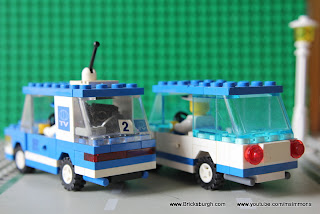 The biggest downside to this modification is that you STILL can't fit more than one minifig in the car.  The upside, however, is that it makes for a great business-related car design.  We adapted the regular wagon to make a version for Bricksburgh TV.  As a side note, see that full width taillight?  The only other car in Bricksburgh with a full width taillight is the Mayor's Limousine. 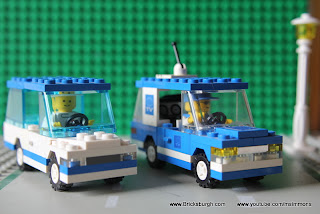 The front ends of these two cars are quite different.  If the nose of the TV car looks familiar... well....  as ridiculous as it may seem, it was inspired by the nose on the Griswald Family Truckster from the movie  National Lampoon Vacation.   Notice I wrote "inspired by" not "is a replica".   Maybe if I added some wood panels to it? 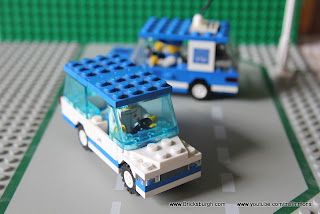 We originally made this car with clear windows but it looks better with the light blue ones. 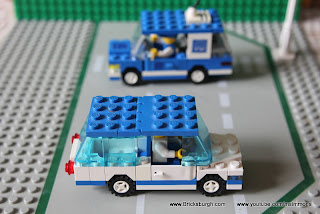 Here you can really see the extended length of the car.  Note that you could also build the car with a different roof configuration.  If you used a roof piece that hinges off the rear window support piece (like those used on the pickup trucks) it would just sit on the 1x1 bricks behind the doors.  No other changes would be necessary. 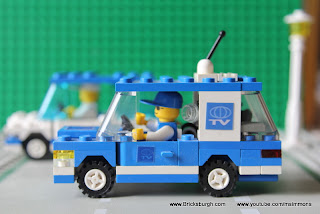 The TV car had clear side windows when it was first built.  It wasn't until later that it received stickers and white panels instead.  It wasn't build as a news car. 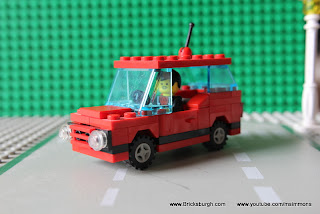 While we're on the subject of car variations, here's another slightly unusual ride that roams around town.  We call this the Frenchie Frenchman's car because the driver has a rather flamboyant shirt on.  The car also seems to have some of that awkwardness common to French car makes. 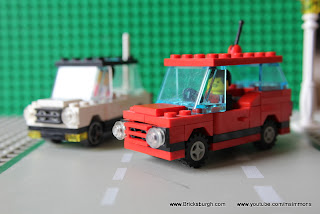 The nose is slightly droopy compared to a regular Lego car (like the white one beside it) and the roof line is almost as long as the wagons.  The headlight/grill area is also done in the contrasting color just to make it look a little more old fashioned. 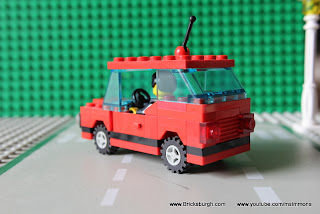 The back of the car is dictated by the rear window shape.  The first car we used the shorter back window on was a blue one (which you can find somewhere in most of the town tour videos) which has since been changed again to a fastback look.  All that added mass on the back of the car meant that it needed to have some kind of transition from the door area.  Luckily, getting 1x1 slope pieces is pretty easy these days and they fit there perfectly.  The slopes give the cars a "hip" that combines with the chunky back end to make them look a little Swedish... like a Saab?
If you'd like to make your own version of these cars, check out our tutorial here:


Thanks for visiting us here at www.bricksburgh.com and check out the videos on our YouTube channel at www.YouTube.com/MSIMMONS.
at 1:00 AM