Seems like we've been in a holding pattern for a few months here, but the clock is finally winding down our on "two house lifestyle".   Tyler and I have been working on the design for the new Lego tables and spending some money on eBay while the moving related house projects wrap up.
Since there might be some new eyeballs on the blog in the next few days, here's a little pandering to our guests: 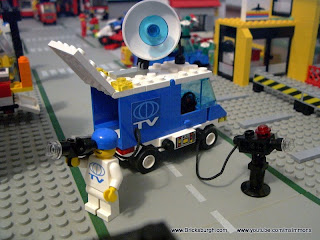 Wondering what that is all about?
The guests I'm referring to are a special crowd.  Thanks for stopping by!  The news truck is slightly modified from a really nice Lego set from 1997 called the Crisis News Team.  That set, BTW, is a great gift-sized set and can be found on eBay most of the time for less than $25 (we usually have an extra one around for that purpose).

We branched that set out into a full Lego TV business which included a new building, which you can see HERE:
Okay, so that's the update for the "September Newsletter" crowd, if they stop by.

For the rest of you Bricksburghers, it's been two weeks since our last video post-- sorry!  We've been so busy even Tyler hasn't been taking pictures.  A new video is in the works as soon as we can sit down and shoot it.  It'll be a departure from the Lego tutorials and will be more of a "FAQ" (frequently asked questions) because frankly, we get a lot of repetitive questions, and one of them is why don't we ever both appear on camera?  We'll answer that....  and others, on camera, very soon.

Also coming soon: more details on our eBay spending spree.   I don't want to give away too much (a few surprises still await Tyler and Mia) but suffice it to say that some of our new additions are related to some real-life aeronautical hardware that recently flew to LA for the last time.   For those of you in the know, you also know that Lego made some superb sets inspired by those efforts...  and we now have several of them, with more to come.   Hopefully that's enough to keep the kids guessing too!

Thanks for visiting us here at www.bricksburgh.com and check out the videos on our YouTube channel at www.YouTube.com/MSIMMONS.
at 1:39 AM