Not in My Backyard

We're in the process of planning the new Bricksburgh Legotown tables.  As we've previously written, the town will be located on two tables of 2 or 3 levels each.  In the last post we described and linked the new sets that will be joining the airport complex in the new town.  One of the biggest considerations when planning the town-- just as in real life-- is determining where the airport will go.  No one wants to have jets taking off and landing in their backyard and yet, that is exactly how "old Bricksburgh" was laid out.  Pictured below, you can see that while the downtown and beach areas were on the top level, the bottom level was for what was leftover, the neighborhood and the airport. 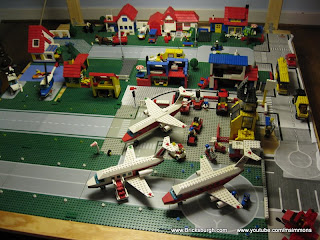 In designing the new town (and the new tables) we are going to have a much larger airport/shuttle launching complex.  To better explain our design ideas, We've pulled out some pictures from the previous versions of the town as we explore the possibilities...

If you haven't already, refresh your memory of how the town looked just prior to be boxed up by watching the 2011 Tour.   To avoid repeating the mistake of that town (having the neighborhood backed up against the runways) we're planning to put the airport on a dedicated level on one of the new tables.  The layout will be much more in keeping with how the airport was constructed in the days before the tables, which are pictured below and can also be seen in the 2007 Tour. 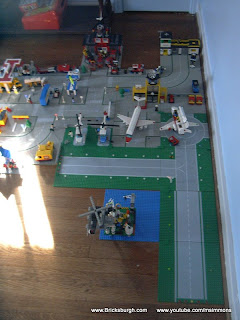 This was the original layout of the airport -- a sprawling "L" shaped runway design.  It was clever in that the door to the room actually went OVER the far end of the runway but it also meant that jets taking off and landing on the other runway were a big threat to the post office and its trucks, as seen in our post on the Historical Airport.   Incidentally, the structure on the blue plate was an oil rig complete with a helipad.  In this picture it appears the police have landed there for some reason. 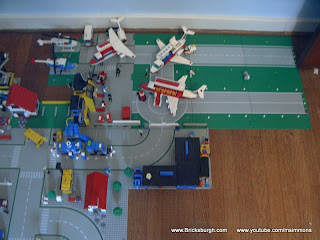 The solution, of course, was to change the orientation of the runways.  We opted to run both of the runways toward the room doorway (which can be seen in the picture on the right) so that the post office employees wouldn't get so stressed out.  In fact, we also changed the location of just about everything else-- with the police station rotated and the car repair shop moving closer to the airport to make a more "industrial" feel to that end of town. 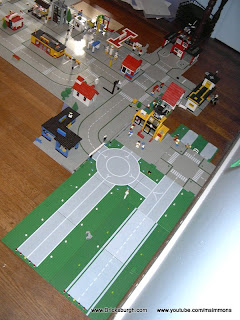 This is an idea we are strongly considering for the new town, to make the major industries of the Bricksburgh clustered near the airport.  With the addition of the cargo terminal this would seem to make sense.  However, there is something to be said for deliberately "mis-locating" businesses so that you can then have an excuse to drive the trucks through town and otherwise create a little commotion now and then. 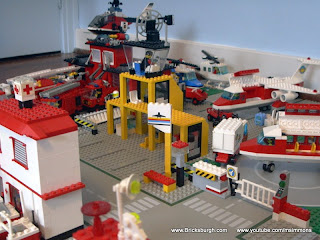 As the town grew, we couldn't expand the room it was in so we had to increase the density of the structures and tighten up the layout.  The result was the relocation of the police station so that the terminal could rotate closer to the wall.  The runways were laid out the same but the town's center moved to just the other side of the terminal (the hospital shown here faces the town square).  This version of the airport (which can be seen in the 2008 tour video at the end of this post) lasted until the town was relocated on the table.  The upside of this compact layout was a nice cargo storage area near the fire station. 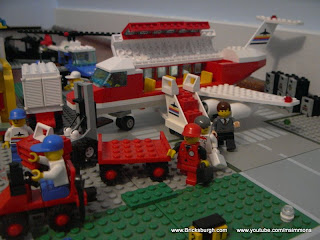 The only really awkward part of this arrangement was that all the cargo traffic had to cross between the passenger jets and the terminal to get from the gated street entrance to the cargo area.  Not only was that a hassle and a danger to the passengers themselves, but it also meant tired airport workers were swinging forklifts around the fast spinning rotors of the helicopters! 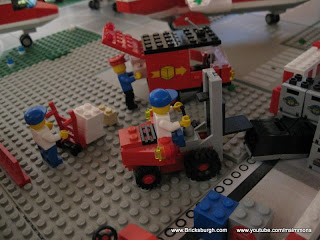 We solved those safety issues with the move to the table top.  The cargo area was immediately inside the gated street entrance and away from the passenger terminal.  We had LOTS of room storing cargo and the various vehicles and lifts that moved it around the airport.  In fact, it was so generous the airport fire truck was parked there as well.   The helicopters were then parked on the far side of the street entrance, far away from all the other traffic in the airport.  The only problem was when vehicles drove to the helipads they had to use the one runway to get there and back.

So those are a few of the major issues concerning where the airport goes.  If you'd like to see the airport as it looked in the past, the videos below will show you the "floor layout" from 2008 and the final version of it in 2011 shortly before the table was dismantled.

Thanks for visiting us here at www.bricksburgh.com and check out the videos on our YouTube channel at www.YouTube.com/MSIMMONS.
at 10:50 AM