It has been a busy week around here... so I'm late again.   We will work to correct that.
I found some pictures of what our airport looked like in its earlier days and I thought I'd share them.  These also will help me come in for a "soft landing" this week because... well, there is still a lot going on around here! I hope you enjoy some scenes from our airport's history. 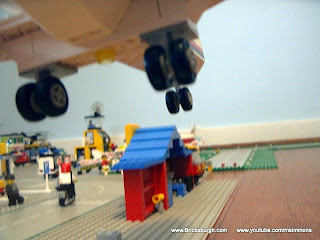 In the early days, the Post Office way right at the end of the runway.   No doubt this caused many of our postal workers quite some distress. 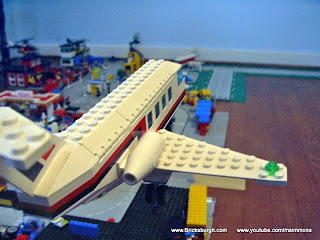 Here's a better look at the approach (the other runway was for takeoffs only because over-running it would put your jet INSIDE the terminal, which is bad for business).   Every now and then the postal workers would throw packages at the incoming jets. 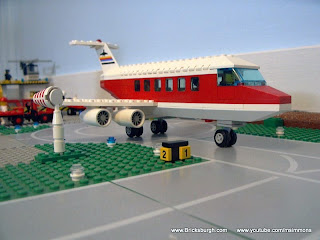 Once on the ground, the facilities were quite nice and spacious.  We made the runway sign from some spare parts that were laying around -- I think it looks pretty good and it sits on the airport tarmac today (on the table layout). 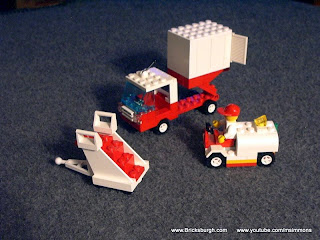 These are some of the support vehicles - before they received their stickers.  You can see how much better they look if you watch our airport tours from more recent days:  Airport Tour 2011 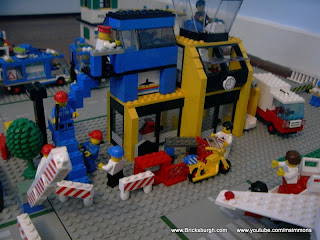 This is the original airport terminal (in yellow) with a temporary control tower being built on top (in blue).  The story behind this was that the original control tower was receiving major upgrades to all its computer systems and would not be usable.  You can see crates of new computers sitting on the ground and contractors readying the temporary tower for the switchover. 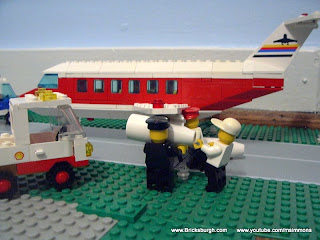 Replacing a jet engine requires the help of a few friends... including the pilot.   After all, how heavy can a jet engine be if it's made of plastic?? 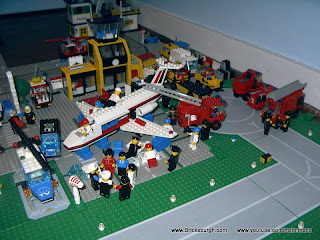 As you can imagine, that approach over the Post Office led to it's share of accidents.  This white jet crashed and broke apart.   The accident investigators carefully reassembled the wreckage so they could determine what went wrong. 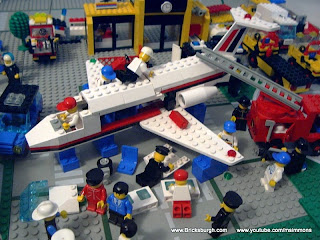 You can see the fractured jet is held up and together using those blue pylons and supports. 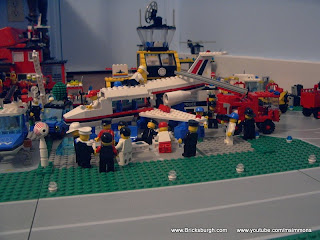 Eventually the crash was blamed on a faulty front landing gear.  The gear collapsed when it touched down and when the jet veered into the grass beside the runway it broke into two large sections. 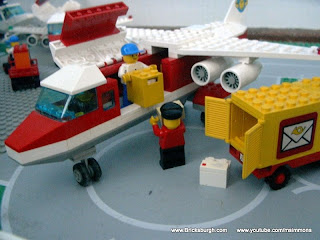 In addition to passenger traffic, there is a lot of cargo that comes through the airport.  The town, after all, is an island... so everything must be shipped in by air or water. 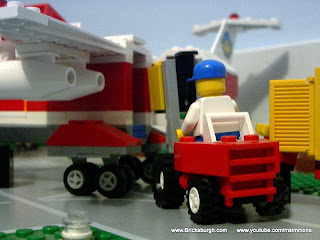 That also means, naturally, that everything must also be shipped OUT by air or water. 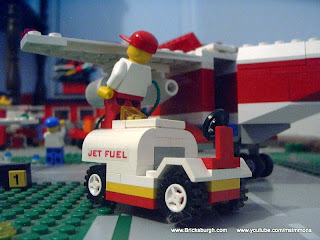 This cargo jet is getting refueled and will be taking off soon.  Hopefully they notice the tail door is still not in place!

Thanks for visiting us here at www.bricksburgh.com and check out the videos on our YouTube channel at www.YouTube.com/MSIMMONS.
at 12:09 PM