You may have noticed in the header for this blog that we are TWO generations of Lego fans.   I am the first generation  (Matt) and my son is the second generation (Tyler).   Somewhere I have pictures of my introduction to Lego in 1982, but I can't find them at the moment.  What I do have are pictures of the first time Tyler received my hand-me-down Lego. 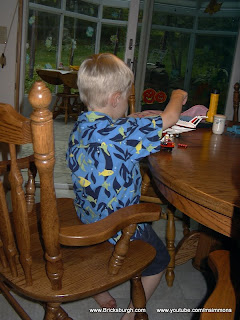 It was a typical weekend visit to my parents' house, where my Lego had been sitting dormant in boxes for at least 15 years.  I'd last packed them up sometime in Germany in early '90s and had since married and had Tyler-- who was already 5 1/2 years old.

I finally decided he was old enough to try some of the REAL THING after years of messing around with the large chunky MegaBlocks.  I chose just a couple sets at first, the white passenger jet and a red delivery van.  I figured if anything would entice him to join my passion from when I was a kid it would be planes and trucks. Mission accomplished, to say the least!

We packed up all the Lego and carried them back to our house where they slowly emerged from the basement.  I didn't want to overwhelm him too much so I gradually plunked new sets in front of him at random intervals. 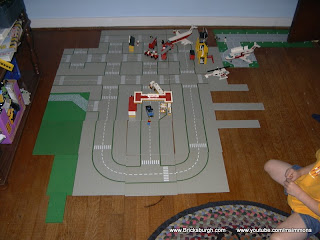 As you may have guessed.... those intervals quickly squeezed together.  It's hard to keep Lego boxed up and unloved!   The road plates appeared pretty soon to give the town some form and once the road plates started showing up... it was a pretty quick progression from there. 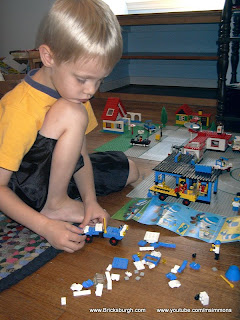 One building led to another, vehicle to vehicle, and before long.... the town was reborn!

Thanks for visiting us here at www.bricksburgh.com and check out the videos on our YouTube channel at www.YouTube.com/MSIMMONS.
at 12:43 PM