It is pretty hard for us to sneak up on anyone lately.  Our Subaru has a hole in the exhaust and rumbles and roars like a Top Fuel Dragster (no flames though, which is good).   With the weather being so wet and snowy I have not been able to attempt any repair, so we're just thumping around town scaring all the little kids until I can.   So... in that theme, I thought I'd share some older pictures of our Lego mechanics hard at work... mainly because I wish I could send a small army of minifigs out to fix our real car.  Wouldn't that be great?! 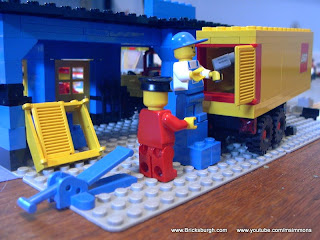 Those guys are replacing the rear door frame of the tractor trailer.  Somewhere along the line the original frame had a tab broken off so we ran it for a while with the red one until I could buy a replacement.  Tyler wasn't content to just swap them though, as I found this set up. 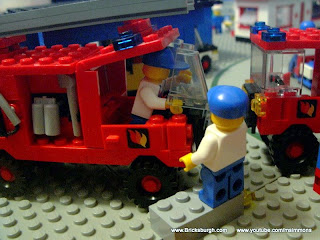 Replacing a windshield on a Lego vehicle is a lot easier than on a real car.  After all, the roof just lifts out of the way!   As I recall this fire truck collided with a police van as both rushed to the same emergency.  Somewhere I have a picture of the van too...  but not handy.  Tyler set these guys up also. 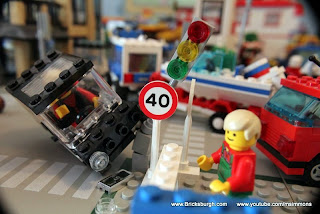 This guy is on his way to the repair shop.  I happen to like how his hands are "flailing" at the wheel as he knocks over the traffic light!