Growing up I spent a lot of time in Europe and each time we returned to the US is was always striking to me how many pickup trucks were around.  Pickup trucks are a very American vehicle and you don't realize how common they are until you go somewhere where they aren't. 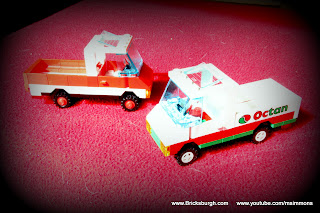 Lego is not an American company, obviously, so it took them a long time to come up with an actual pickup truck in a set.  We have trucks in several different sizes in our town, but the most useful is the one we're going to look at today.  Click on through and we'll show you how easy it is to build your own.
As usual, we're pairing these pictures with a video on YouTube.  The video will better show you the mechanics of actually building the truck, whereas here we will discuss the design of it and-- if you will-- the "history" of classic town style pickups.  Firstly, here's the video:

I realize the "parts shot" goes by very quickly in the video, so here's a better look at all the parts (with apologies for the bad background color choice!): 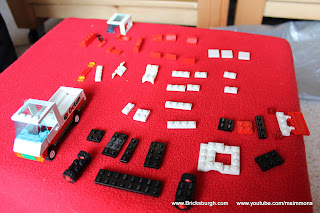 Considering that Lego designers in Europe would not have much first-hand experience with pickup trucks, it isn't surprising that it took them several years to develop one.  If you figure the first classic 4-wide car was launched with the Police Station set in 1979 (as discussed earlier), the designers didn't have a pickup truck--truly-- until the 1988 Metro Park & Service Tower set#6394.  It took them 9 years!  We don't have that actual set, but we do have several that we've made based on that design. 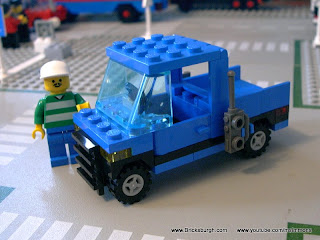 This one is closest to the Lego design, but we've added a big grill to it and simplified the color scheme.   As with all our trucks, the bed is also lined with tiles to give it a more finished look.  The other version of this truck has a cleaner nose and a "high boy" type roof.  Eventually, that one (which is black with a yellow chassis) will have its cargo bed converted to an enclosed box to match the roof height... once we acquire the parts.   The truck doesn't use a car chassis plate but it does have the same overall dimensions as a standard car.  While that size is useful, it doesn't quite have the visual mass or height (over the similarly sized car) that a real full-size pickup would have. 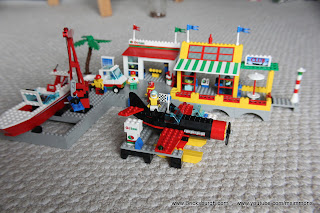 It took Lego designers another 5 years to come up with a pickup design that had the taller and longer dimensions of a full-sized truck.  That truck was a part of the Sail N'Fly Marina set#6543, which we've recently added to our collection.  We'll do a write up and video tour of it soon-- but for now I want you to concentrate on the truck parked on the dock. 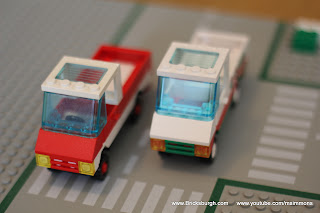 I'd known of the Marina set for years but we didn't have room to add it onto our town until after we moved. Prior to that, the truck design had caught my eye as something we COULD fit into our town and I'd developed my own version of it.  In doing so I went after a more utilitarian look and a traditional American color scheme from back in the days when I was kid-- when Fords and Chevys were sold with big stripes on them!  Originally the red and white truck did not have sunroof and had the basic clear plastic windshield.  Tyler optioned it up later from the local dealer, I guess. 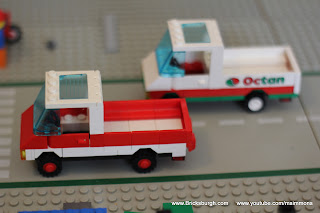 From the side you can see the van heritage of the trucks' design.  The short hood is really more typical of a European delivery van-- which is what the designers were used to seeing.  I actually like the shorter hood look and, besides, I think trying to elongate the front of the truck and moving the front axle forward would be problematic. 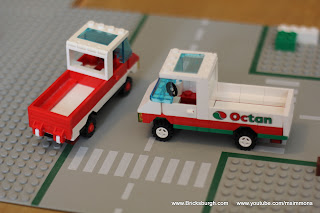 The Octan truck, the original design, is more complex with the extra color thrown on.  I think that combines with the white wheels to give it a decidedly more upscale look.  Now that we have two in town, I think I'll be lobbying Tyler to put a solid roof and clear windshield back on the red and white truck and further differentiate it as a work truck compared Octan's snazzy promotional truck. 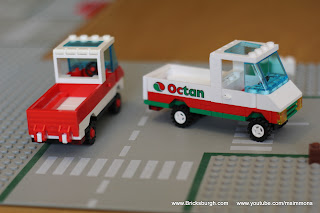 When I first built the red/white truck, it had the same white tailgate as the Octan truck.  That tailgate has since been installed on a police department pickup truck project-- yet another truck design of our own making, this time, which you can see here:
Finishing that police truck has not been the priority we thought it would be-- moving changed all that!  We did make instructions of it and will return to that project later.  As you can see in the video, the overall design is very similar to these trucks, but with a beefier nose.  The front wheel placement is the same, however. 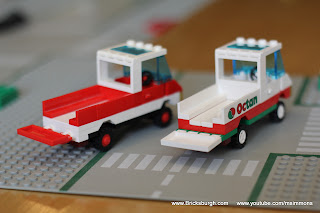 Since the white tailgate is was installed on the police prototype for so long, Tyler found a red tailgate to put on the red/white truck in the meantime.  Turns out, the red tailgate actually looks better too!  The hinge is different as it locks in various positions and will hold itself there.  The white tailgates will not hold their positions reliably. 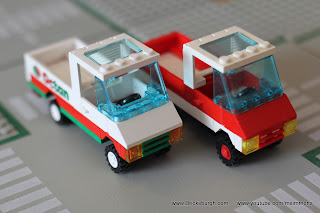 Another design variation we are considering is putting round headlights on one of the trucks.  I think the Octan truck would look really good with clear round headlights.  I just have to convince  Tyler! 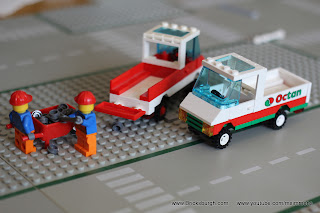 Well, it's time to get back to work!

Thanks for visiting us here at www.bricksburgh.com and check out the videos on our YouTube channel at www.YouTube.com/MSIMMONS.
at 12:06 PM