No doubt playing off feelings of nostalgia at the impending retirement of NASA's space shuttle program, Lego pushed a new set onto store shelves in 2010, set #10213.  Its size is epic and the details are superb, but that also means it won't fit into our classically sized town.   So what IS the best space shuttle set for a small island with ambitions for space exploration?  Lego certainly made a number of shuttle sets over the years... but only one can be the best.    Here's a hint: 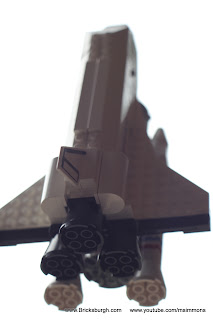 The best of all those sets was The Shuttle Launch Pad #6339... which we recently acquired for Bricksburgh! 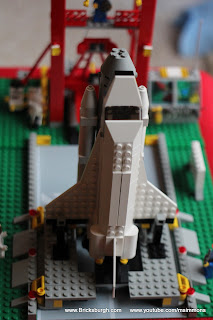 It really has EVERYTHING.  You get the very best classic-style space shuttle, a complete launch pad/mission control facility and-- even more important-- the launch tower has a crane and all the rigging necessary to completely reset the shuttle for its next launch.   That last factor is what makes this the best all-around shuttle set, as I'll explain later.   To better understand how the recovery mechanisms work, check out our YouTube video:
So, what makes it so great?   I'll compare and contrast the various sets later, but first let's look at what makes this set the BEST.   Check out all the details: 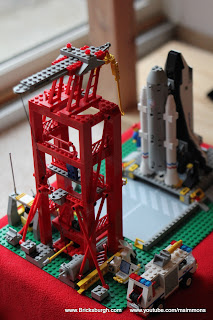 The launch tower is a massive structure.  It stands very high (the equivalent of a 5 story building) and has a complex set of braces to keep it up there.  Not only does the crane and fork mechanism work well in the recovery process but the designers included railings and brackets that make for great catwalks for the workers. 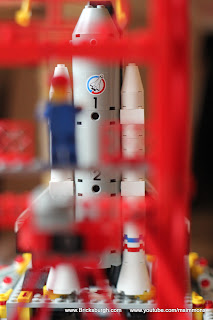 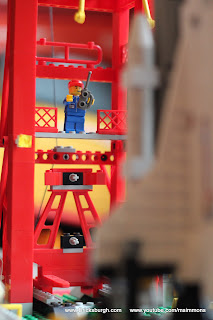 The whole tower is really well thought out.  Those two black/grey pin assemblies are what hold the external fuel tank and booster rockets onto the fork. 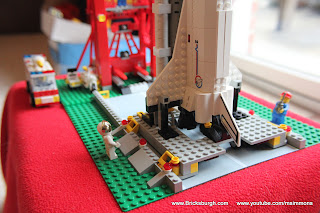 The pad itself is a standalone component of this set.  It can be moved in and out of the launch tower area on hidden wheels and locks into place, either against the tower or out by itself, using those yellow brackets. 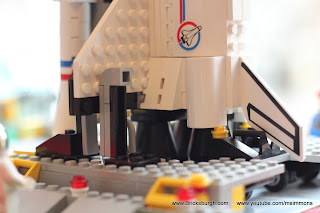 A distinguishing feature of this pad is the clever brace and bracket system.  The wings are held securely in place by two sets and the tail is held by another which, combined together, keeps the shuttle assembly rigid while the pad is rolled in and out from the tower. 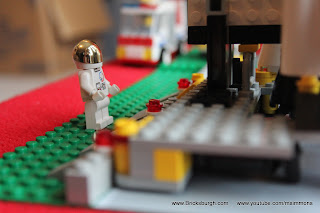 "If anything is lacking... it's a ladder." --anonymous astronaut
'Tis true.  Unlike most Lego vehicles there is no easy way to get the pilot into the cockpit-- no hinged door, no ingenious alternative to just ripping the roof off like a baboon would. 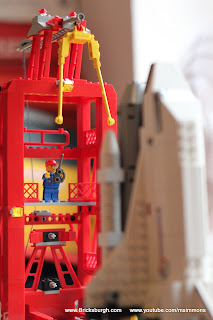 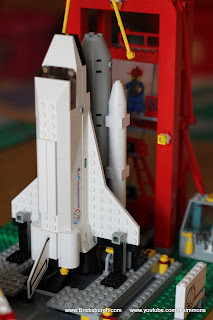 Here's a little better look up at the tower's crane.  It can track in and out from the tower facade and the arms attached to it can rotate in and out so that they can grasp the attachment points on the side of the shuttle and external fuel tank. 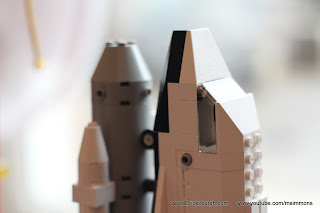 You can see the attachment points a little better in this picture.  On the REAL shuttles there is an emergency exit door on the lower deck that has a round window, right where the attachment point is on the Lego shuttle-- not sure if that was intentional or not, but it worked out well! 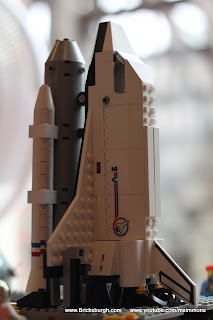 All right, it isn't all good.  There are two major flaws with this set.  Firstly, even though obviously patterned after a NASA orbiter, there are no stickers or markings anywhere that have either a NASA logo or an American flag.  That's quite disappointing and something we'll probably make our own stickers to fix.  Other shuttle sets do have those markings, to their credit.
Even more obviously, the external fuel tank and booster rockets are grossly undersized to the shuttle.  While understandable given that the designers of that era generally worked with existing part sizes (as opposed to just making new parts all the time... like they do today), it's still a little strange and takes some getting used to.  That said, all the components do separate from each other and the shuttle in a realistic manner so the "playability" of the set is absolutely there. 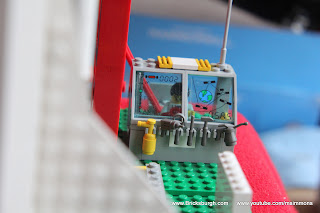 Hiding beside the launch tower is this little coffee-drinking scientist in Mission Control.  The fact that Lego even included Mission Control (a grand investment total of about 25 pieces) makes this set unique.  I don't think any other set has even a token control room.  The standard windows are dressed up with some really clever stickers that feature maps and a countdown timer. 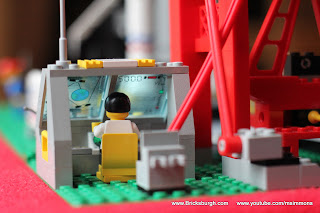 There is also ample room to expand the control center behind the pad some more and we will likely do that. After all, whoever heard of a control room only having one person!

Okay, so we looked around our set a bit... let's try and put some context around it.

The best NON-launch pad based space shuttle set is-- without a doubt-- the Shuttle Transcon 2 set#6544.  When I was a kid growing up in Germany, I remember seeing the shuttle on top of its Boeing 747 transporter when it visited the 1983 Paris Air Show.  It wasn't the only time we went to the air show during our years in Europe, but it was an intense feeling of pride to see such an impressive symbol of America when the Cold War was still hot.  But I digress....  The Lego set captures the "mounted" shuttle and transport jet combination perfectly in the Classic style.  It looks impressive and important, just as it should.  We don't own this set yet but I wouldn't rule it out!   The shuttle itself is identical to the one in 6339.   The Transcon jet is absolutely perfectly put together, I can't see any way to improve it.  Even the towing cart is cool.

I mentioned at the top that there were "a number" of shuttle sets.  Many of those were from the old "Space" theme and their open cockpits weren't realistic at all.  Likewise, Star Wars brought us some other shuttle sets that would not feel at home in the Town "universe" (pardon the pun).  Leaving those out, there were just a few other Town themed sets that featured shuttles... and they are, in comparison, quite disappointing.  These were great sets too-- don't get me wrong-- but considering that the shuttle was such an important part of the sets, it is surprising that the shuttle itself wasn't better.

Launching Crew set #6346 answers the question of "how do I get the shuttle to the launch pad?"  Unfortunately, the shuttle itself has a very awkward looking vertical stabilizer (aka "tail").  The engine pods are also very clumsily rendered and the wheels are the same ones later used on airport baggage carts-- completely inappropriate for a space shuttle!  On the upside, the vehicles are quite good, especially the flatbed trailer with its simple braces for the shuttle's nose.   We actually used the pickup from that set as the starting point for a Lego version of our beloved Subaru Baja (seen earlier). 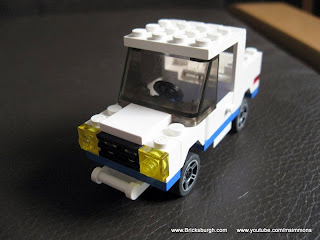 Don't ask-- we'll do a tutorial on that someday too!

The other launch pad based space shuttle set was simply called Space Shuttle set#1682.  At first glance it looks like a winner.  The launch tower is impressive in all its girded glory and the swinging arm is a nice touch.  Even the pad looks well planted and well modeled after the real deal with hoses and clamps on it.  Look more closely and the flaws start to show.   While the shuttle uses the same basic boosters and fuel tank as 6339, the craft itself is a clone of the one in 6346.  I can see what the designers were trying to do with the jet engines put on backward and all that, but this is just an ungainly and overly clumsy design.  The robotic arm might be more realistic but it isn't better.  It also turns out that the tower can't do anything.  The crane can't really position the shuttle and the swinging arm is just for looks-- it doesn't actually DO ANYTHING!   C'mon Lego, that was cheesy.  About the only thing interesting in this set is the little cart and the sticker sheets that actually have American flags and "NASA" logos. 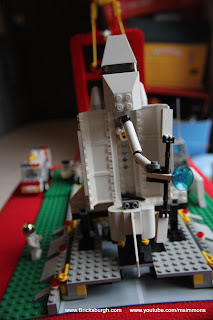 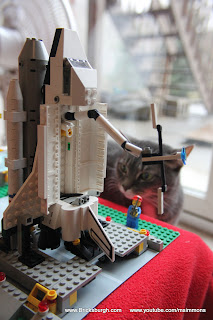 Look who stopped by!  Nosy Sophie (aka "Catzilla") just couldn't stand not being a part of our activities the day we took these pictures and shot the video.   She's like that.  I almost forgot to point out that the robotic arm on our shuttle is nicely modeled inside the spacious cargo bay of this shuttle too.  Articulated joints realistically can move a stowed satellite out clear of the orbiter and allow it to be deployed. 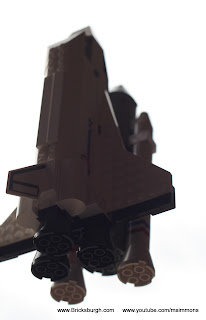 So that's our new shuttle set.  We can't wait to see what kind of stories we might be able to tell with it in the future, once the town is all set back up.  Keep watching the videos and come back again!

Thanks for visiting us here at www.bricksburgh.com and check out the videos on our YouTube channel at www.YouTube.com/MSIMMONS.
at 11:17 PM