Every disaster or war movie has that great scene in it-- often at the end-- where a leader stands before his/her people and declares that they will rebuild their land.
We were just watching the end of "Deep Impact" last week and President Morgan Freeman stood before a ruined Washington, chronicled how a comet impact had really screwed with property values in the area but that they would rebuild it.  His resounding battle cry?  "So now, let us begin."  What??   "So now, let us begin?!?"  That's the best President Morgan Freeman can muster??  Hasn't he seen his own movies??   Did the scriptwriter forget to finish the speech?? 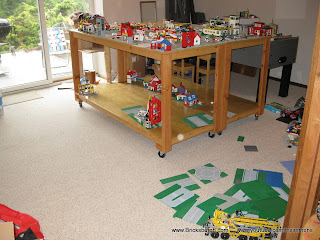 Well, like that ruined Washington in the movie, Bricksburgh was completely destroyed about a year ago.  A YEAR.  It has been a long time.  Finally our tables are complete and nothing else stands in our way to reconstruct our great city.  Plate by plate, brick by brick, we will erect a new city, with new sets, new buildings, and more space than we ever had before.
With nothing to stop us and no reason to delay-- So now, let us begin.

<Yawn>
I actually dozed off in the middle of my own speech.  I just can believe that the movie had such great special effects culminating in such a wasted moment.  Alas, we're not here to cast criticism on marginal disaster movies.  We're here to talk about how the town is coming back together. 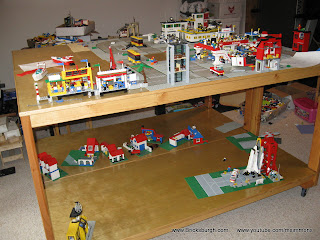 So, here's the town as it looked just this morning.  The tables have received the final two coats of semigloss poly and have dried (though they still smell freshly sealed... but it is clearing up).
They look pretty good, right?
As I've explained before, the two tables are on wheels and can hold 3 plates across one way and 7 plates the other on all 4 levels.  The town will be laid out so that the tables can be joined side by side, end to end, or any combination, like an "L".  There is a LOT more room on these tables than we had on the old one.  A LOT.  I fully expect that we will be shopping pretty hard in the coming weeks to acquire more road plates and probably some airport runway/pad plates. 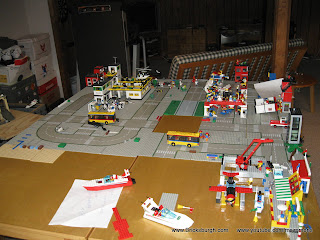 Here's a better view of the upper level so far.  To the left you'll see the new Police Station that we wrote about earlier or you can just watch the video tour.  To the right of that is the new racetrack/pit road area.  It will be built into the main part of the city and serve as street parking when there are no races going on-- much like Monaco, as I explained when we first got the set.  The hotel is currently planned for the far left corner where the beach plates are.  In the right front corner you can see the new Sail N' Fly Marina set we just acquired.  We'll show that to you in more detail in an upcoming post and video.  Of course, in the middle are our "famous" city buses (we will be posting instructions on those soon). 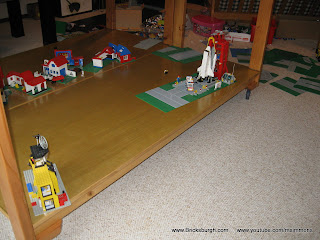 On the lower levels, things are still pretty unclear.  Most likely one table will host the airport and shuttle launch pad and the other table will have all the neighborhood houses, horse ranches, etc.  That still leaves us with no designated place for the harbor area-- which will not be in the same place as the marina.  Most likely, the harbor will share a table with the airport complex with the main road between them.   I think. 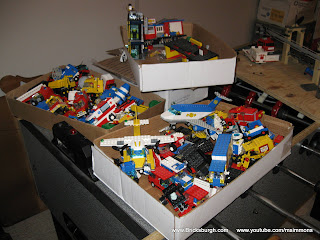 Still waiting in boxes are some of the various cars, trucks, boats, jets, etc.  These really just get in the way when we're laying out plates so piling them up off to the side makes for an interesting jumble.   Reminds me of the car pileup drawings in Richard Scarry books. 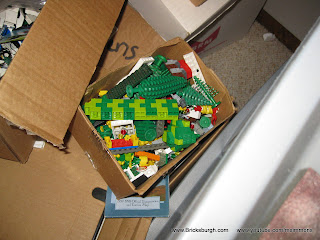 Look!  It's a box full of trees, flowers, and other little plant life.  There's more... but I thought it was funny that we ended up with a jumbled garden center here. 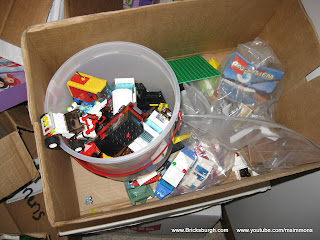 Hiding in another box are even more vehicles.  You might recognize the "A-Team" style van that was in our "Super Vans" video-- but aside from that everything else in the bucket is new...  something for you to look forward to!  We have lots yet to show you. 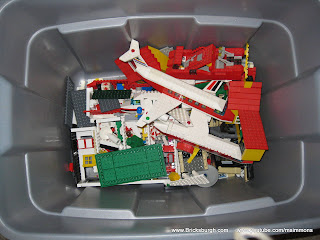 There are another 5-6 bins and boxes full of jumbled Lego parts and sets but this was the only one that looked somewhat impressive.  Peer deep into this bin and you'll probably be able to pick out all sorts of things-- the most obvious are the Hospital and Condo Building, but you can also see the TV Station jammed into the bottom.   So much rebuilding to do!

So now, let us begin.