Getting Out of Town

Looking for a quick getaway?   Where do you go when you already live on an island paradise?  Well, let me tell you-- away is AWAY no matter where you are!   So in the interests of following up our video on YouTube-- and as our 100TH POST--  here is the first of two posts covering our airport complex.  This one will follow a passenger's trip through the terminal, the second one will go into some details about our air cargo and freight capabilities. 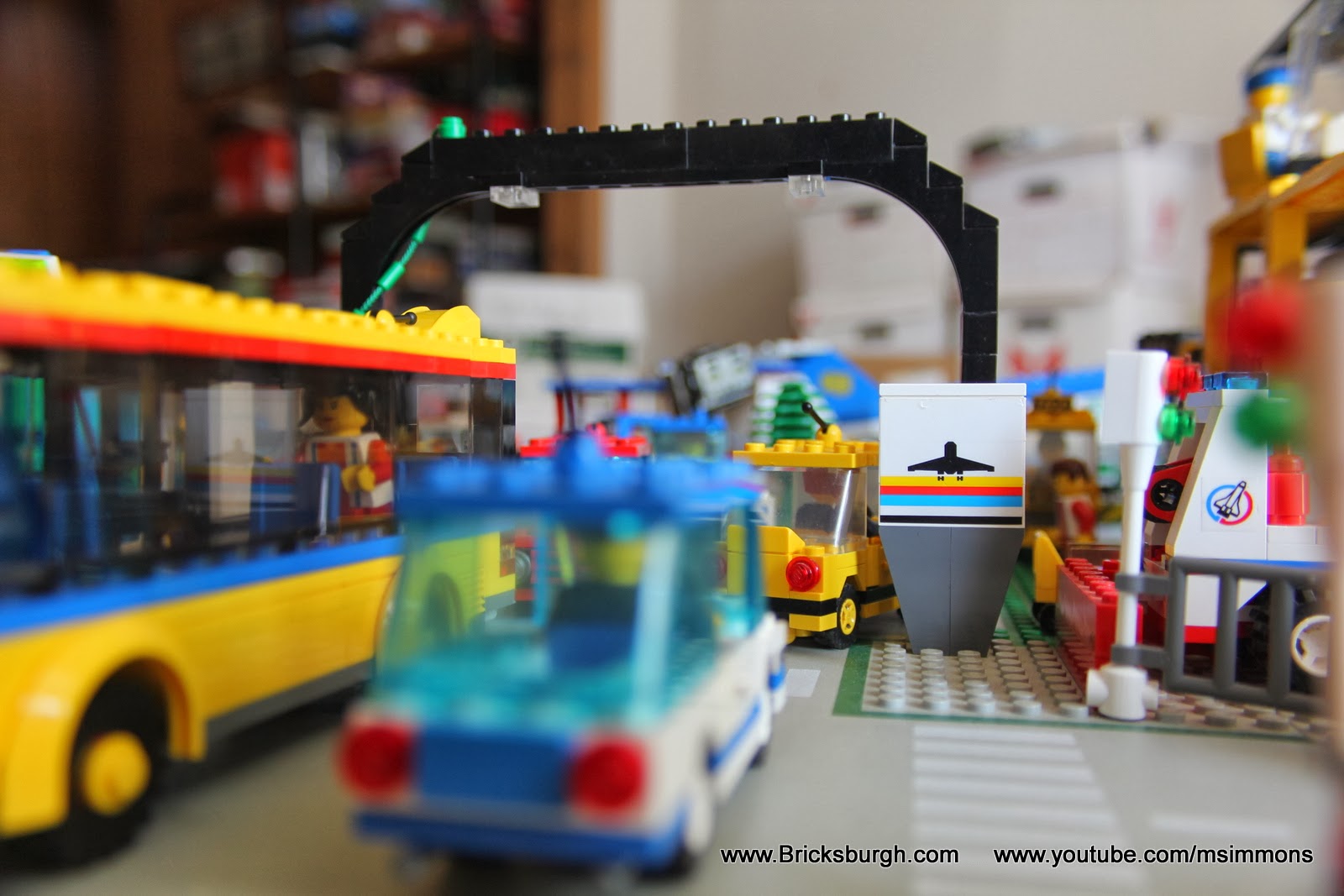 Minifigs looking to "blow this popsicle stand" will first need to find a way to the airport.  You'll know when you're there because of the big signs out front and the overhead lights (which will also have more detailed signs someday).  So come along, click through, and let's get outta here!
On the other side of the entrance is a looped driveway with ample room to pick up and drop off passengers. 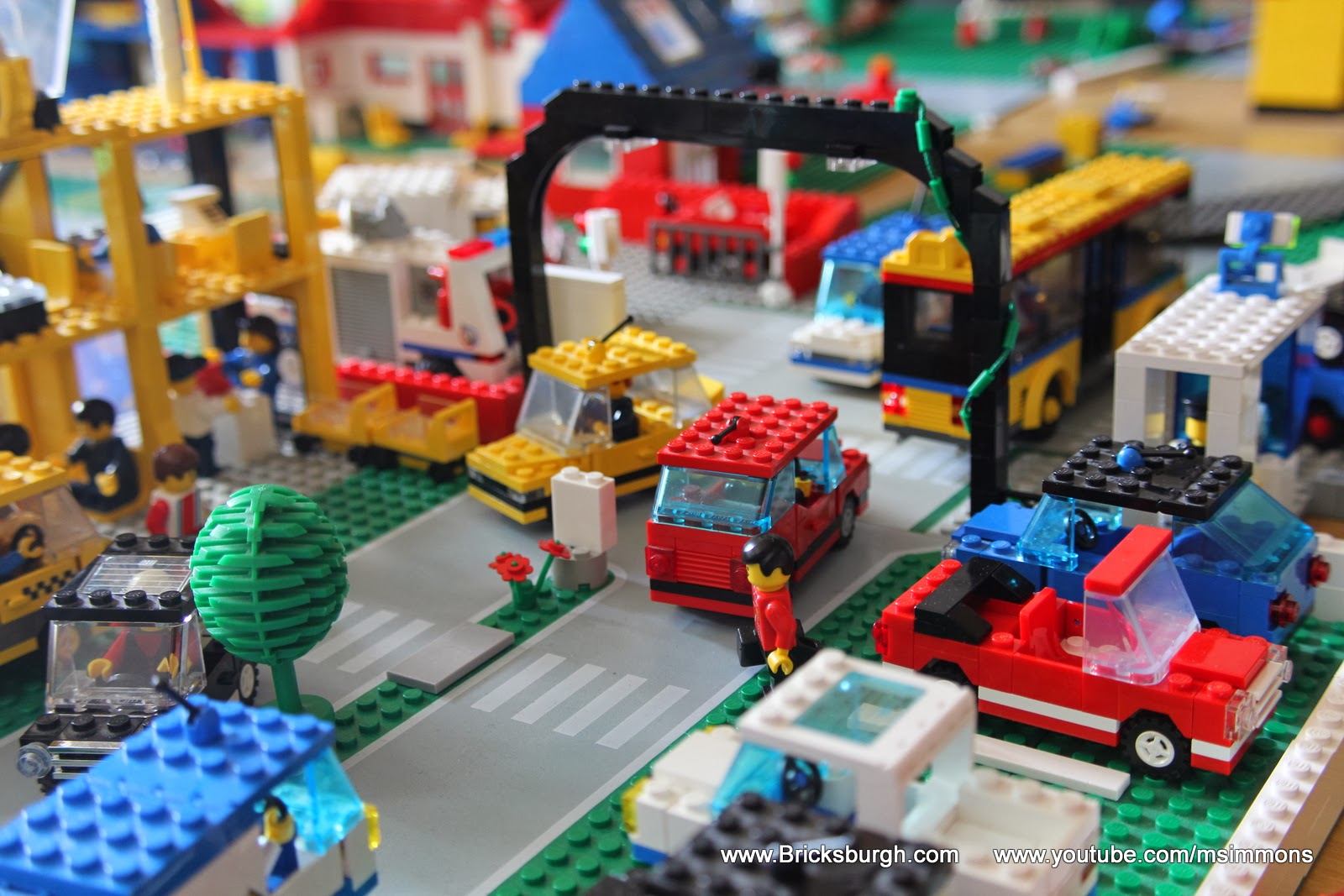 All traffic must stay to the right when going around the loop - it is a one-way street-- and yes, the buses are pretty TIGHT when they make the big turn around on the end! 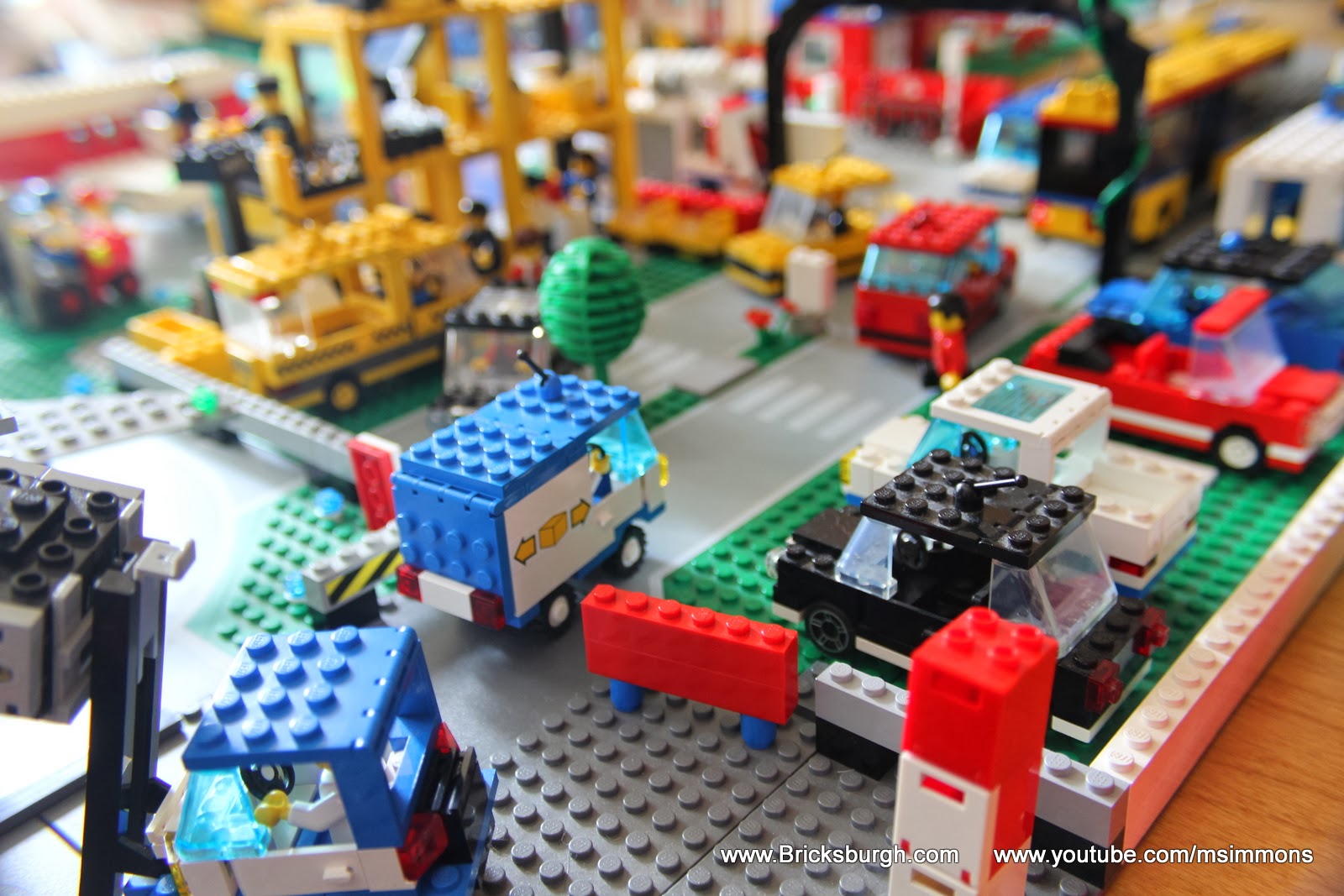 I just included this picture so you could see how the air cargo terminal is integrated to the main parking loop.  The van leaving the facility should really be yielding to the black car!  There is another gate to the complex that is outside the main entrance, but we'll show you that later. 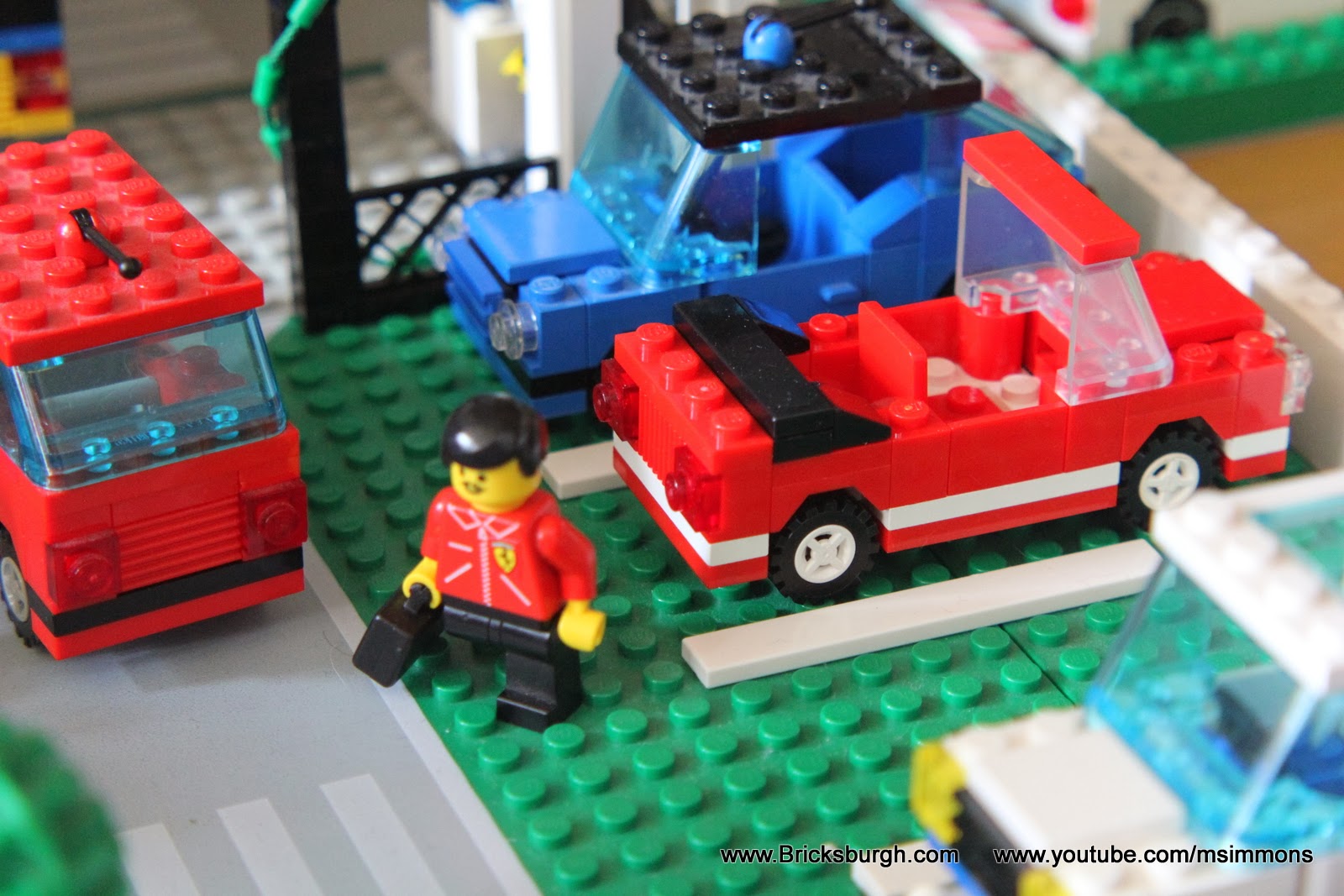 You can only leave your car at the airport if you are sure it won't rain... and if you take your steering wheel with you.  There is plenty of parking for your typical passenger volume but if more is needed, the harbor complex nearby has overflow spaces and a bus stop. 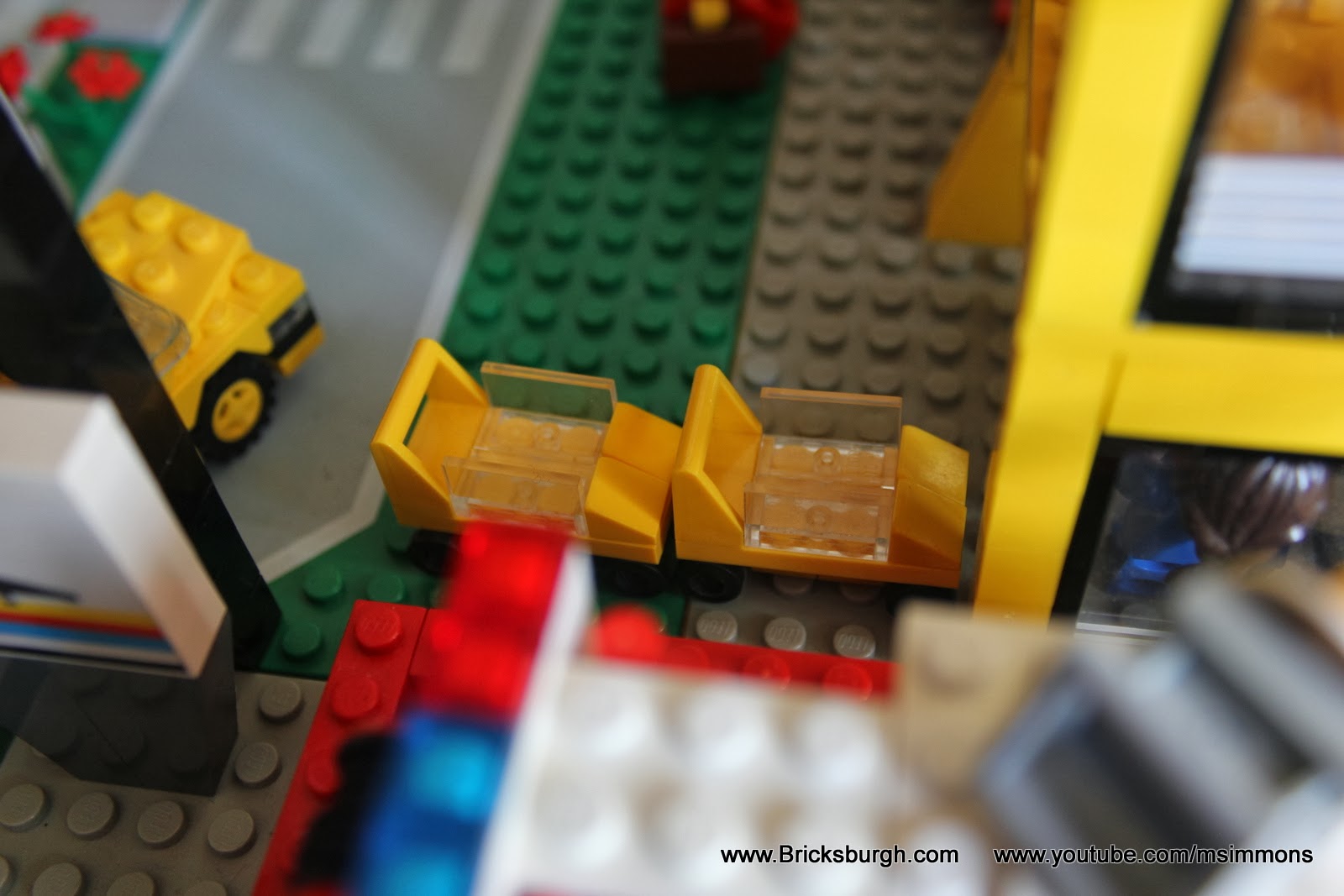 Well, you have to haul those suitcases into the terminal somehow.  Bricksburgh Airport is too small for SkyCaps, but we do have nice baggage carts.  These were a Lego set and have not been changed-- each holds 2 standard suitcases. 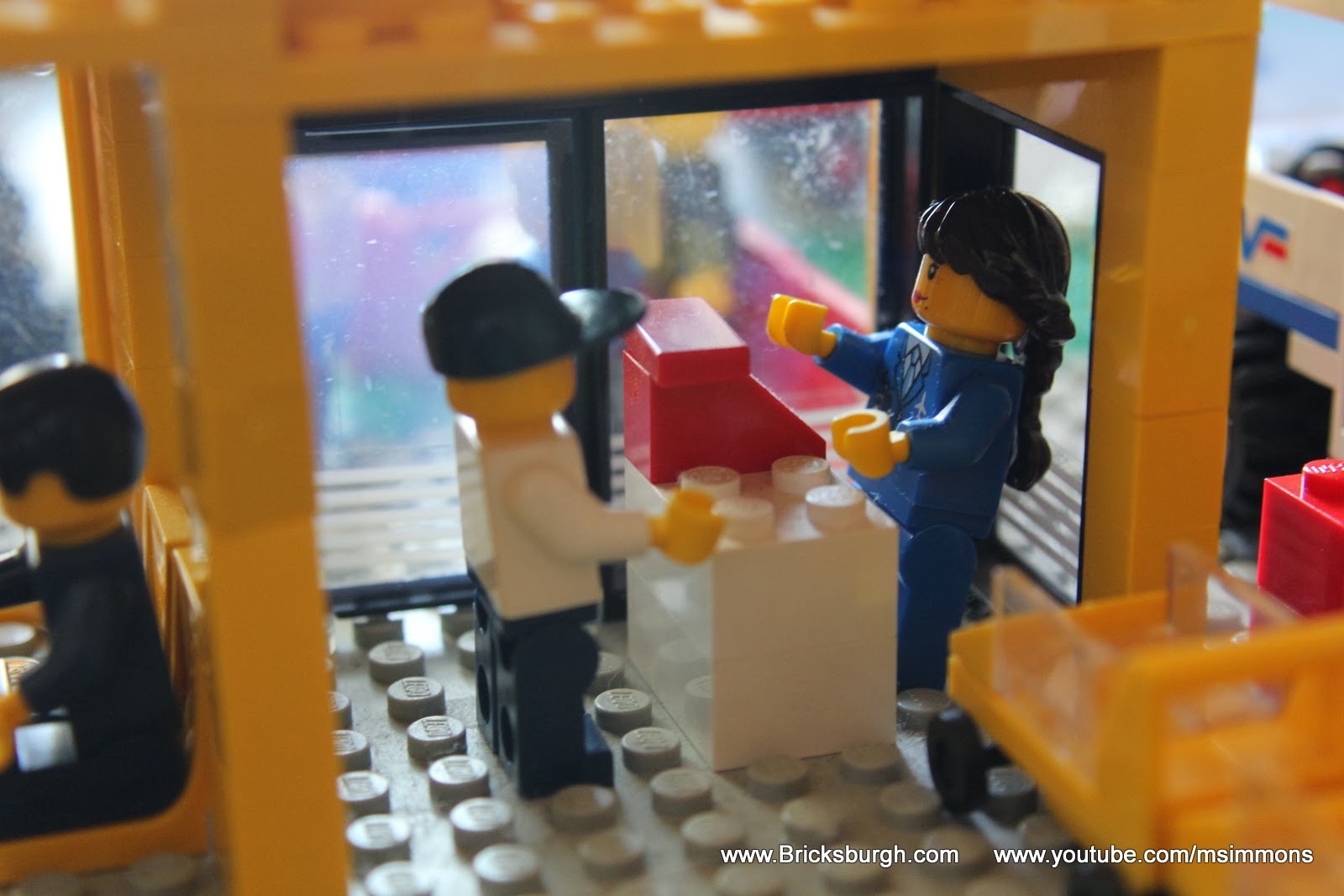 Our stop at the terminal is to check in and get our tickets.  There are several airlines and charters that fly in and out of Bricksburgh but through an agreement, all ticketing is done at the same desk. Next stop is Lego security.  You'll want to get your suitcases through the X-ray machine (which is hard to see here, behind the wall) and onto the baggage carts in plenty of time to make your flight.  A favorite detail of the airport terminal is this wall sign! 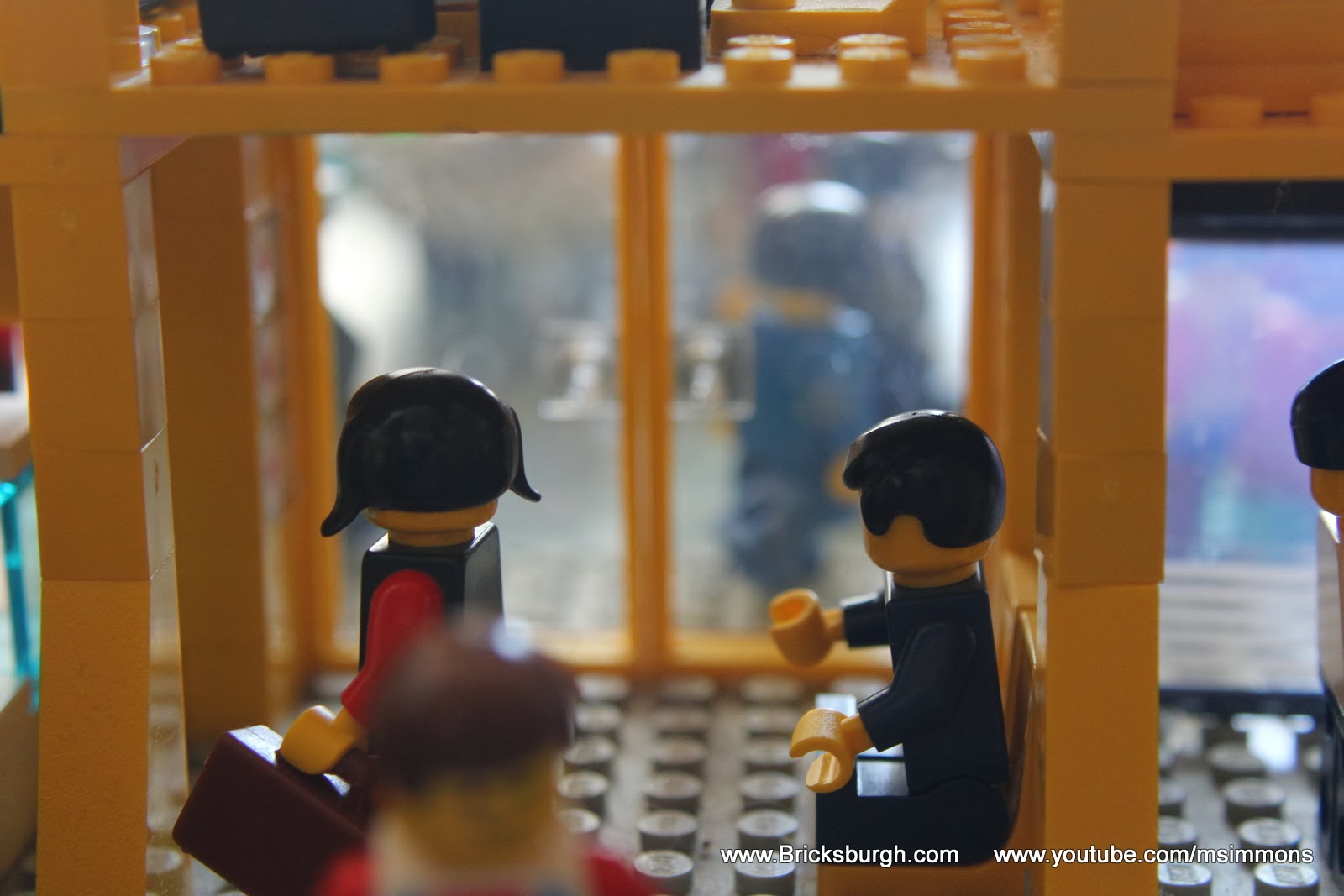 If you've arrived close to your flight's departure time you might want to just stay on the main concourse.  It doesn't look like there is much to do here because THERE ISN'T.   We haven't gotten around to installing televisions or flight status monitors yet--  but we will!  You'll note these large doors are not the set's original doors-- they're actually from a newer city bus!  We used them here so that we could make the terminal bigger by reusing the original door and windows to expand the 2nd floor. 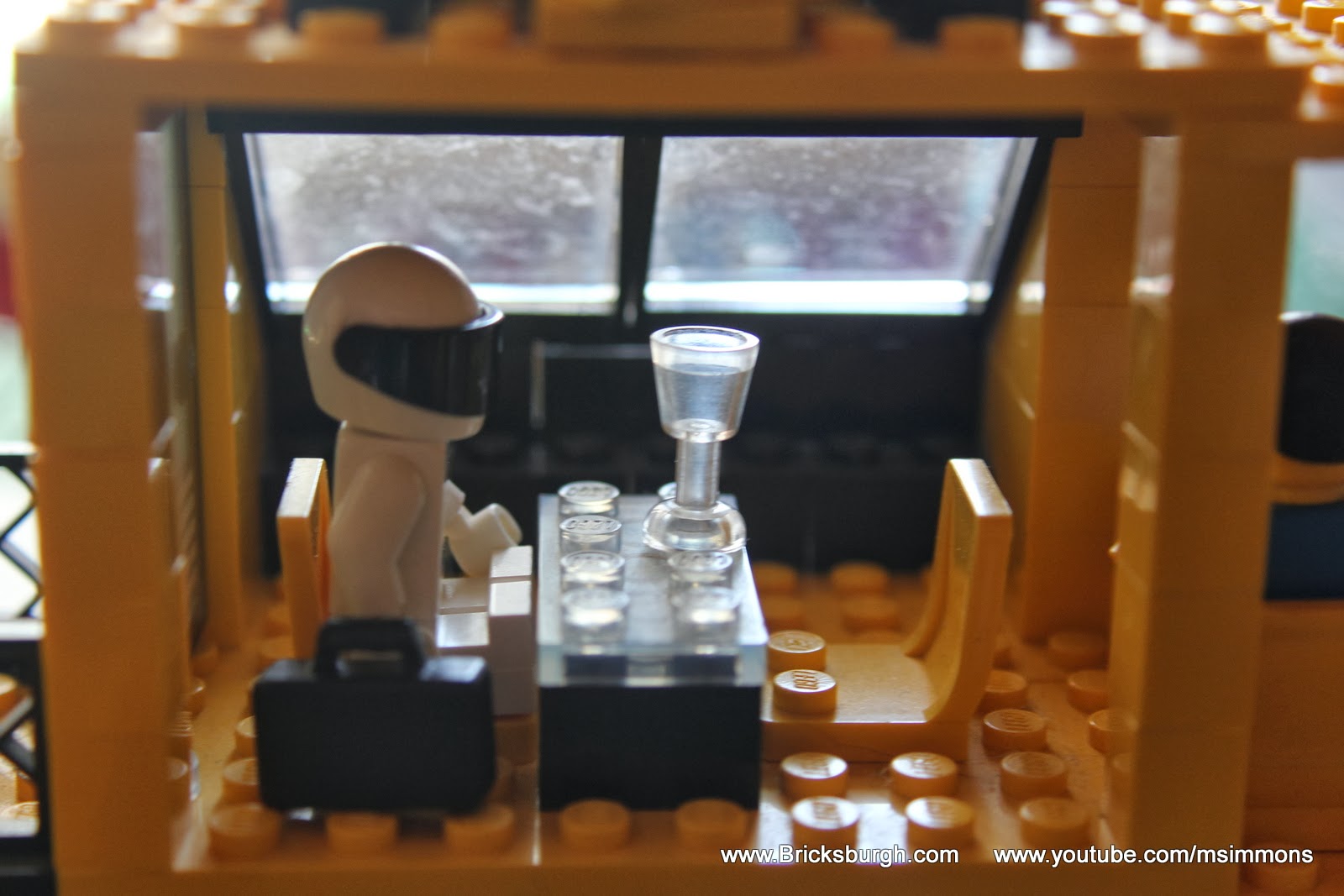 Some say that if you've arrived at the airport WAY too early, the baggage could be used for racing.  All we know is that there is a lovely lounge on the 2nd floor with some refreshments and an observation balcony. 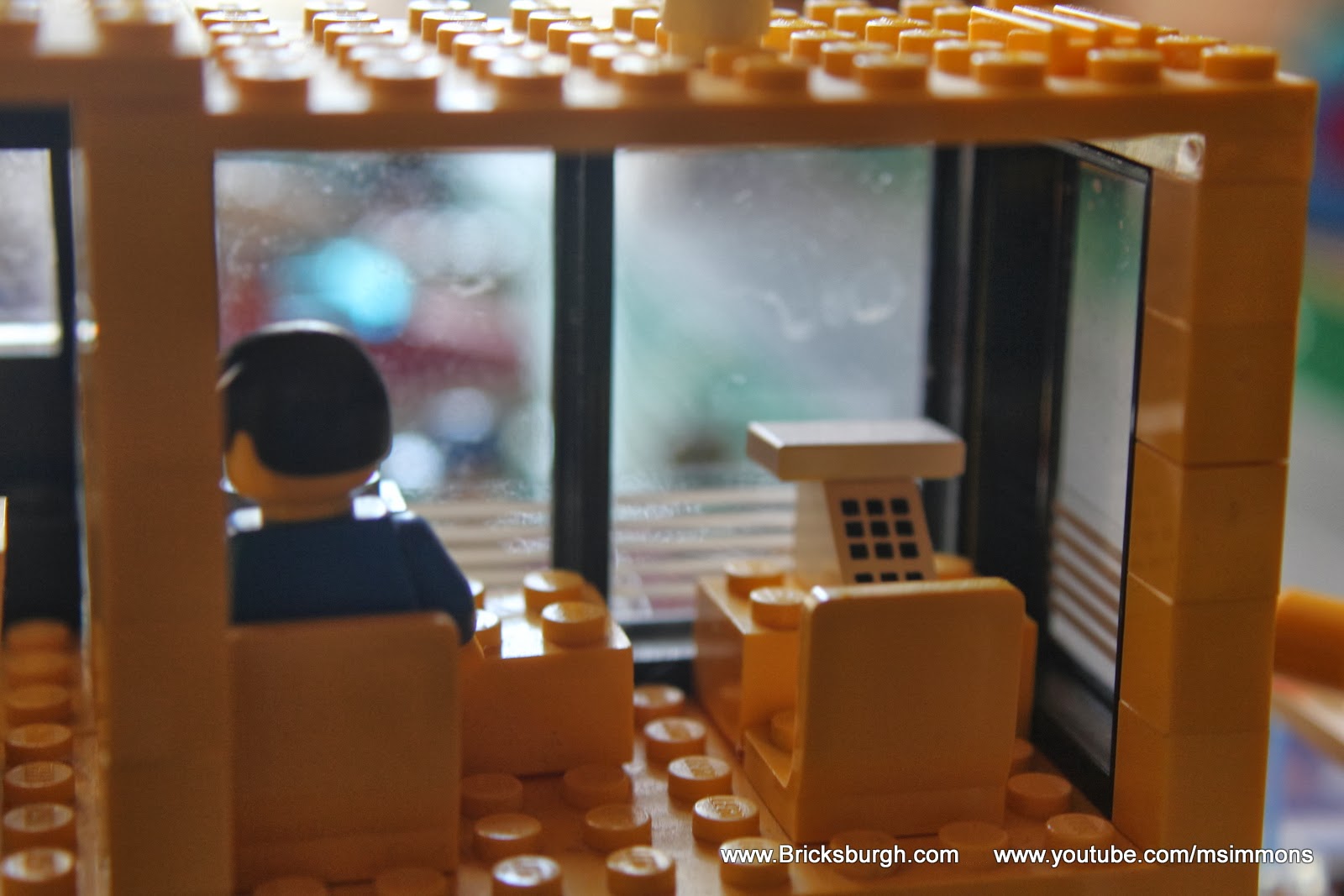 Next to the lounge is a business center.  In larger airports these are often exclusive to a particular airline but in our island paradise even the most modest traveler can avail themselves of a courtesy phone. 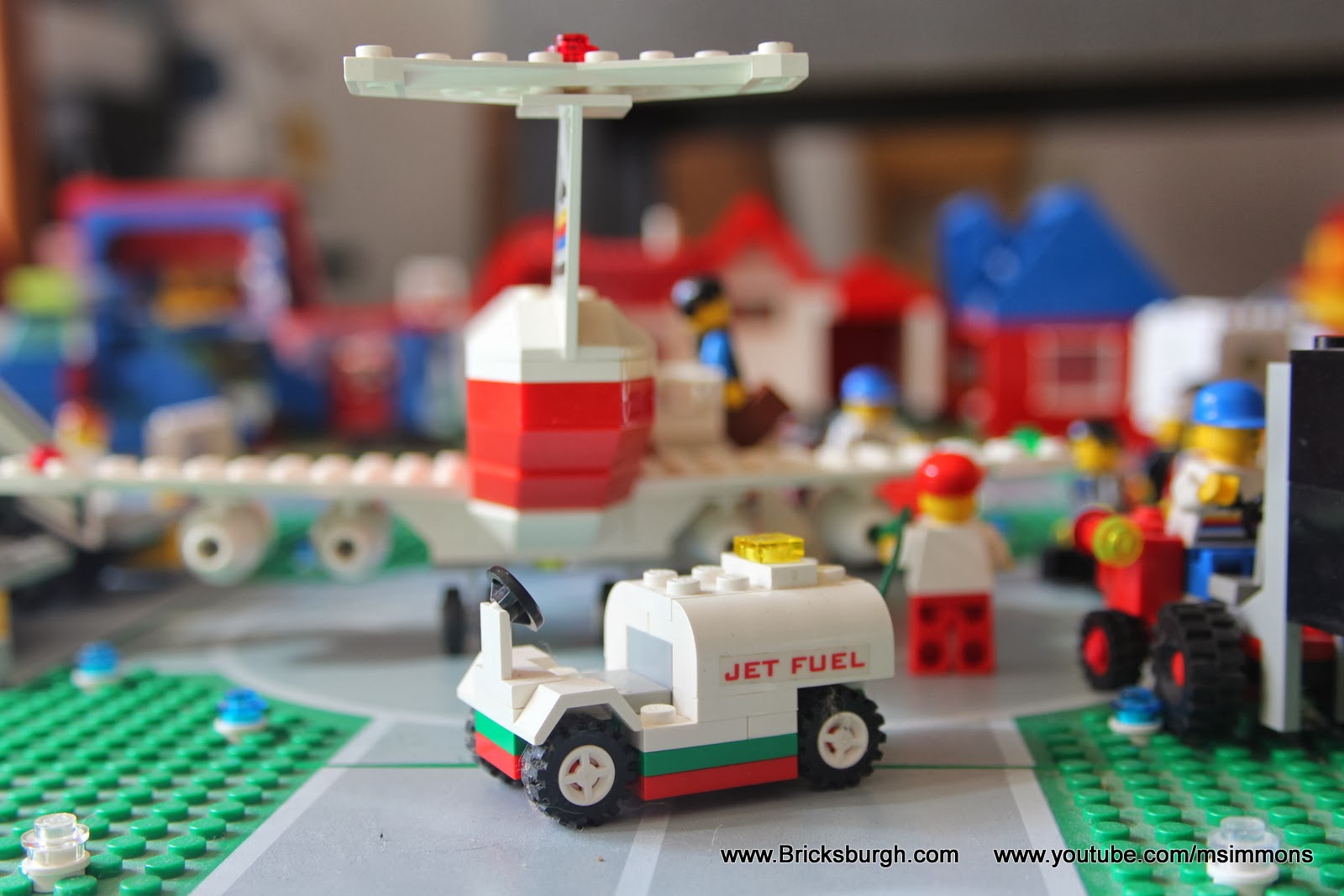 Meanwhile out on the ramp, preparations are being made to the jet.  Refueling is already underway... but I'm not sure why the fuel is being added directly into the engines.  This seems unwise and dangerous! 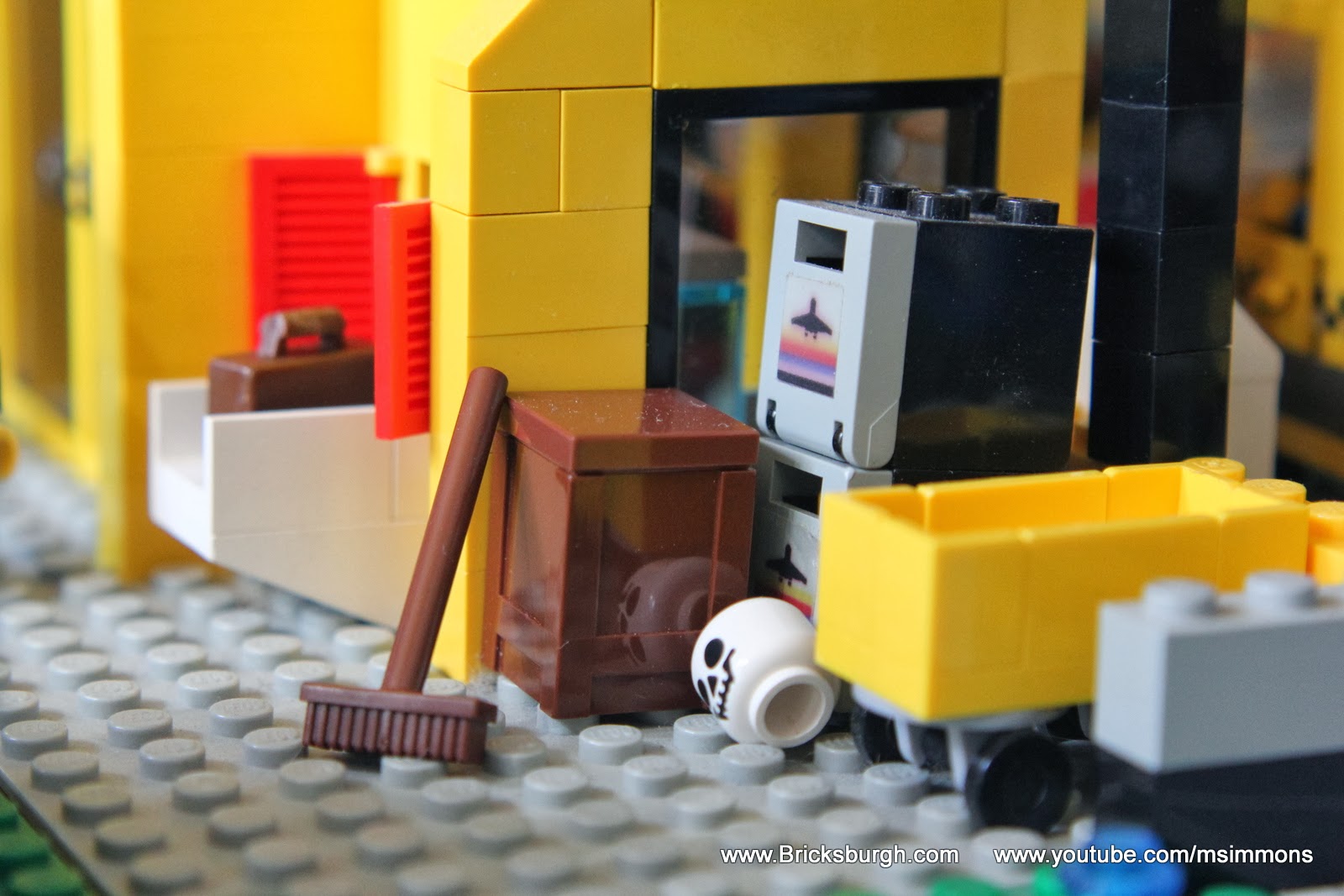 Baggage that has already been cleared by security and the X-ray machine will slide out through these doors to a waiting baggage cart.... which is not waiting.  So... this suitcase will probably fall to the ground and break someone's hair dryer.   Other miscellaneous cargo containers are stacked off to the side along with what appears to have been a victim of Bricksburgh's criminal element. 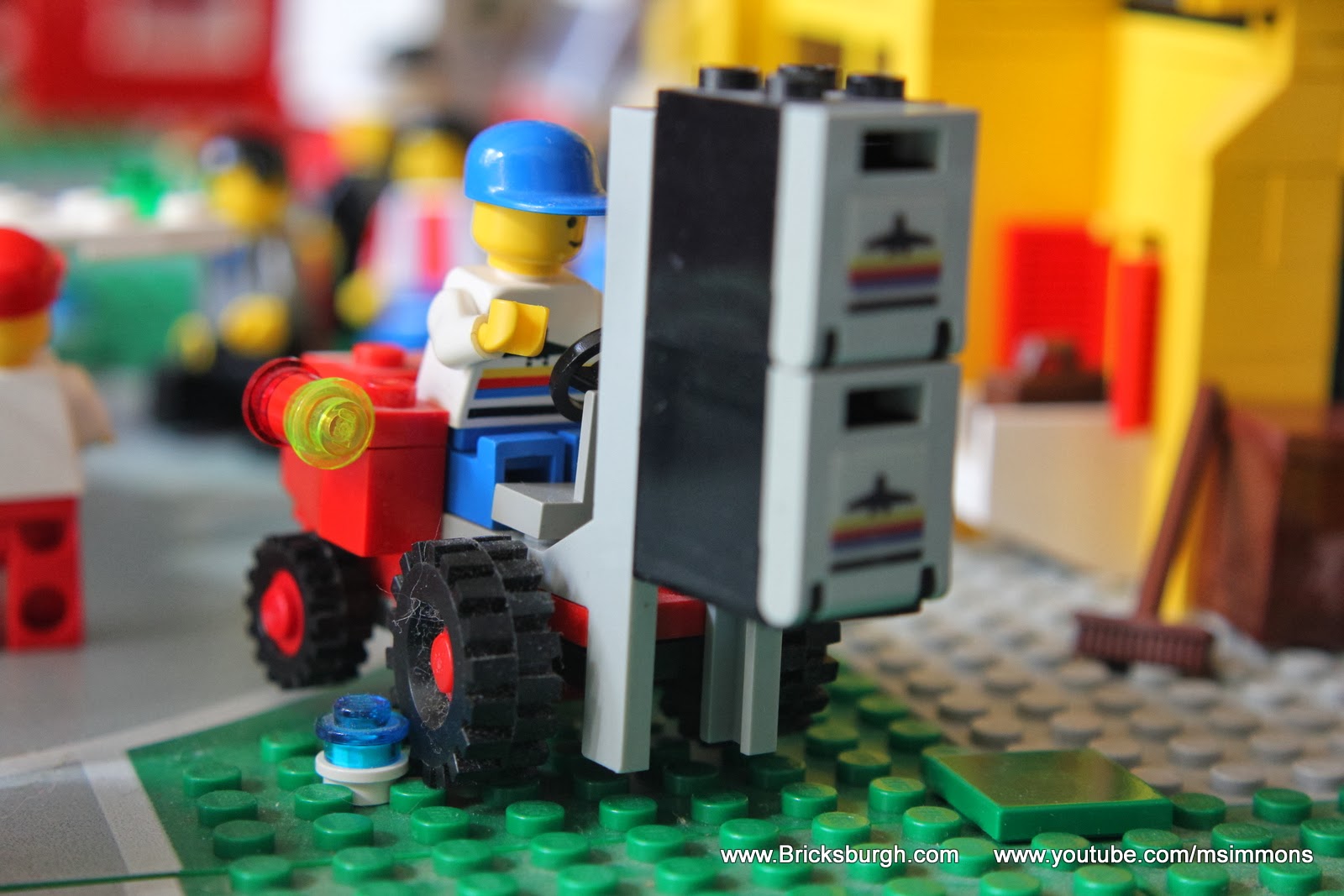 Speaking of cargo, while our next post will focus on the air cargo operations of the airport we can't completely ignore it here.  Most passenger aircraft will also carry whatever cargo is available to fill up their holds.  In this case, these shipping containers have already been removed from the inbound cargo of our jet and are being moved to the air cargo warehouse for the next step in their delivery. 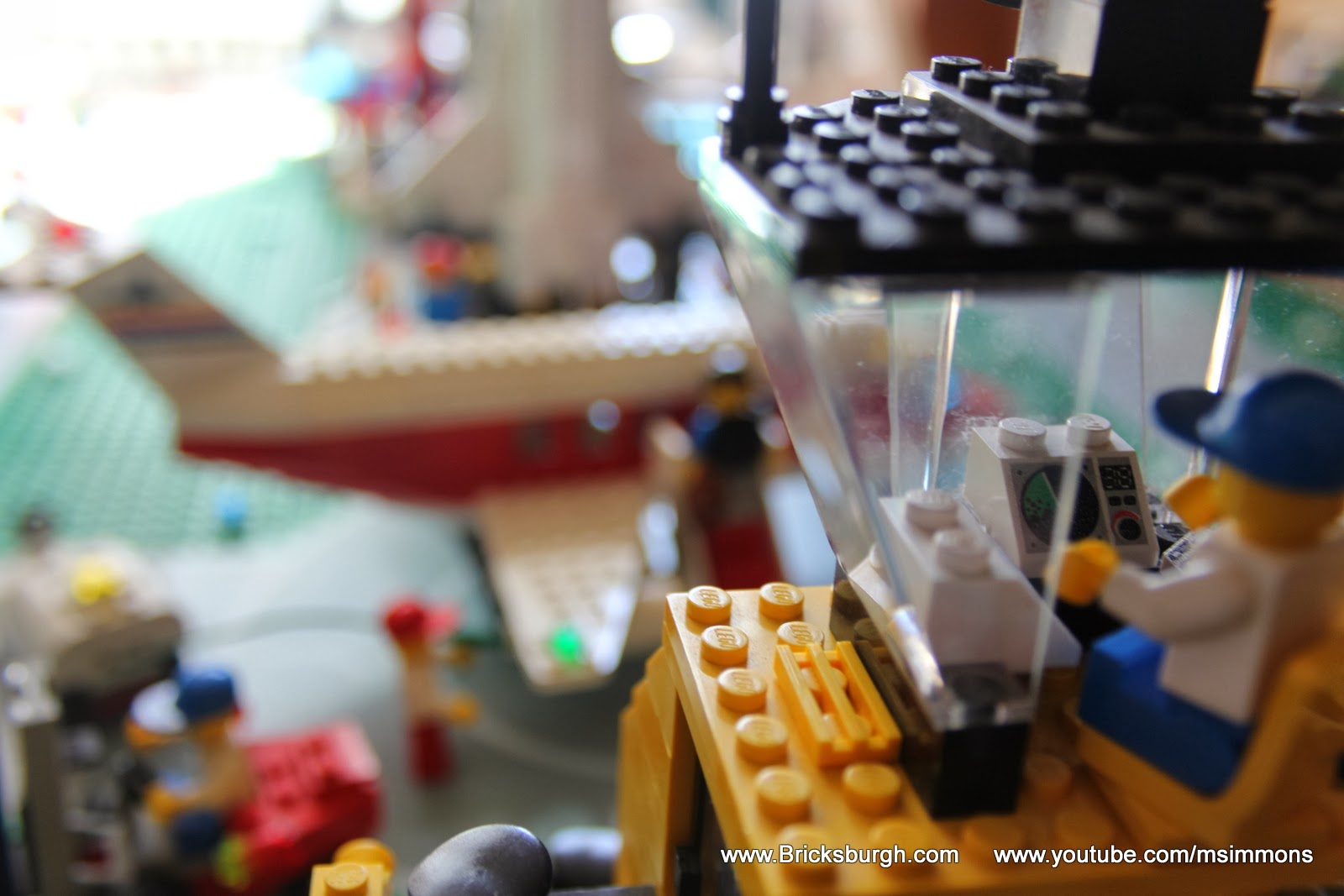 Up in the control tower, the air traffic controller at Bricksburgh's airport doubles as a ground controller.  He has two main runways to use (on either side of the space facilities) and several ramps near the terminal for passenger or cargo aircraft parking.  Our jet can be seen on the main ramp below. 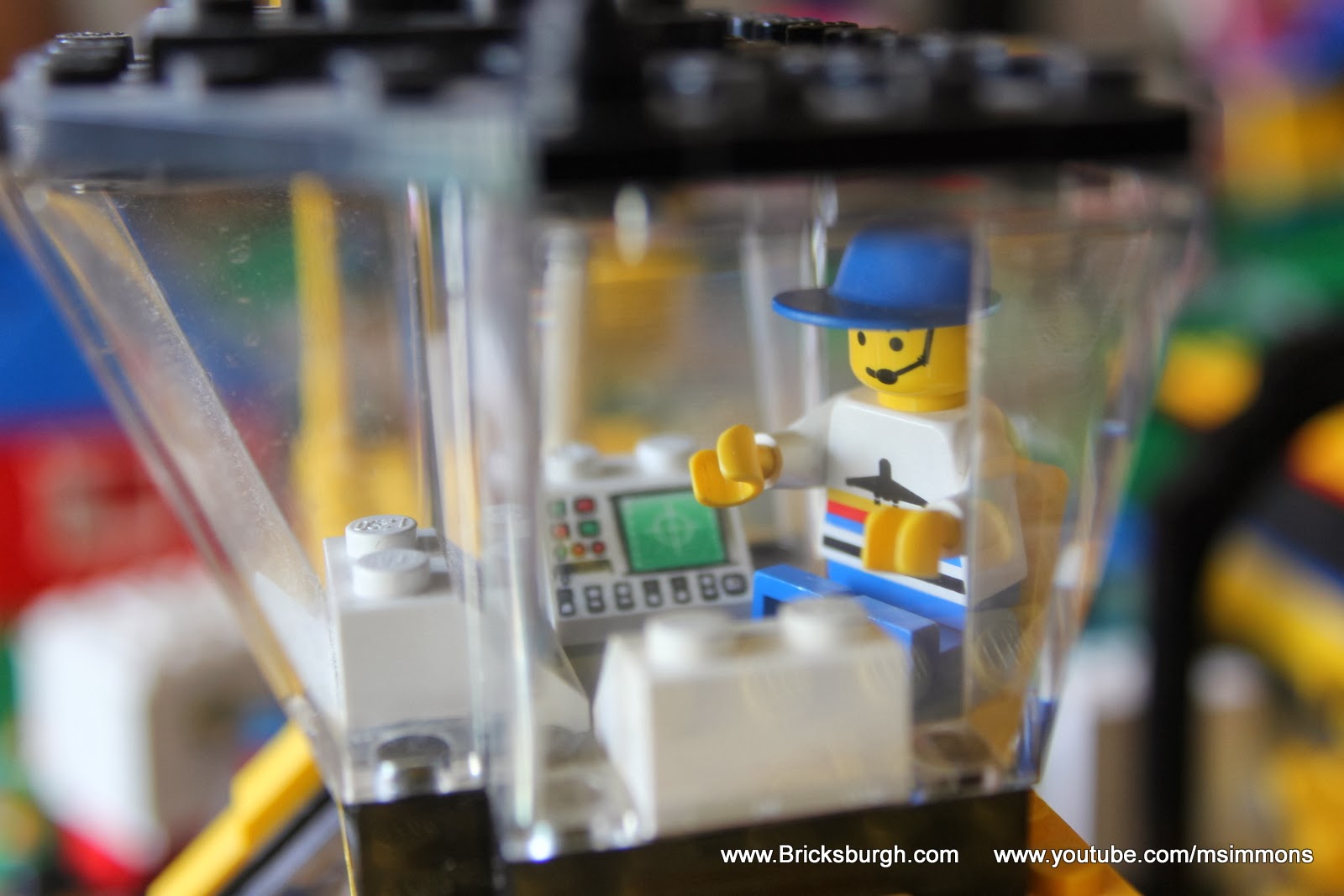 Here's a better look at our controller.  Like the check-in desk in the terminal, the controller position is a shared assignment among the airlines servicing Bricksburgh. 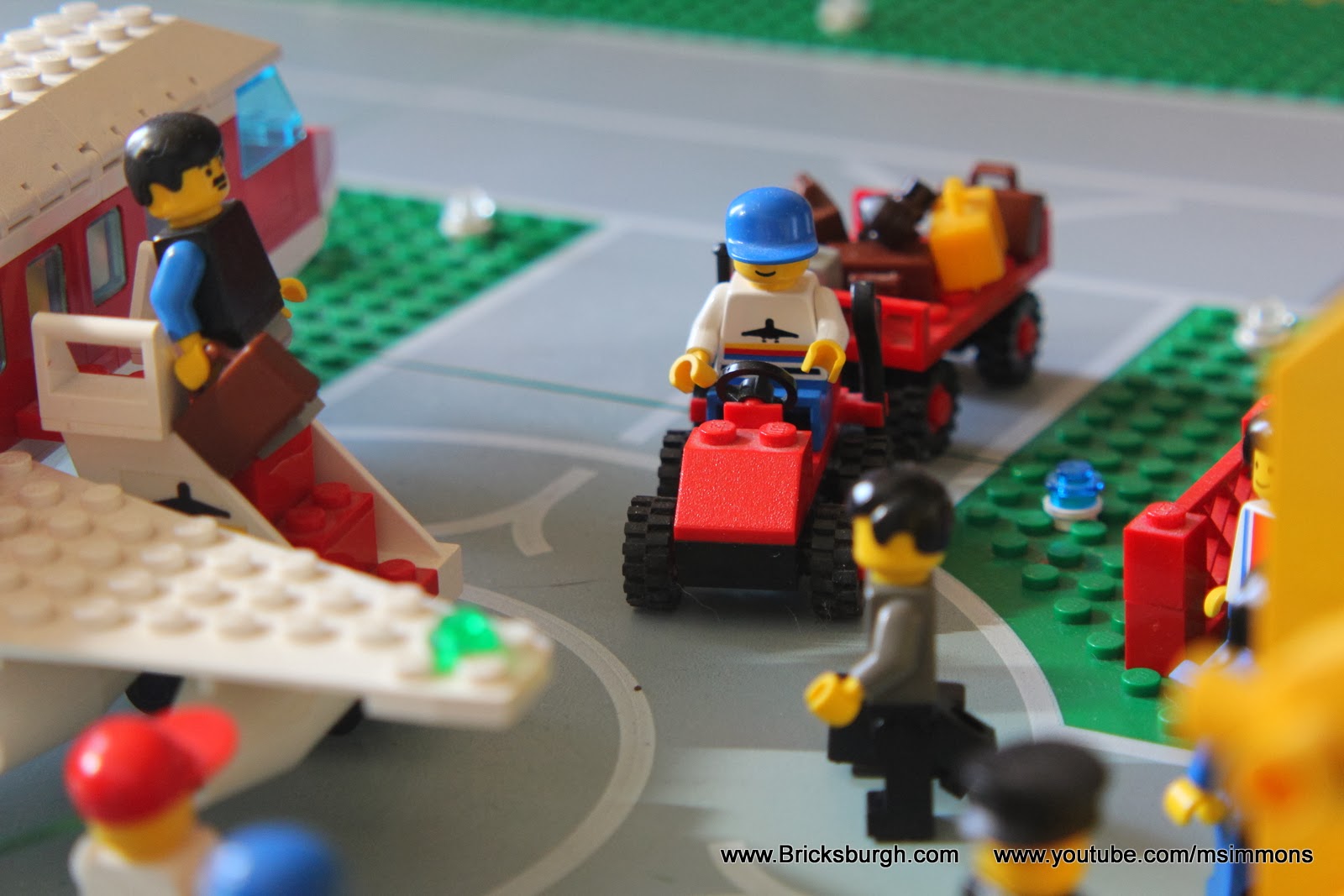 Passengers arriving at Bricksburgh are leaving the jet as the baggage cart makes it way to start loading up all the departing passengers' luggage. 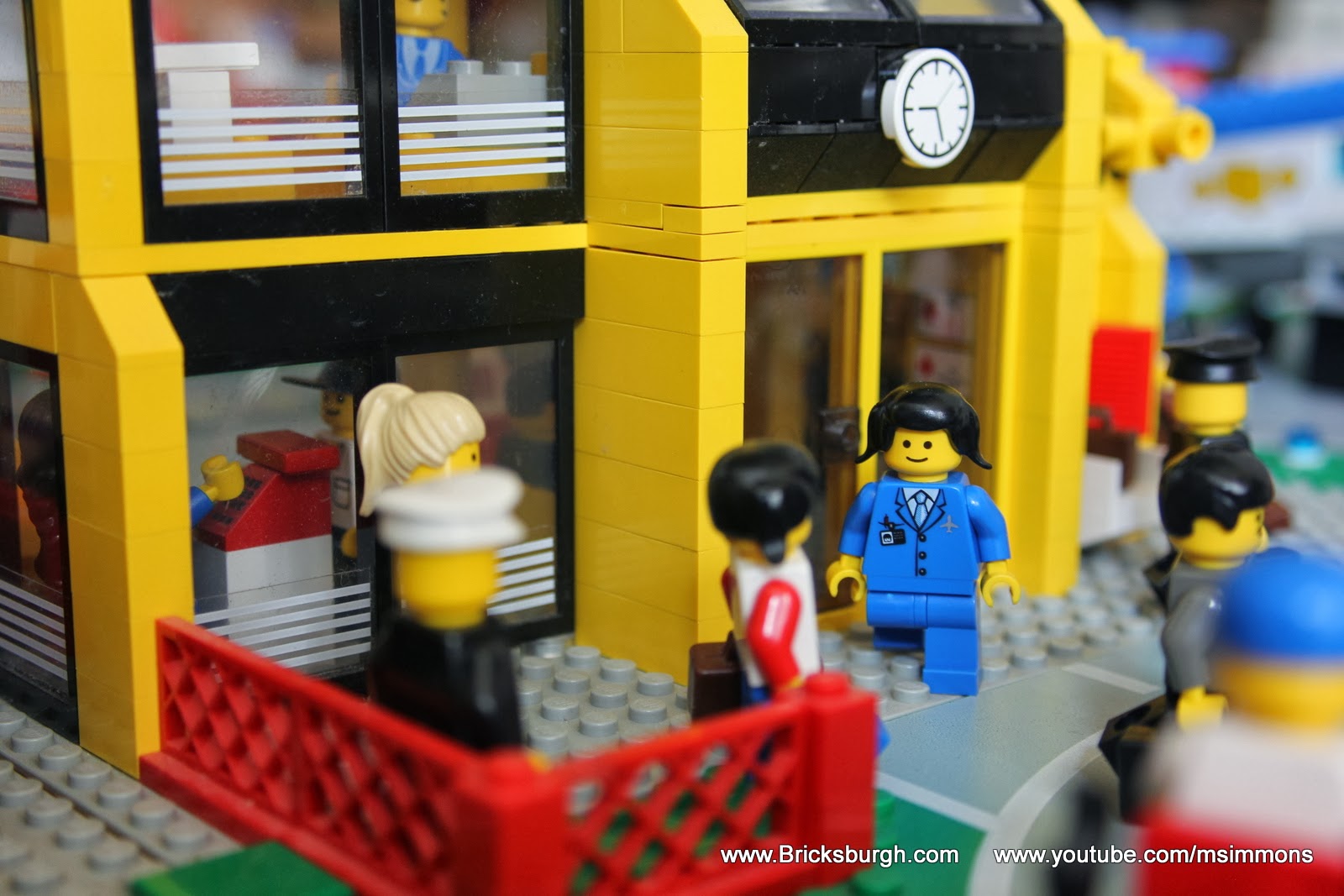 The main terminal building is showing its age a bit in this picture, you can see the facade needs some repairs! 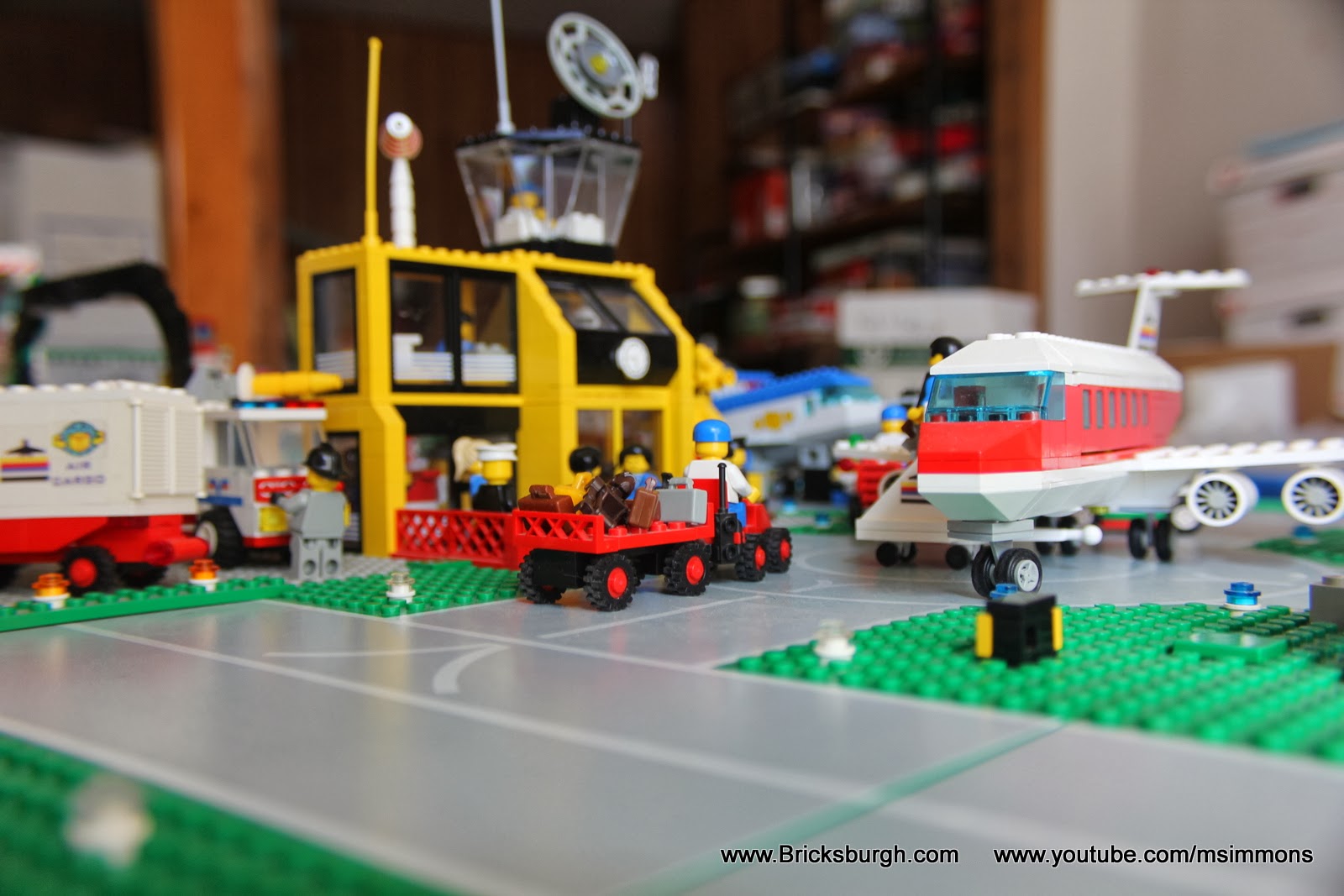 A little wider view shows the runway lights and markings approaching the terminal from runway 1-Right.  The additions to the terminal are most obvious from this side as well. 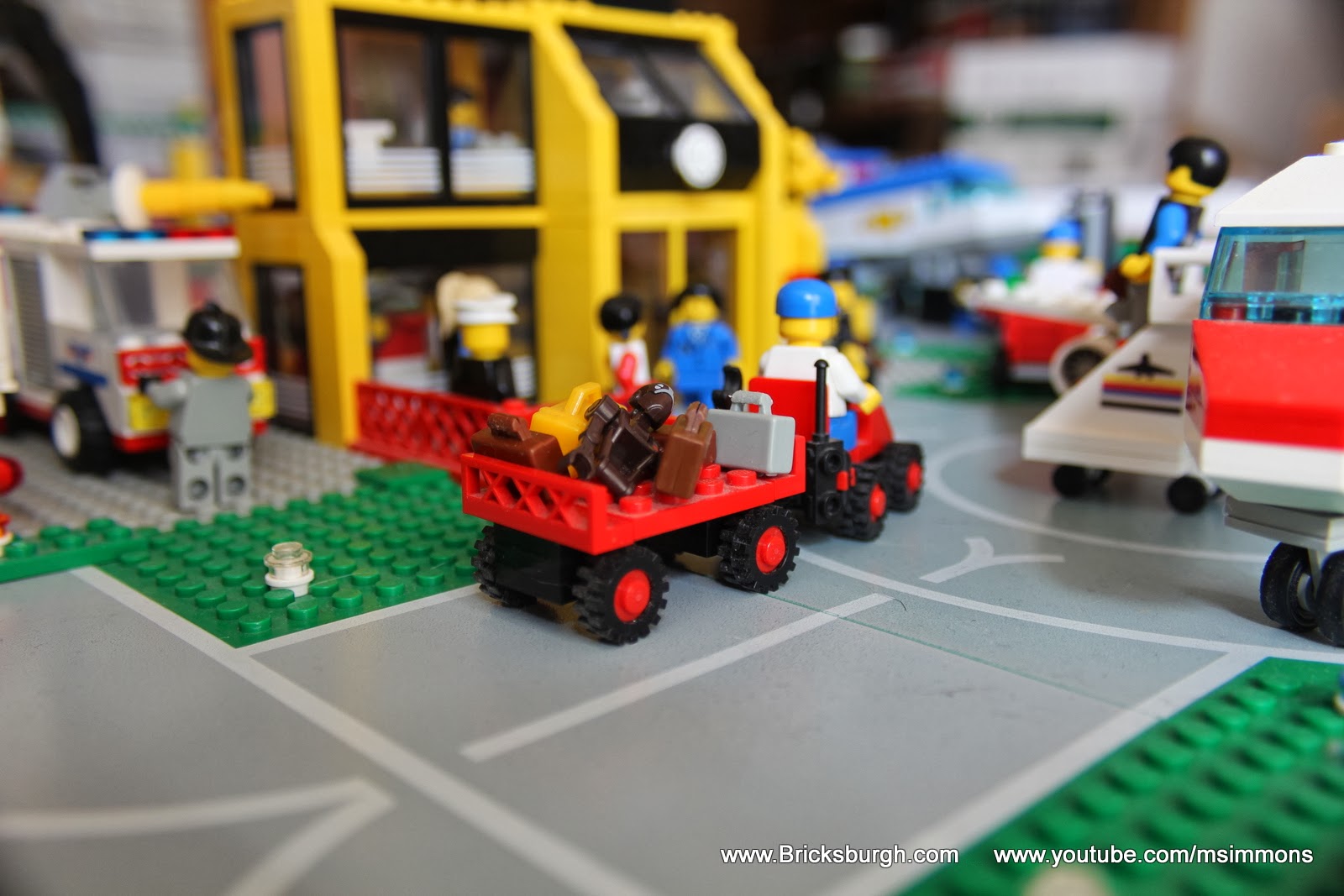 Unlike real airports, baggage carts at Bricksburgh are open-topped.  This is because we don't get rain. 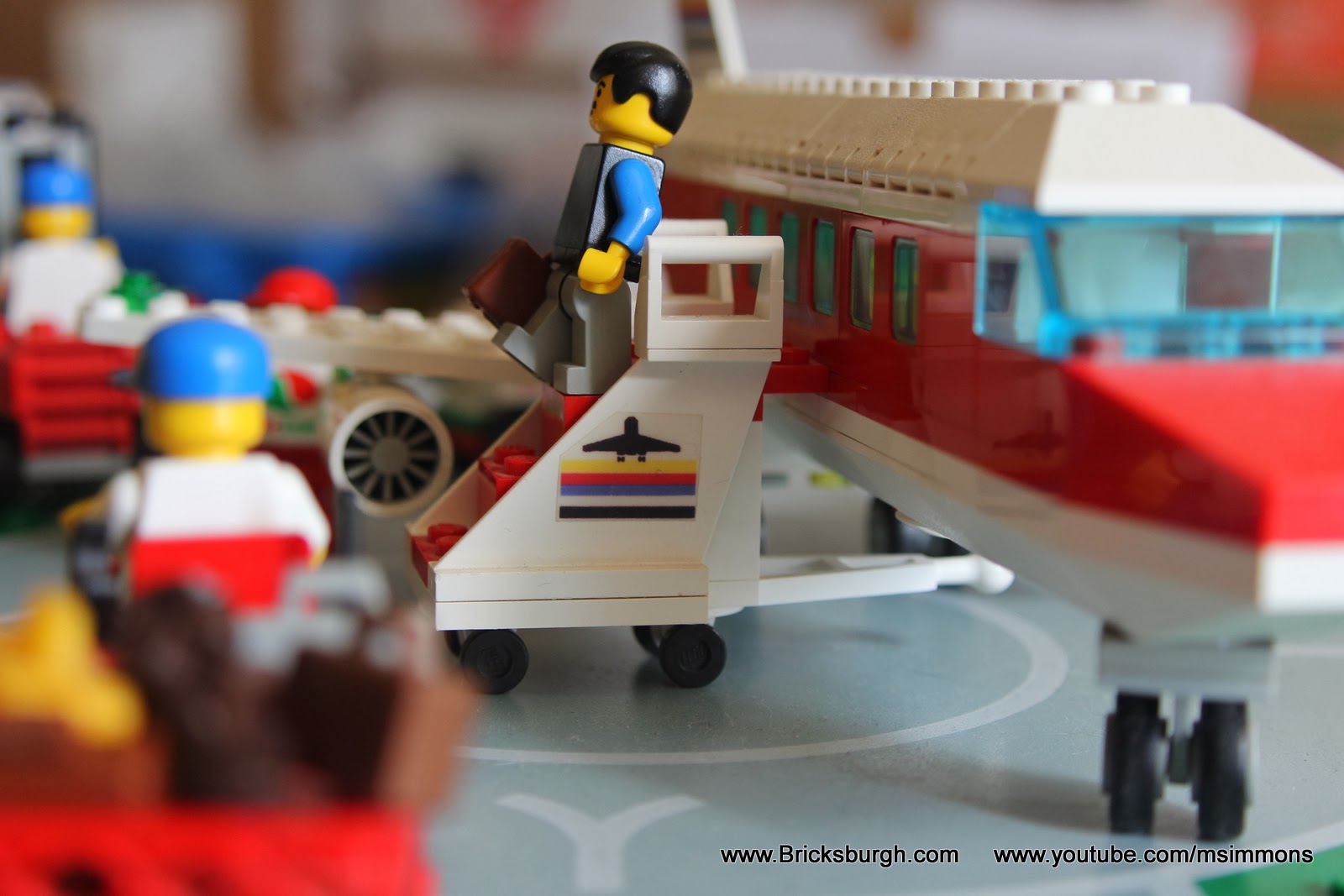 The stairway trailer is a nice addition to any "classic style" Lego airport.  The stickers were custom made from originals and printed on special adhesive paper.  We used them a number of places (like the shipping containers you saw earlier) but they really finished off the stairway trailer best. 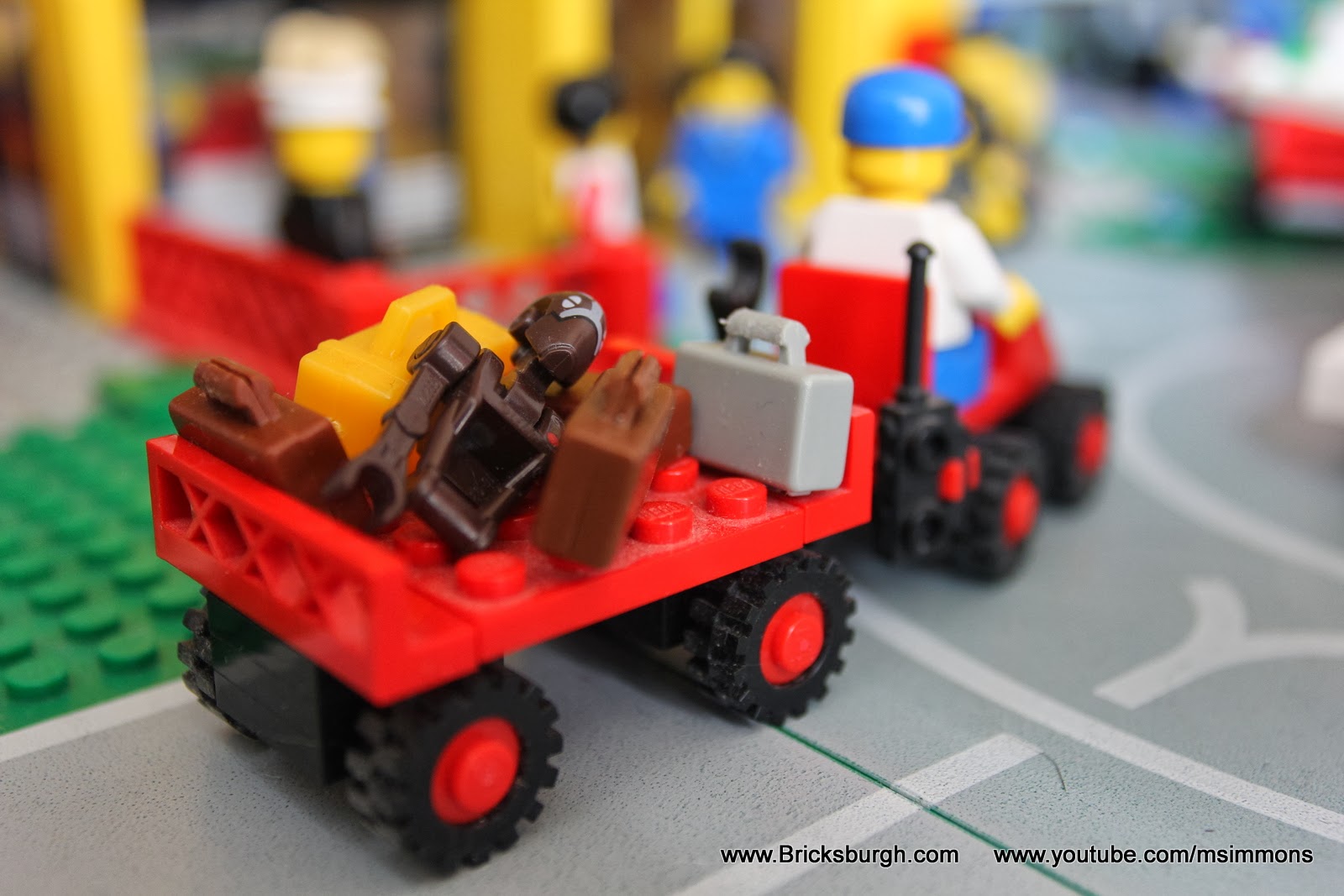 Wait a minute... I thought there was something strange on that baggage cart.  I was right!  Looks like the TechMan might be shipping out a defective android. 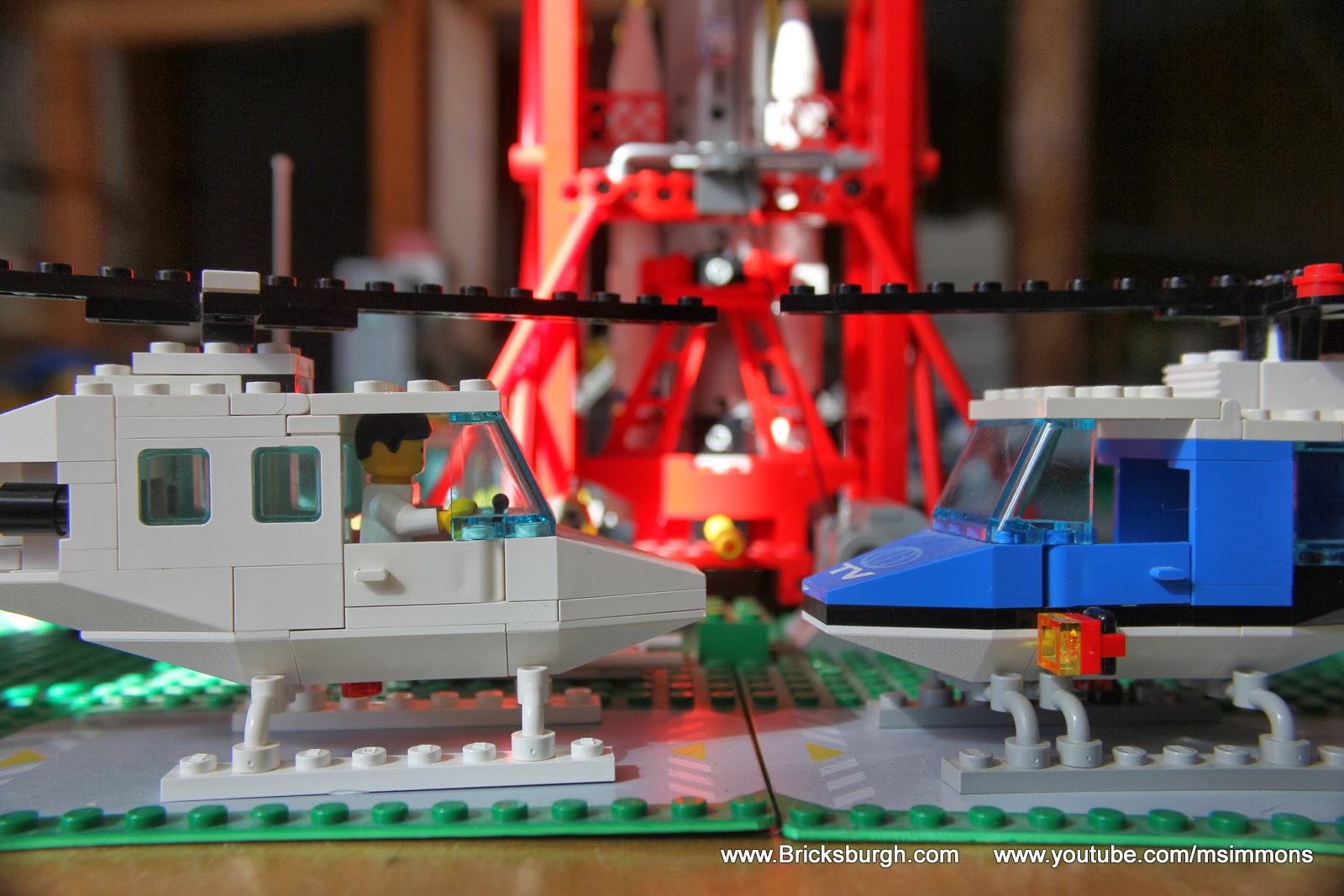 Just to wrap up our tour of the airport, here are a few other notable places in the complex.  Helicopter pads are located at the far end of the complex, near the space center.  Of course they can land anywhere on the runways and ramps too-- as long as they get clearance from the controller.  The police helicopter, for instance, will often land near arriving flights that have VIPs on them so they can get to the mayor's office without waiting in traffic. 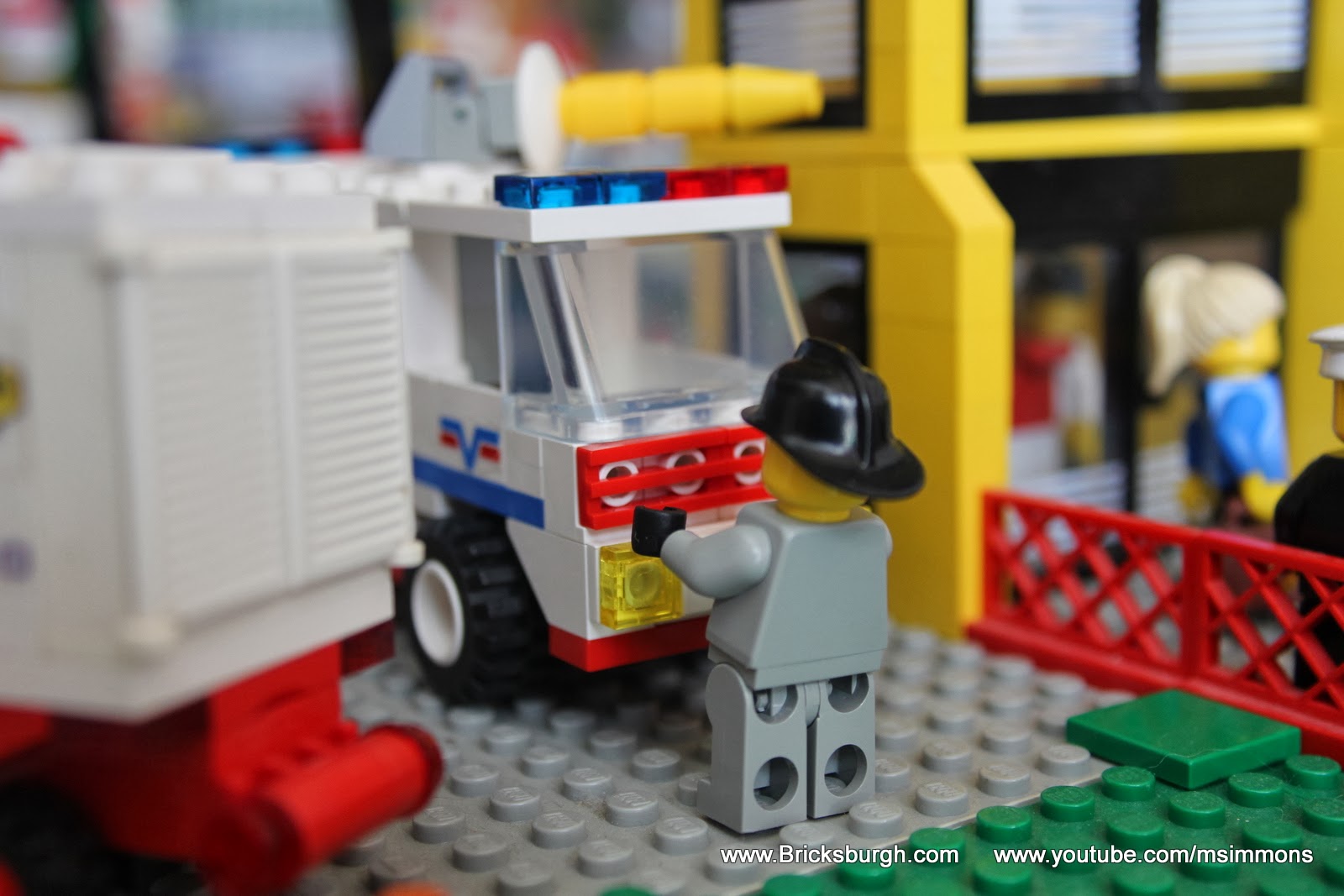 The airport has it's own specialty fire crew and truck.  The truck is equipped with foam sprayers and other gear that is specific to aircraft rescue.  In the event of a major incident, the Brickburgh Fire Department can get here quickly-- but this truck is the first line of defense. 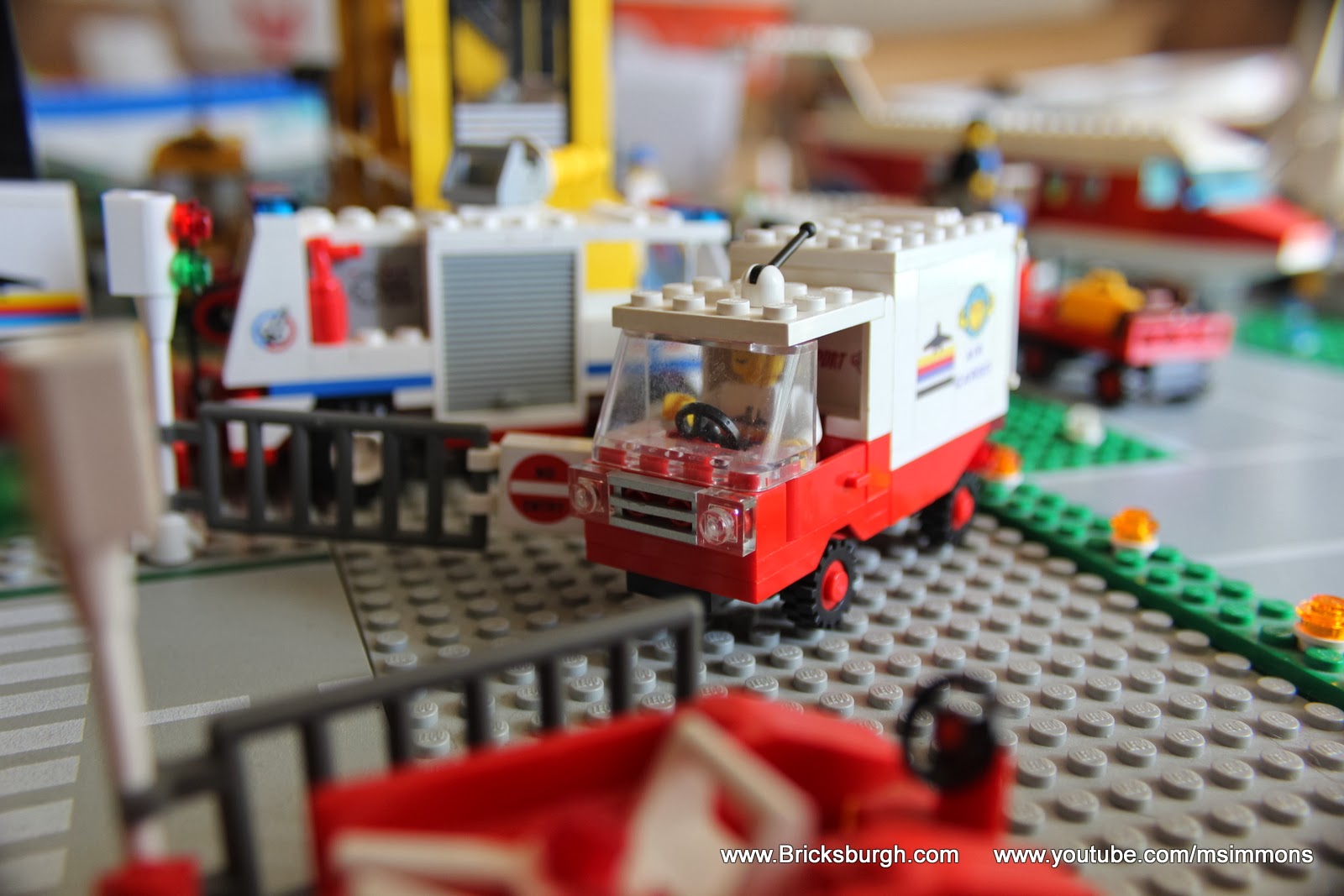 You can't really tell from this picture, but this is what's known as a "high lift" truck.  The rear "box" portion of it is on a large scissor hinge that can raise it up to the level of a cargo jet so that goods can be loaded and unloaded without using a forklift.  The truck is also used to make deliveries around Bricksburgh and, for a fee, they'll even come and pick up your outgoing cargo. 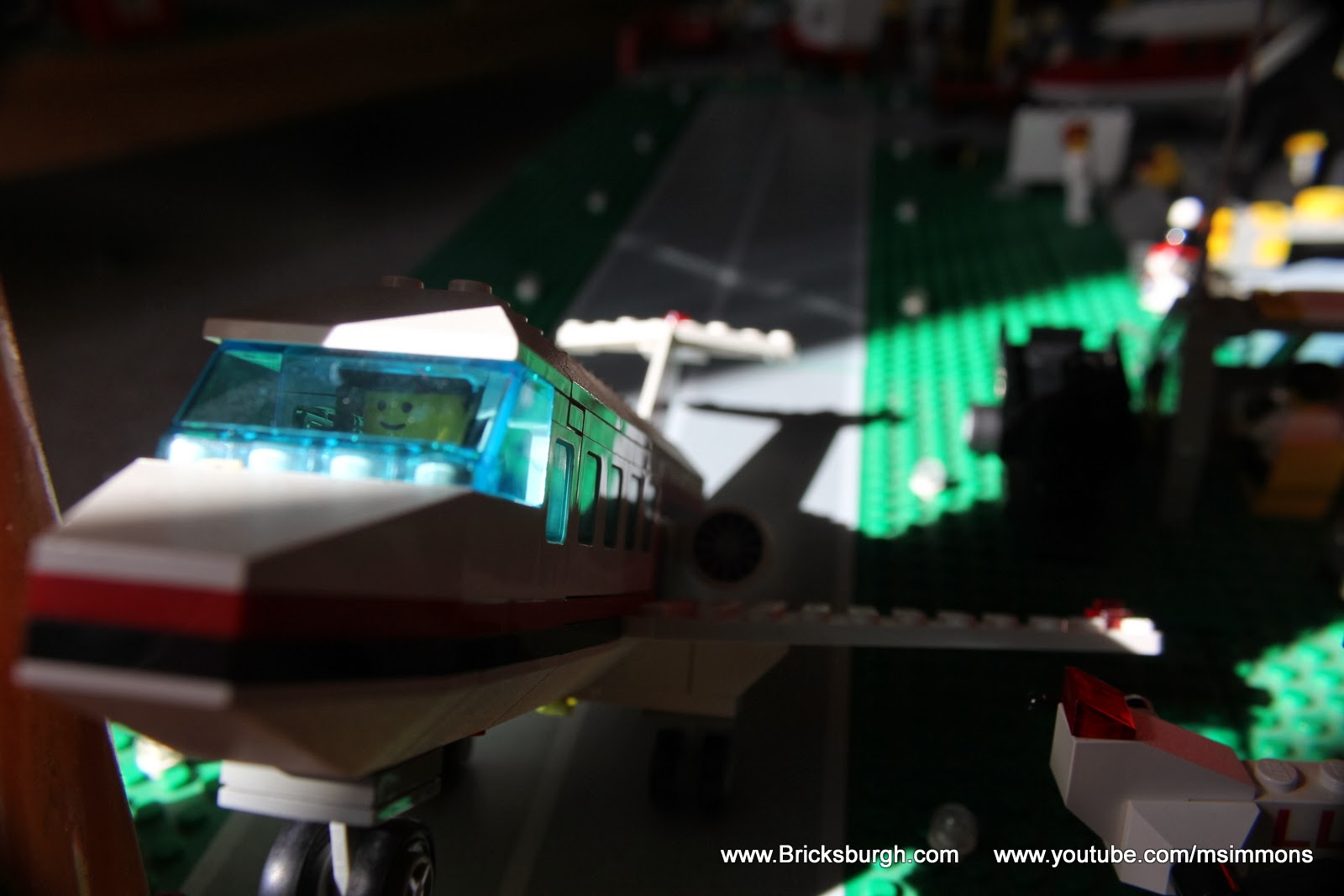 That does it for our picture tour of the airport's passenger capabilities.  As a happy minifig pilot begins his takeoff from Bricksburgh to parts unknown, we'd like to remind you that our next post will look at the cargo facilities of our airport.  Or, as we'll always think of it, the first of our NEXT 100 posts.