We've been getting CRAZY Spring thunderstorms around here lately and it reminded me of the largest disaster in the history of Bricksburgh.  It all started innocently enough...  Dust was noticed gathering on the assembled rooftops of Lego town.  The black roofs in particular were getting nasty. 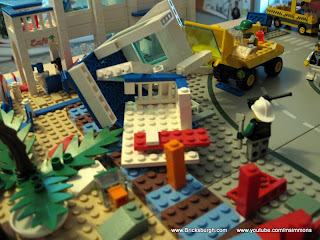 The prescription was given: aggressive cleaning.   We attacked the town with spray bottles and a filtered vacuum cleaner (an Electrolux, hence the name) and cleaned all of Bricksburgh.   The disaster caused by the cleaning process made for some interesting set ups and so...
We decided the buildings that had been knocked down or damaged would stay that way for a while and the damage was used test the emergency services and recovery efforts Bricksburgh could muster.  You can see a short video of the destruction here:
Some of the pictures in that video are shown below too.  It just made sense that if we were going to have to rebuild the town anyway, why not have some fun with it?! 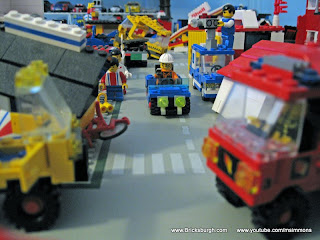 A rescue worker makes his way through a shattered street under the watchful lens of a news photographer. 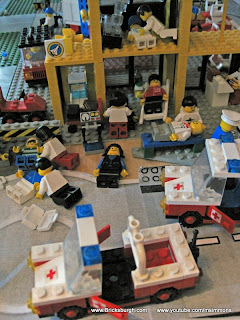 Many people were hurt in the storm and devastation.  Since the hospital was severely damaged, the next largest building in town (the airport terminal) is turned into a makeshift trauma center.  Here you can see the injured arriving and being treated-- some out in the parking lot! 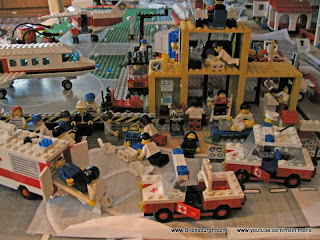 As fire crews and rescuers find more people buried in the rubble, the ambulances bring them to the airport. 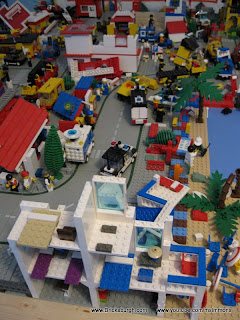 Looking down the beachfront street you can see the hotel ripped apart and the damaged hospital beyond it. 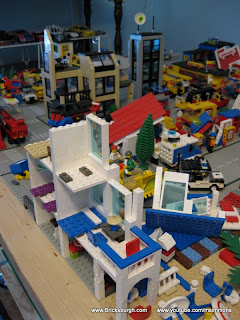 From three stories tall to just one in some places.  Fortunately the hotel guests had evacuated before the storm hit. 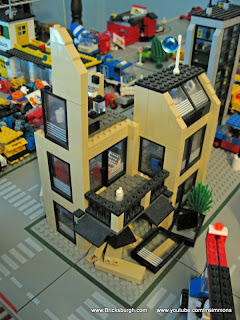 The tallest building in town (at that time), the TV station took a direct hit from the storm.  The entire top story was tossed into the street below.  With the antenna down, news reports had to be sent by satellite. 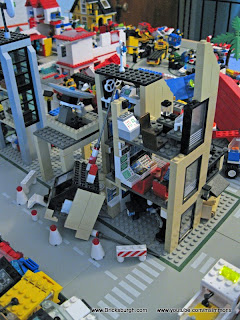 Here you can see where the top story of the TV station landed.  Strangely enough, even the papers on the desk in the General Manager's office were undisturbed despite falling four stories! 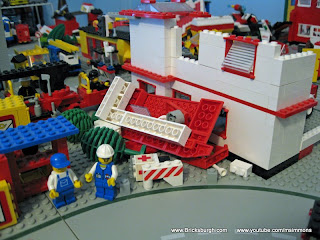 Two rescue workers take a break outside the hospital.  The main part of the hospital's roof was ripped off and into the walking plaza below. 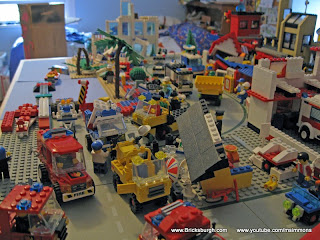 The snack bar was destroyed as well.  You can see a tow truck loading up a wrecked truck. 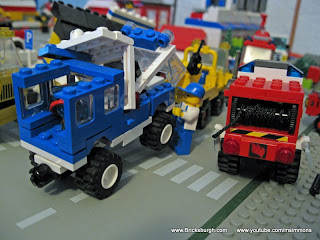 The remains of an SUV are hooked up to tow truck to be moved out of the way.  Clearing the streets was one of the first priorities, so that rescue crews could find survivors quickly. 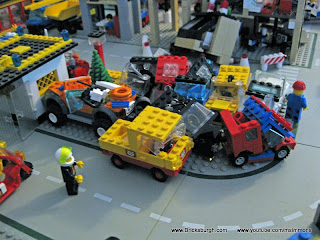 Many, many cars and trucks were demolished in the storm.  Some were tossed and some had things tossed on top of them.  Tow truck crews were very busy bringing all the wrecked cars to a quickly set up impound lot in front of the police station. 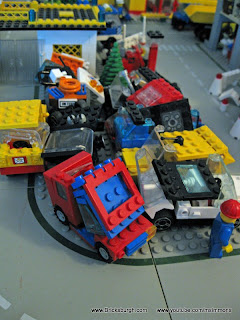 Very few-- if any-- of these cars will be rebuilt, so great is their destruction.  But at least their owners will be able to get personal items out of them before they go to the junkyard. 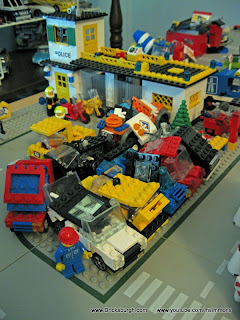 There are so many damaged vehicles that they actually FILL this entire city block! 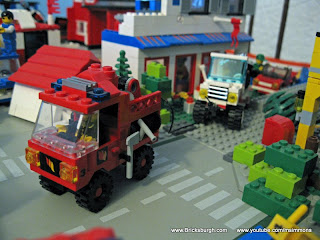 Another damaged truck is pulled out from inside a building, where the storm threw it.  Even with the tow trucks working hard this fire crew still has to help get the crashed truck out to street where it can be hauled off to the impound lot. 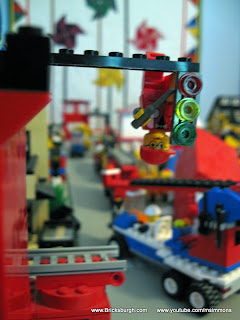 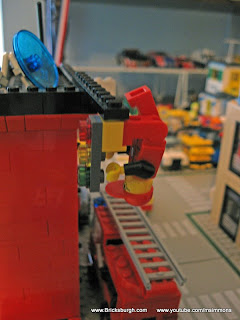 The TechMan finds himself working on a traffic light, trying to help bring some order back to the streets below.  I'm not sure his technique is the safest!

There was another disaster-- very similar that happened in Bricksburgh about a year after Hurricane Electrolux.  You can see video of that disaster and its emergency response here: