In real estate they always say that the most important thing is "location, location, location".  And here we have a prime location ready to build on.   It is right across the street from the police station and on a two busy street corners! 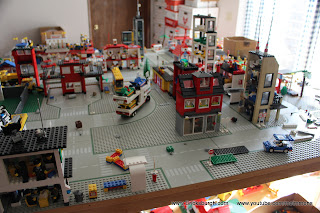 So what business will get built next to the pizza shop?  Read on, as we rebuild Bricksburgh!
The winner is:  The Repair Shop.   We actually have two of these classic sets, which are better known as Auto Repair Shop Set# 6363.  It was off in a corner in the old town but now we're moving it to a more prominent location and, as a result, it needs to look more polished than the rundown building it was before. 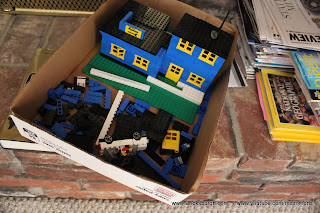 Here it is, sitting in its "project box" where I've been tinkering with it.  This is NOT the final design, but it is probably pretty close to the overall dimensions and footprint the garage will get.  Finishing it off will require the addition of a lot more details to the front of the building to give it some architectural character. 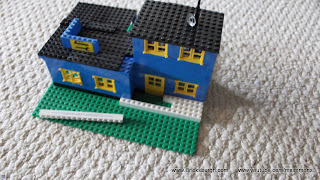 The general size of the building will likely stay the same too, though I'd like to make it another story taller in the final version.  I've marked off the buildable area using those white bricks.  It will nest right up against the side of the pizza shop.  Since the pizza shop is such a good looking building, this one will require quite a few upgrades to fit in next to it-- at a minimum, it'll get a cornice of some kind. 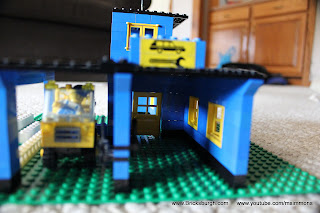 These garage bays are much deeper than the original set.  The right bay, in particular, is about 4-5 studs deeper.   The ceiling height in these bays will allow the tow trucks to park inside when not in use and the flatbed can fit in the right bay. 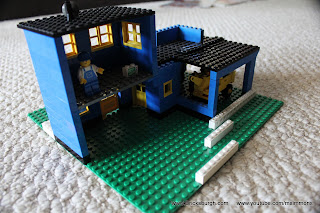 Here again, you can see the white bricks marking the borders of the building site (if you look back at the headline picture, you'll see that the backside of the shop will be on a curved road plate).  The ceiling height on the second floor is also quite high.   I don't have enough yellow windows to make it up to a third level... but I'm considering some other options that might make that possible anyway.  One idea is to take the windows from the garage bay and use different ones there.  I really want to make it taller than this. 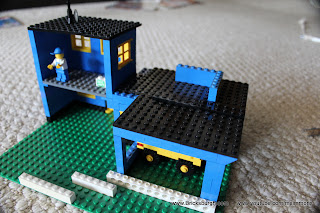 You'll note the interior floor is a different color than the outside bricks and the garage roof pieces.  That is intentional.  I am increasingly interested in keeping the outside colors consistent and not making the floor divisions obvious-- and yet, also not using the same color as the roof pieces.  It's a refinement that Lego sets didn't develop until much later than most of our collection.  The open repair bay will also be right on the curb line of the street so some kind of protective guard rail will be needed there. 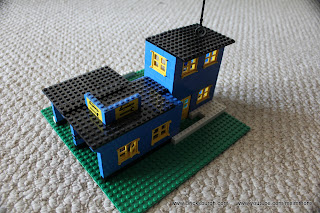 One last look of the "rough draft" of the new repair shop.  Check back-- I'll post a new entry once the structure is finished.  It'll have a lot more detailing and will probably be taller as getting a 3rd story is a high design priority.  I just thought you'd like to see how simple the buildings start out.

UPDATE:  Repair Shop is finished!  Read more, click HERE.
Also, you can see the improved Repair Shop in this video:  http://youtu.be/zk0-HiyLUoY
Thanks for visiting us here at www.bricksburgh.com and check out the videos on our YouTube channel at www.YouTube.com/MSIMMONS.
at 9:00 AM