As we wrote about a few weeks ago in "Repairing the Repair Shop", we've been rebuilding and redesigning some parts of town as it gets set back up.  We've since finished the reconstruction of the Repair Shop-- and here it is! 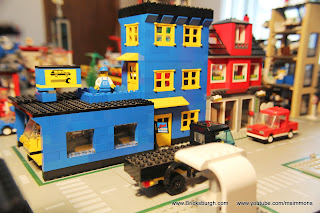 It's now taller than ever!  Why?  Read on.
The first thing you would notice when comparing it to the earlier post is that it has gained an additional floor.   Remember, the original set was a single story building, then we "drafted" a 2 story version in our earlier post, and ended up with a 3 story building. 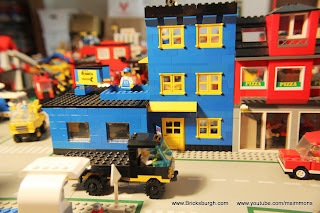 The limiting factor in the earlier version of the new repair shop were the windows.  The shop was made of two sets of  the Auto Repair Shop set# 6363, so we only had 6 windows that matched (3 from each set).  Once we changed the garage's windows to clear panels, that freed up the other windows to be used on making a new top floor.  The panel windows for the garage are consistent with our desire to keep the "history" of the buildings realistic-- in this case, the garage would have been an addition made on a vacant lot next to the original "historic" main building. 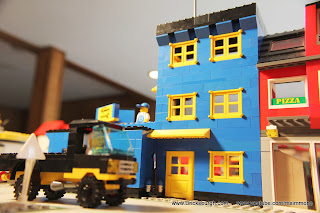 Yellow roof pieces were added to the facade on the front to make a covered awning entryway.  We also bulked up the cornice to give the roof line more presence (we're planning to update the Condo Building in a similar way).  The awning will eventually get some advertising or signage printed onto it. 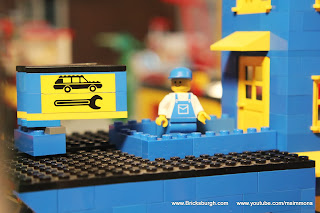 Due to its location on a wraparound corner, the shop's sign needed to be built so it could be seen from all the surrounding streets.  We took the two original signs and mounted them in a "V" pattern.  The second floor area also extended out onto the garage roof to make for a nice terrace.  These guys just need some furniture and plants! 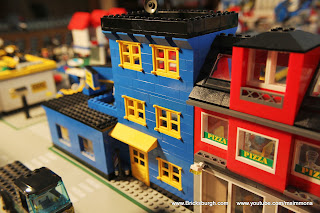 Bumping the building up to 3 stories also makes for a better "streetscape" as it now rises to match the Pizza Shop.  Again, I think you can imagine that a third building originally stood on the corner before being demolished and replaced with the garage area. 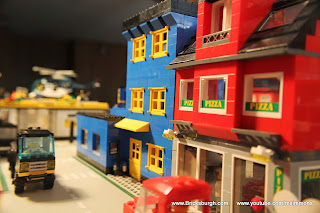 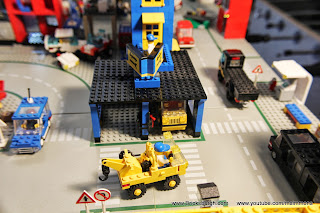 The garage has two bays with the one of the right being several studs deeper to accommodate the flatbed truck.  Here you can see the rooftop sign's "V" shape much better. 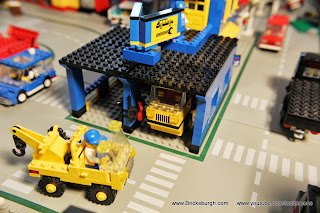 The walls are built right up to the street edge, which gives the area around it a more industrial feel-- which is appropriate as we're several blocks away from the beach and retails areas.  The police station is located right across the street. 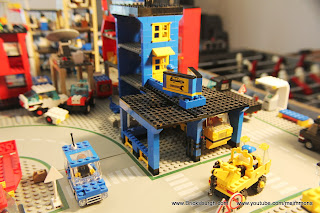 The backside of the garage is protected by just a heavy railing so that you can still reach into the garage itself but also protect the workers inside from the traffic beyond.  The repair shop's property extends to include most of the space behind the pizza shop and will give them room to store/park cars that are awaiting repair.

You can also see the new repair shop in our May 2013 video update:

Thanks for visiting us here at www.bricksburgh.com and check out the videos on our YouTube channel at www.YouTube.com/MSIMMONS.
at 12:12 PM