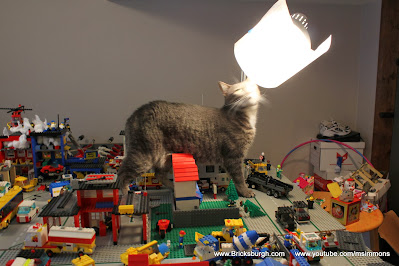 Our cat Sophie was always intent on being AS CLOSE AS POSSIBLE to whatever we were working on, and that included the Legotown. Sophie has been gone several years now (sadly) but I thought you'd enjoy these pictures of her roaming around scaring minifigs.
First of all, if you haven't seen the first post, here it is: CATZILLA ATTACKS!
You'll note that the background room has changed from the first Catzilla post to this one. That partly explains the delay-- we moved! The town was also on new tables in this post, with the original (somewhat shaky!) Lego table dismantled. 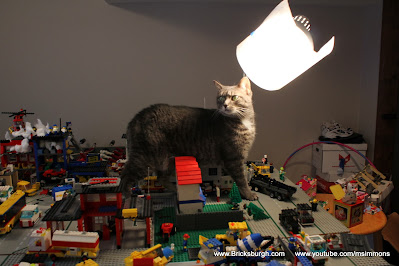 But let's get back to Sophie and her mayhem. If you look to the left of this picture, you'll see smoke rising from the repair shop. We were taking pictures of a big fire scene and Sophie just HAD to see what we were up to. That fire scene will be posted in the coming weeks-- finally!  It's really impressive and detailed so I hope you'll check back. 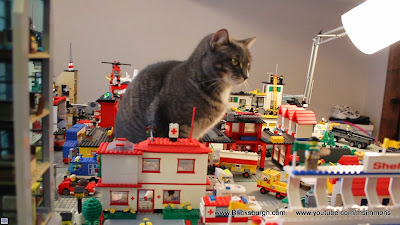 In the interest of not having our newly completed scene invaded by a giant fur ball, we tried to distract (attract?) Sophie over to a different part of town. Interestingly, and perhaps related to her developing condition (unknown to us) she was always a very quiet cat. She would purr loudly, but never really meowed. We thought that maybe she had never really learned to speak? 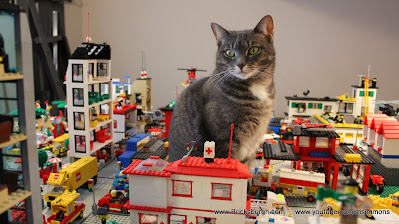 I should mention, if you didn't pick it up already, that Sophie has since died. She developed pulmonary fibrosis and her health declined pretty quickly. We mourned her deeply. 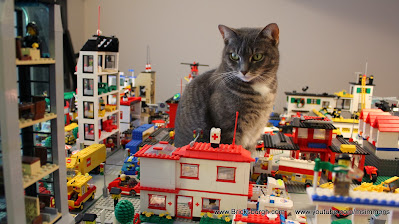 Sophie was always so fascinated by what we were doing-- a constant companion-- and so happy and content to snuggle into our laps and beds and sleep. She would come running anytime I whistled the tune "Cupid" -- which was really strange because other songs didn't appear to have the same effect! 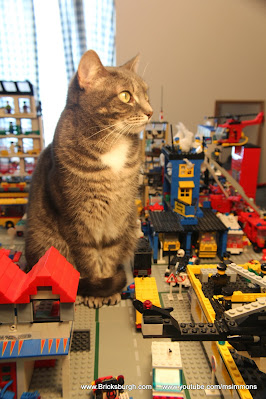 She was also so dainty-- a pretty small cat even when full grown, like here. And she was so dignified and ladylike, always curling her tail around her feet when she sat... very prim, proper and regal. I guess her quiet demeanor just added to the air of nobility she had about her. 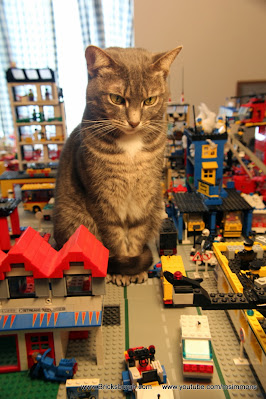 Perhaps most impressively, despite her small size, she could leap to heights that were unbelievable and land with grace and panache. She would regularly go from floor to the top of a 6 foot bookcase in a single stationary vertical jump.  Oh-- and here's a little teaser of the fire scene in the right background. 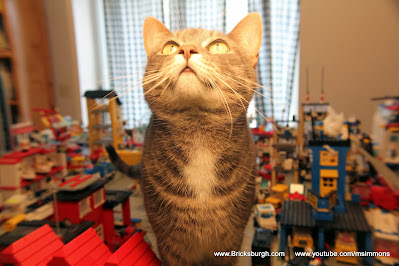 Eventually, Sophie's condition was so severe that she simply could not breathe on her own... her lungs were not working and we had no choice but to let her go. She purred and nuzzled even when in distress and quietly slipped away. We buried her in a quiet spot behind our house where she always looked out at the birds...  and I made a gravestone for her, using my Dremel in the stone. 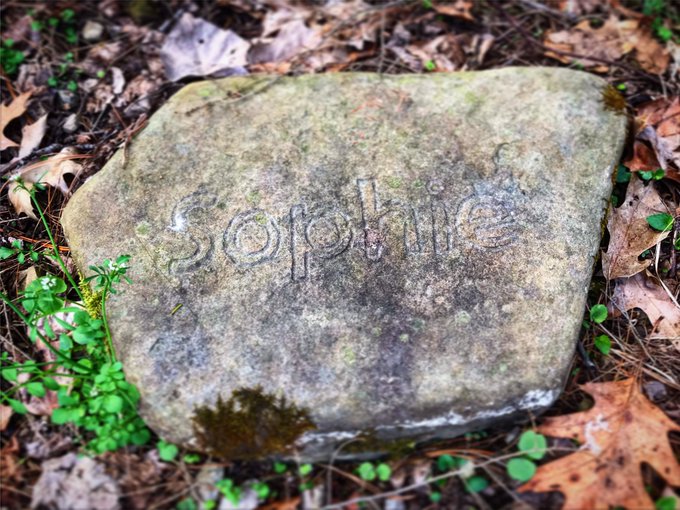 After a painful time without a cat, we were ready as a family to open our hearts again. Zoe came to us a goofy kitten and has grown to have a similar enthusiasm to being RIGHT HERE whenever you're working on something and happily napping in any lap that presents itself... but yet, she's very different from Sophie. 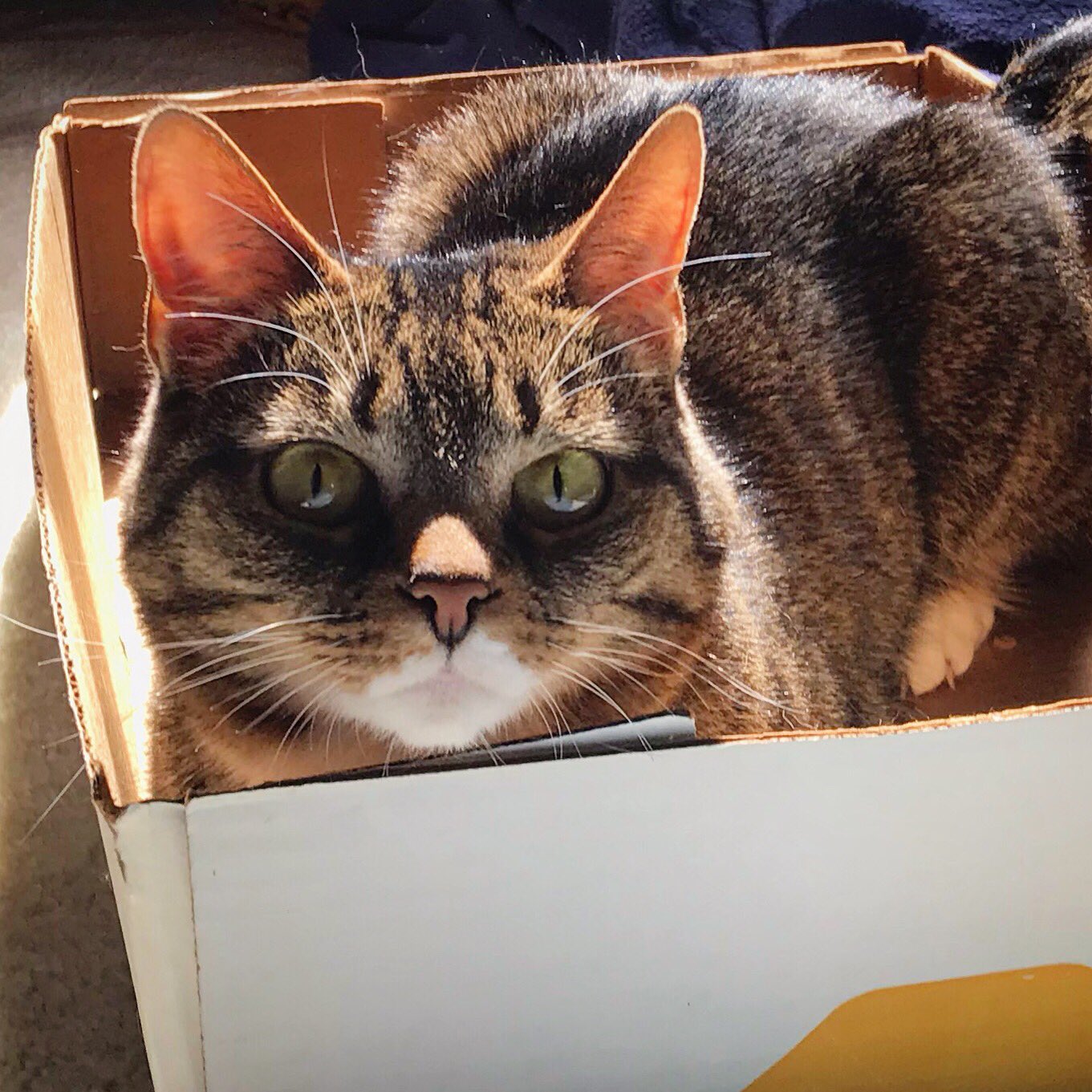 Zoe is QUITE goofy. She's not the delicate lady that Sophie was, with somewhat clumsy tumbles now and then and a need to MEOW loudly to announce SHE'S-A-COMING anytime she jumps up to her cat tree. Zoe's vertical leap is probably about a third of Sophie's and she's probably a third bigger (at least) with deeper fur. Zoe is also QUITE LOUD with an eagerness to berate us verbally when we're not being attentive and generally letting her thoughts be proclaimed under all situations.... but we love her so much.  Every house should have a cat. 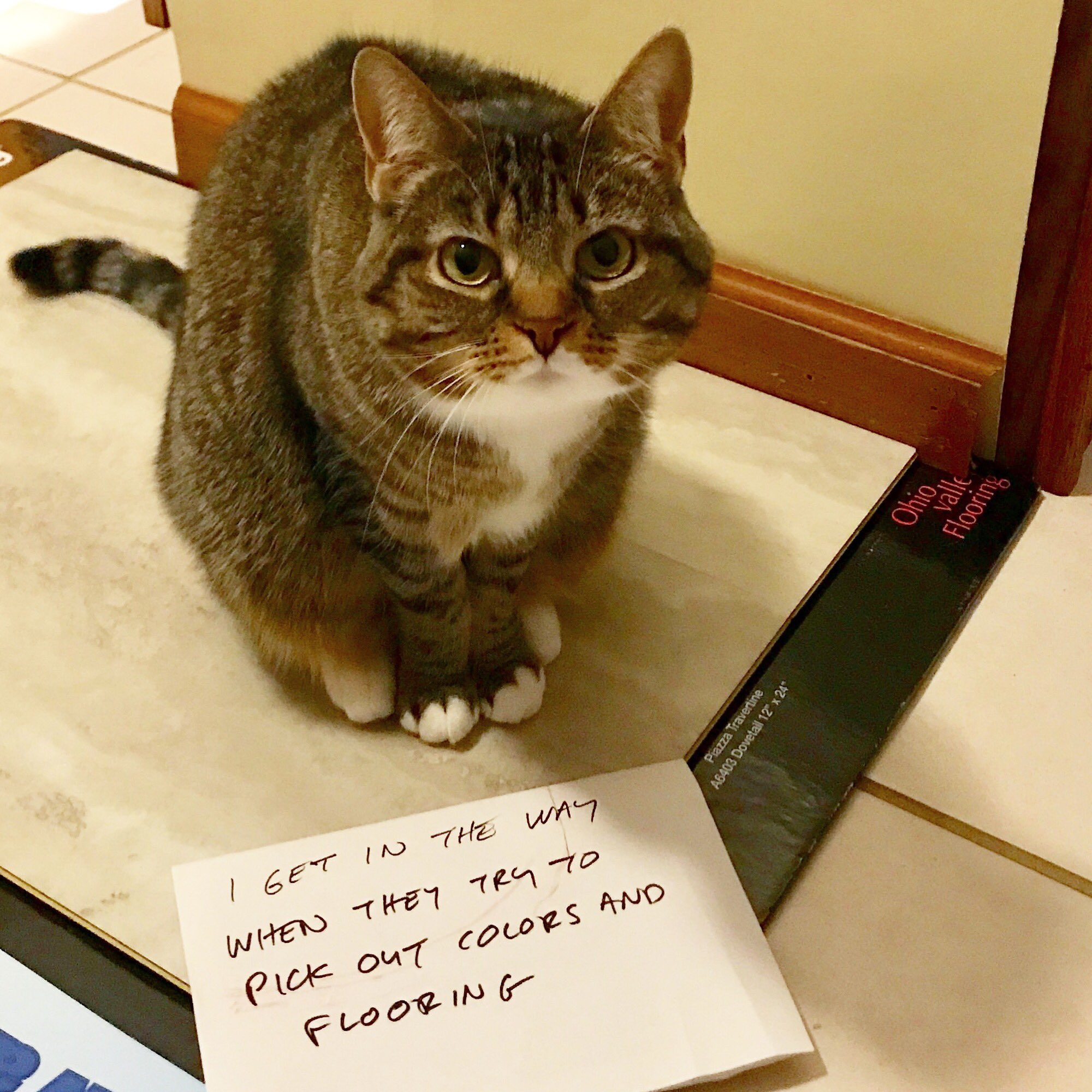 Anyway-- you came her for Lego... I know...    We don't have many pictures (if any?) of Zoe roaming the Legotown, mostly because I don't think she can jump up there without bowling through the buildings! So I might have to "place" her in town just to see what she does...  #SOON.
In the meantime, here's a video of Sophie playing Lego with us, it always makes me laugh!
Thanks for visiting us here at www.bricksburgh.com and check out the videos on our YouTube channel at www.YouTube.com/MSIMMONS.
at 8:08 AM