Preview of Our New Harbor

Greetings Bricksburghers!
After a long hiatus, the harbor complex is returning to Bricksburgh.  You'll recall that it one of the few remaining "unfinished" areas of the new town (the other being the neighborhood).  Truly no Lego city is ever FINISHED, but I think you know what we mean. 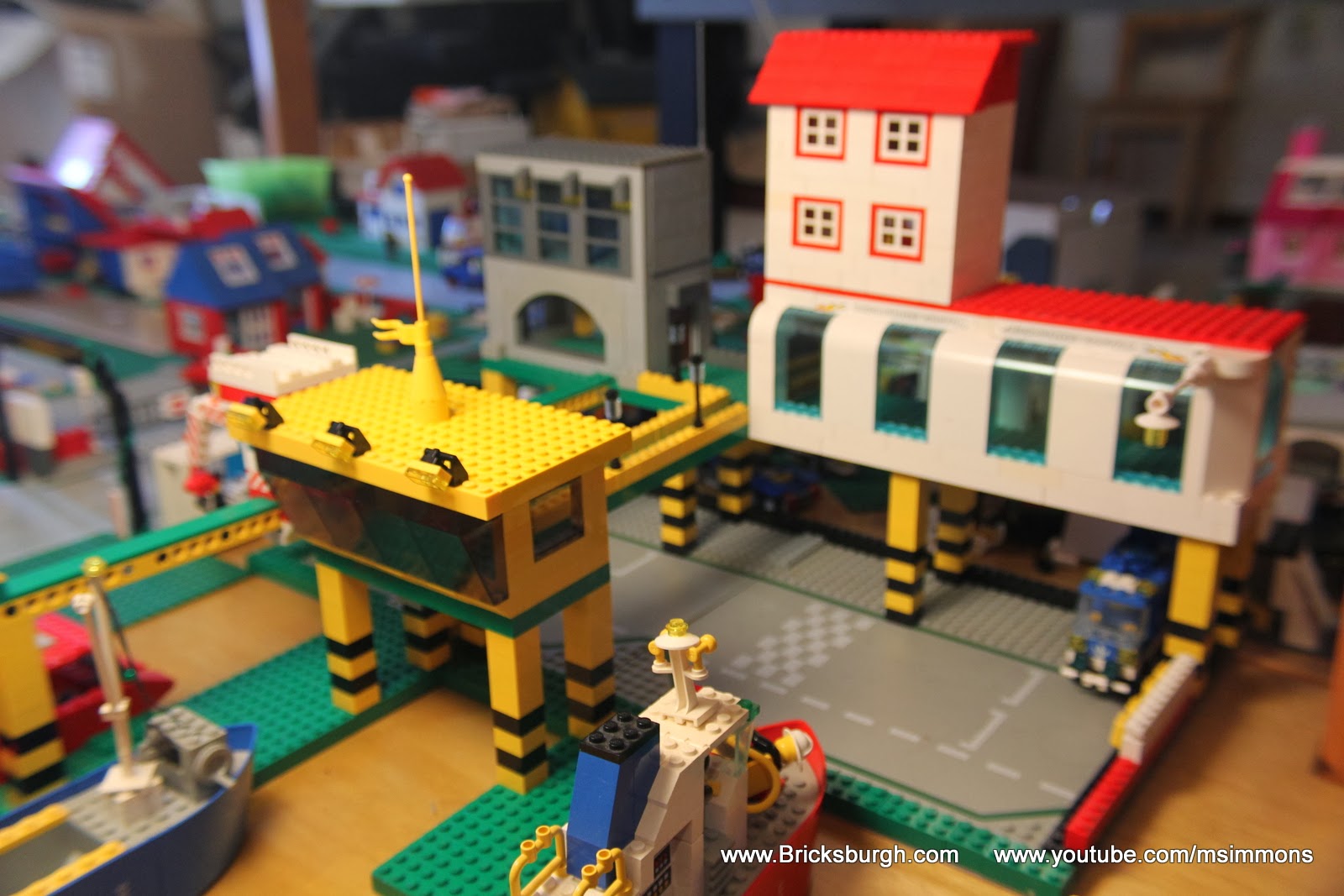 If you can ignore the "construction" we'll take a quick preview tour around the complex.


Before we get too involved in what's new, take a quick look back at our second harbor about 10 years ago, from which this new one was inspired.  That harbor was the first one to feature the elevated buildings (mainly to give us more space to move the big trucks around the docks) which also then appeared in the third harbor (which was separate from the main Lego table).   This version is the fourth generation harbor and everything is bigger and better! 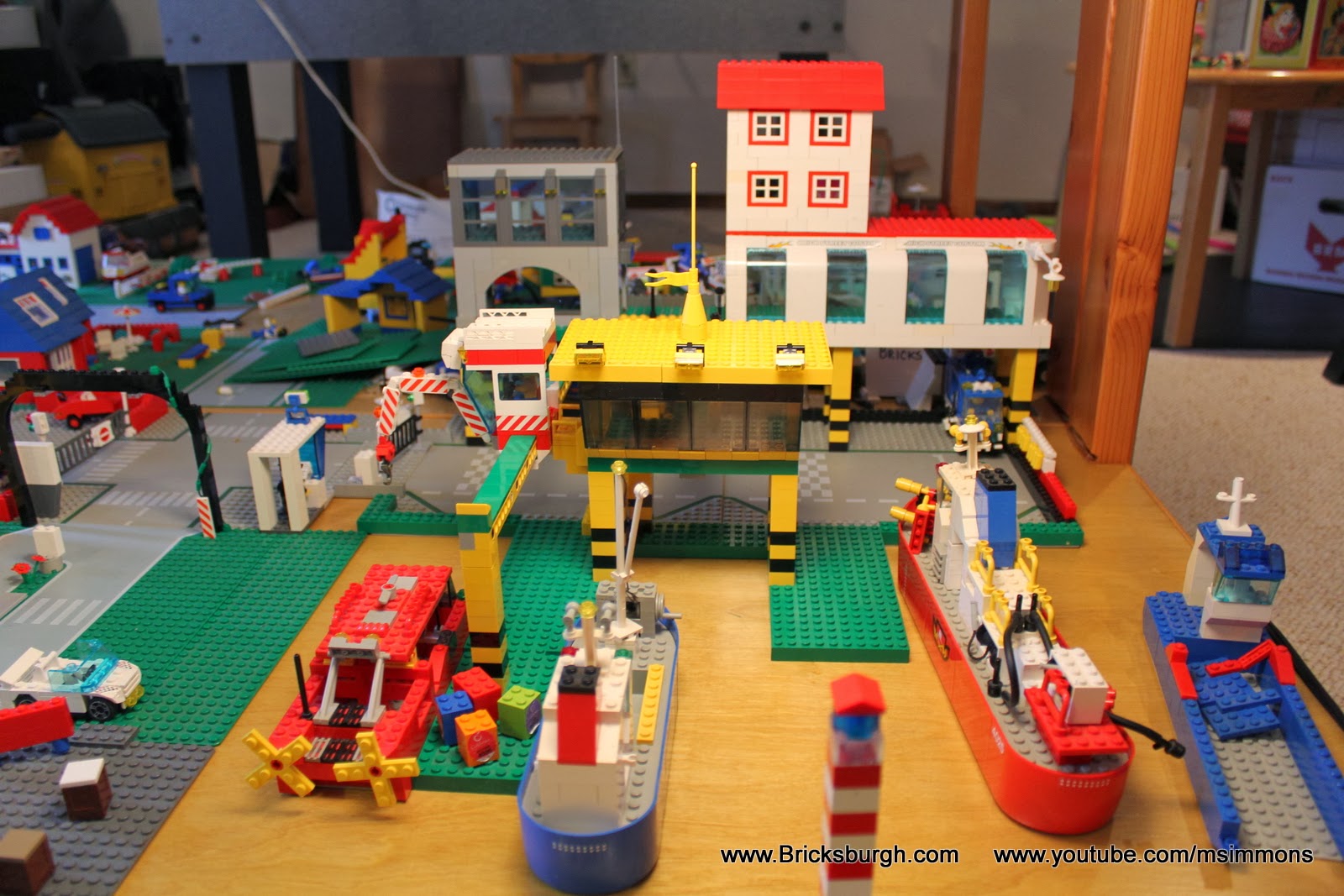 Overall the complex is built on extra Speedway plates (you can see their REAL use by clicking HERE). Previously we'd used surplus intersections, but the speedway plates actually give us more road surface and you really won't see the markings once all the truck traffic shows up.

Suspended above the roadway is collection of 3 buildings which are accessed by a broad staircase and bridge.  The largest one is white and red.  The lower level of this building features tall windows and one large room accessed through double doors.  We don't have a specific purpose in mind for this large space yet (the largest uninterrupted enclosed space in Bricksburgh) but it will probably serve as an exhibition hall/convention center.  The top 2 stories of the building-- which is the tallest on the lower levels of the Lego tables-- will eventually be furnished into residential space, perhaps even trendy lofts. 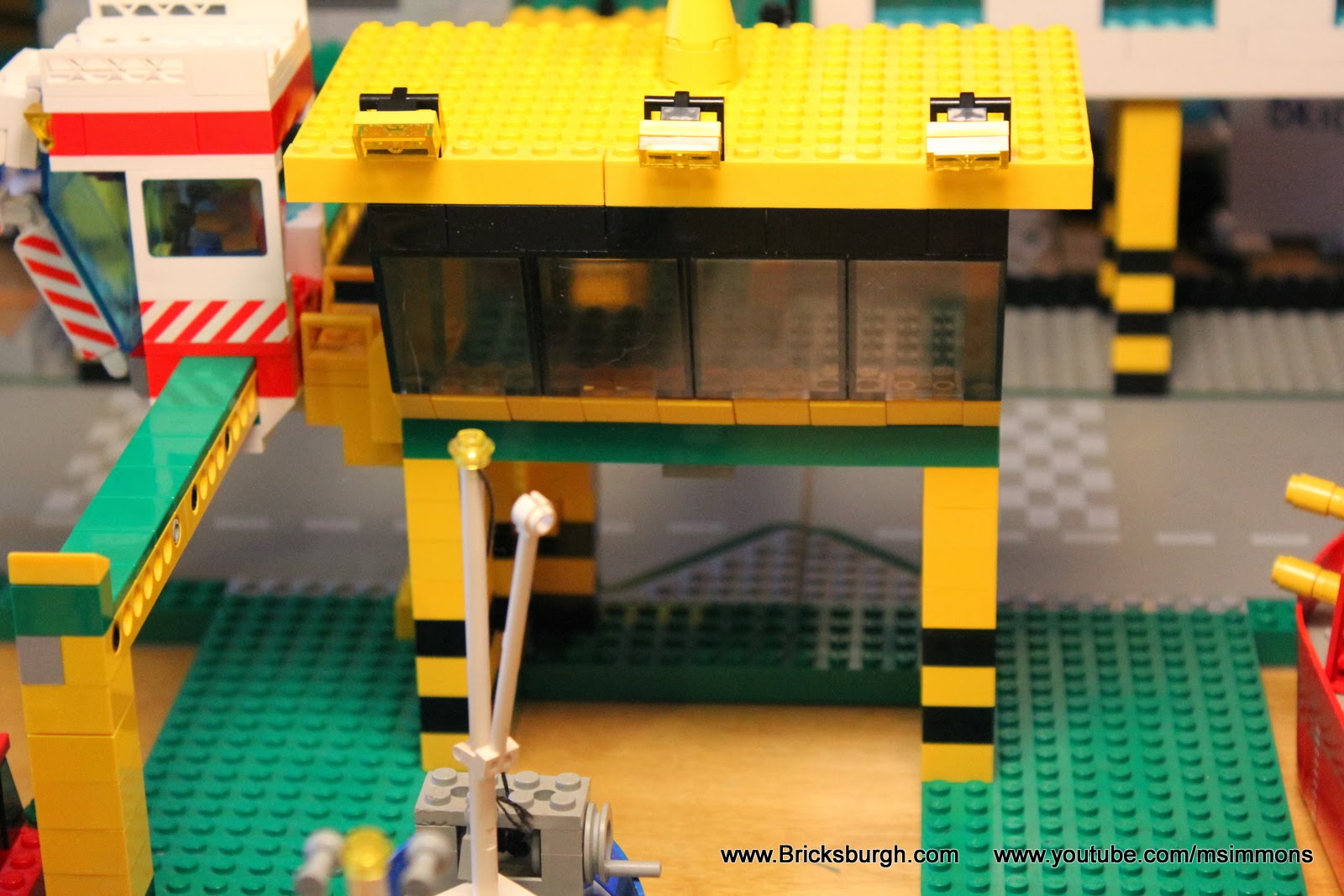 From the waterside, the most prominent building is the yellow one with the smoked and sloped windows.  The harbormaster will have an office here as well as the coast guard and harbor pilots.  Essentially, all port services will be located in some part of this building.  It already has floodlights on the roof to light the docks below and will add more rooftop antennas and radar.  The interior is still empty but will soon have all the necessary computers and charts. 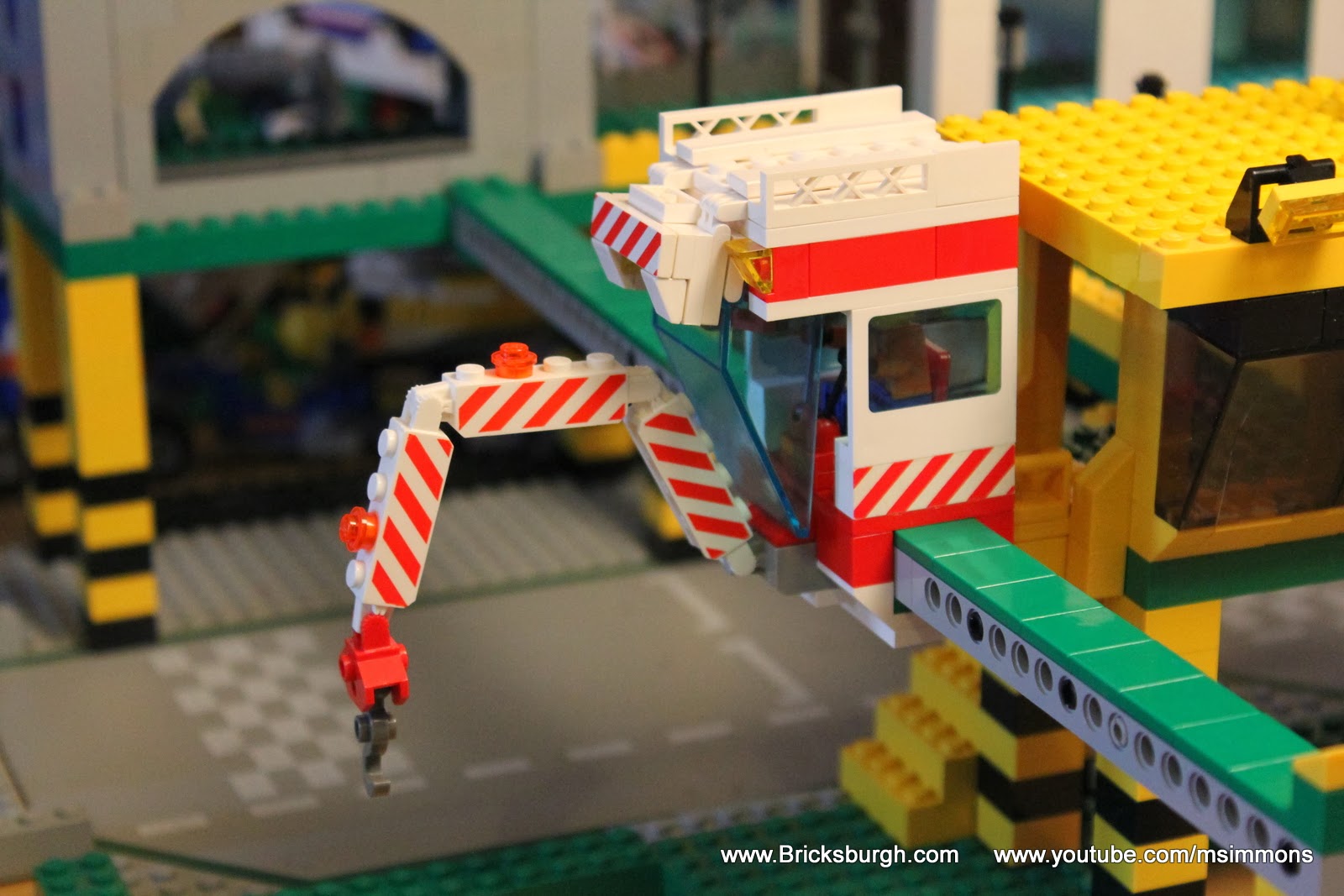 The left side of the building has a doorway that leads to gantry to the crane operator's seat.  The crane "docks" against this gantry when not in use.  Spanning the roadway and well out into the first dock is a track for the crane to slide on.  Using this track the crane can load and unload from trucks parked in the complex to and from ships docked at that end of the harbor.  At the moment the crane doesn't have a rotating function but we will probably add that at some point and put a more realistic boom on it as well. 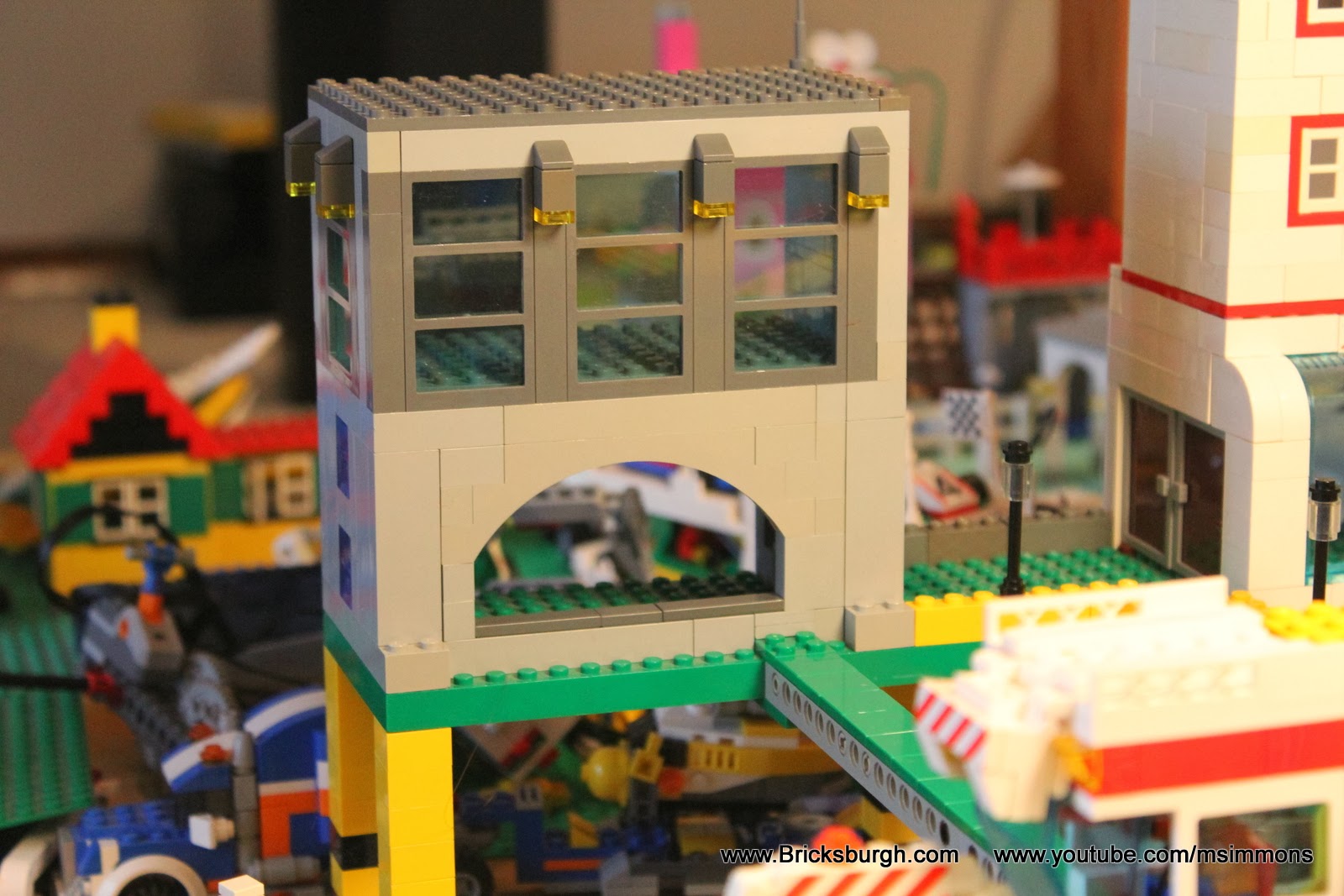 The last structure on the upper complex is a combination warehouse and office building.  The lower level (we're still working out how to put windows in the archway) is a large open space with a secured door.  The upper level is a top quality office space -- available for lease! --  that would be perfect for any number of businesses.  It has a commanding view of the whole harbor complex and even over to the nearby airport, making this an ideal location (with plenty of secured covered parking too!) 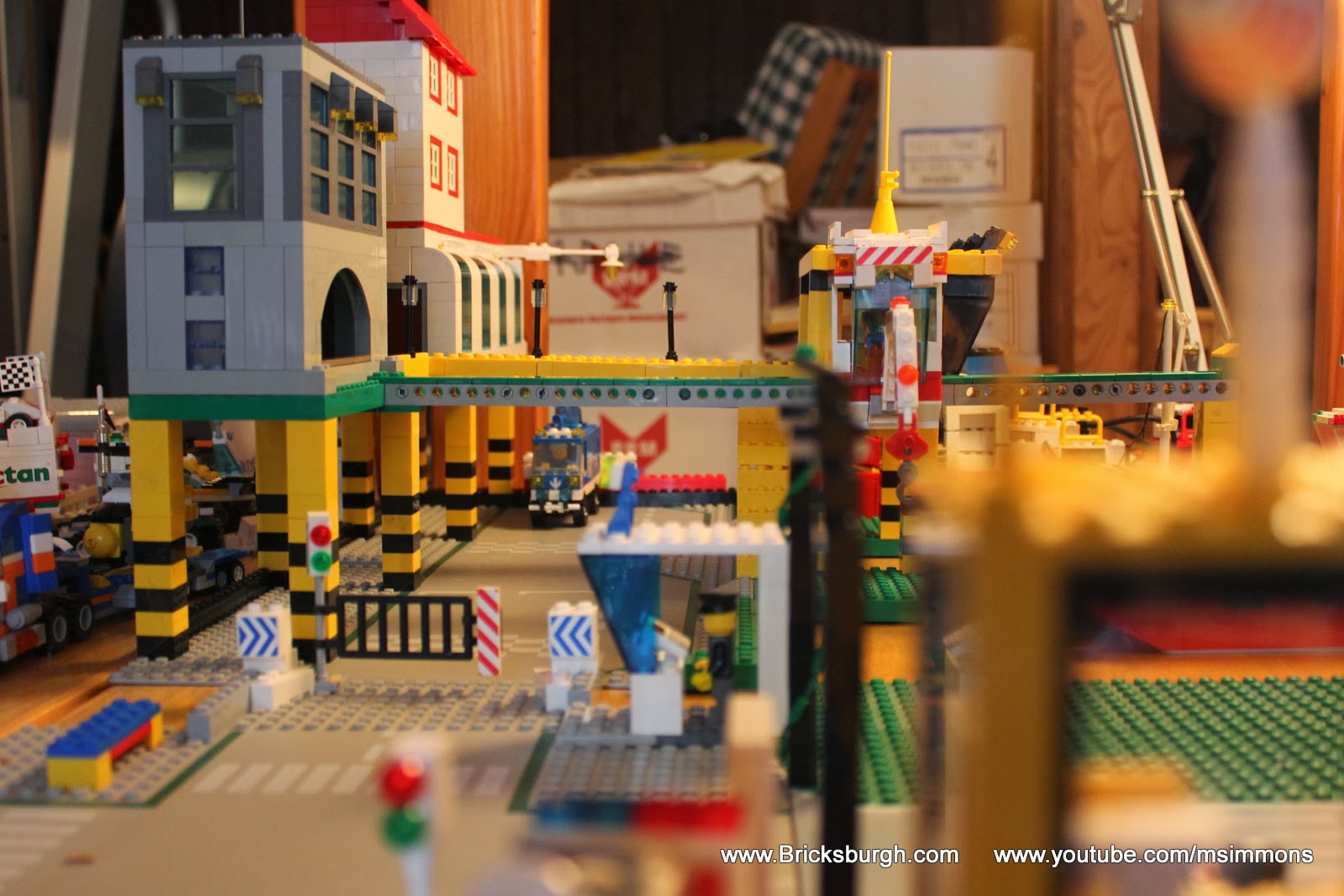 Speaking of security, the entire harbor complex is not open to the general public.  There is only one road connection and it is guarded by harbor security.  By controlling the traffic allowed in the complex, we make sure that there is always lots of room to maneuver the various trucks around.  There is a bus stop just outside the gate to help the workers and residents get to and from the rest of the island.

Here's a short video clip of the complex we made at the same time:

Thanks for visiting us here at www.bricksburgh.com and check out the videos on our YouTube channel at www.YouTube.com/MSIMMONS.
at 6:00 AM