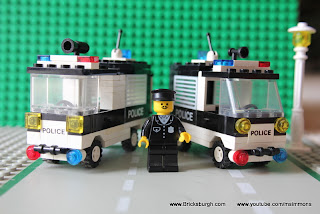 What?  No burning hotel??  I know I promised that would be next-- but it'll be a couple more days to polish up that post.  In the meantime, we've had a lot of questions off our YouTube Videos regarding the police vans.  We love to answer our fans so, as requested, we hurried up a video tutorial on our Police Vans, with some more information added on here.
First of all, before I forget, here's the video:
As we discussed in the video, these vans are quite different in construction even though we went to a lot of trouble to match up the color schemes so they LOOK a lot alike.  Both of the vans are based on Lego sets, but ironically the van that we had first now looks the least like the set it was based on! 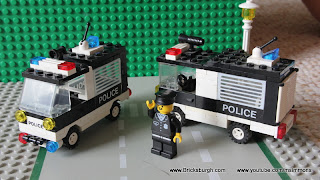 The van on the left is a complete redesign of a little noticed Lego set (more on that later).  The van on the right is actually-- deep underneath-- the van from the Lego Police Patrol Set.  If you look at that set compared to these vans, I think you'll agree the jail van actually looks more like the original set! 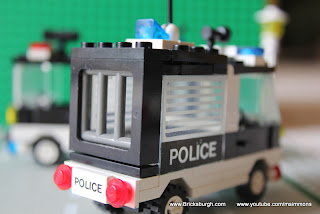 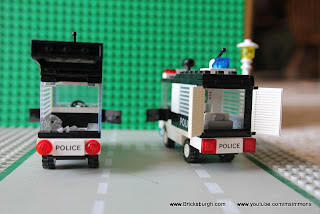 Alright, so what "little noticed" Lego set has a back opening jail bar section?  Well, none.  The design was modified from the "little noticed" promotional Stadium Security Set. I turned the bars around and redesigned them to open from the rear. 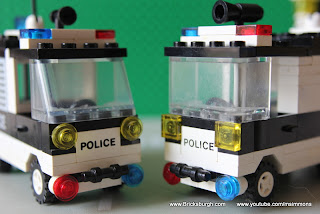 Then I simply took the basic architecture of that set and adapted the nose to look more like the other van.  The original van I then changed to a more massive look befitting a command van.  It was already longer overall, but by putting on the squared off windshield and squared headlights it really looked more impressive. 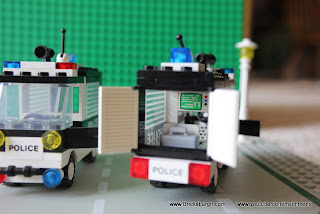 Since the patrol set van wouldn't be carrying convicts around anymore I also needed to come up with a better use for it's back area.  The gap between the seat and the back door is perfect for stowing the police chief's briefcase, radios, and other gear. 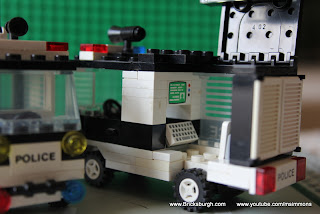 You'll note the area between the driver and the rear seat is open and a stud longer than the jail van.  That area was just wasted space in the original set but gave us plenty of room to install a computer terminal for the chief to use.  At some point we'll upgrade the monitor/TV piece to a more modern flat panel computer screen of the 2x2 tile variety...  as soon as I figure out the best way to mount it there.  It'll end up filling that gap between the keyboard and roof better anyway! 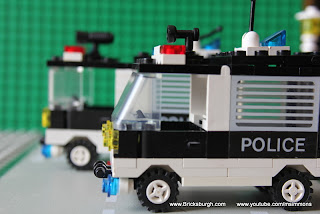 Again, here's a better look at the difference in profile between the two vans.  Building in the classic 4-wide style means we're often using nuance and eye-trickery to make something seem larger than it really is because we're trying to keep the overall sizes modest.  These vans are really only about a stud or two different in overall length but look how much more substantial the front end of the chief's van appears! 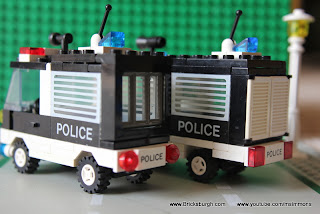 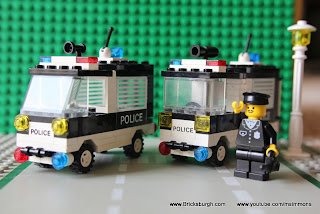