Rooms With a View

Last time we showed you how the Bricksburgh TV Station was built.  Since we're talking about how our landmark buildings in town came into being, it seems only fitting to talk about the City Hotel.  The City Hotel was a natural addition to the town.  After all, if the town is to be a vacation island with a famous beach... it would need a hotel-- and one that would offer First Class service! 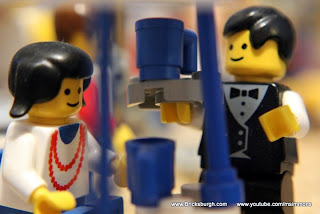 But what was the REAL inspiration of the hotel and why does it look the way it does?
You might be surprised....
I was never much of a beach person growing up.  Sure, we went to the beach now and then on vacation but it wasn't something I felt drawn too.  Well that all changed once we had kids of our own.  Suddenly I found the beach to not only be a GOOD vacation destination but the BEST place to go.  What's not to like?  Biggest sandbox you can imagine with plenty of water around to play in.

The Legotown lends itself to being thought of as an island.  Everyone's town is a self-contained city with clear borders.  Add in an airport and a harbor combined with roads that don't go anywhere and... well, it's an ISLAND!   If we're going to imagine people flying in to visit there must be SOME reason for them to come and thus, Legotown becomes a miniature Hawaii-type holiday destination.

The beach was easy to make.  Just add one beige baseplate, please.   We named it "Tyler Beach" (for obvious reasons) and put a quaint little beach house on it.  The beach house morphed from a rental for tourists to a little bed and breakfast type place that had locals living there all the time too.  I created the hotel "set" for Tyler as a gift and in typical fashion we couldn't just plop it into place, we needed some fanfare! 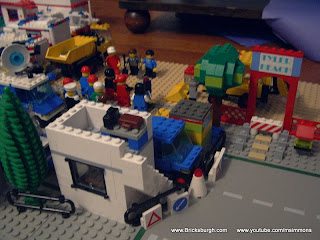 The entrance to the beach was blocked off for construction and the road blocked off.  The construction company brought their portable office back (from the TV Station project) and a press conference was called for the groundbreaking ceremony.  All the VIPs were there.  The beach house owner sold his land to a hotel company (whose executives flew in to make the deal) but he would stay on to manage the hotel.  You can see them with the mayor (in the blue suit jacket) ready to dig into the sand with their shovels. 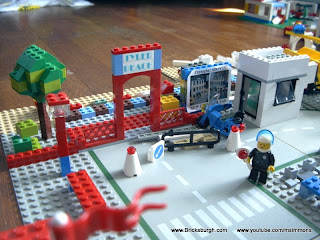 Turns out, our timing was horrible.   For a variety of reasons, right after the groundbreaking we completely rebuilt the entire town.  The layout change was very spur-of-the-moment but we used it to our advantage and the hotel would end up in a much better place with more room around it for parking and we'd be adding a boardwalk. 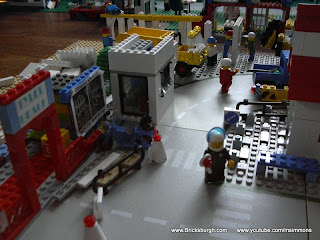 The hotel building itself is quite long.  We decided it would fit much better straddling a curved street plate and the beige beach plate.  The hotel would feature 4 guest rooms with a mixture of beds and a lower level restaurant (inside) that shared its kitchen space with what we called "The Sand Bar" on the beach end of the building.  In the background of this picture you can see the first floor's walls are already in place. 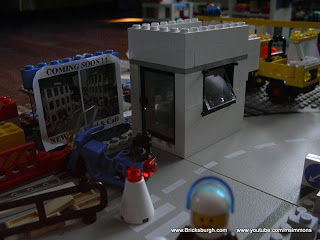 Naturally there was lots of advertising around town to announce the coming hotel.  In the new town layout we were able to open one end of the beach again and had a large "COMING SOON" sign there.  As you might have guessed, the picture on the sign was of the BUILT hotel-- after all, being a custom "set" I had to make sure all the parts fit right and had to make instructions for it before I took it apart and gave it to Tyler. 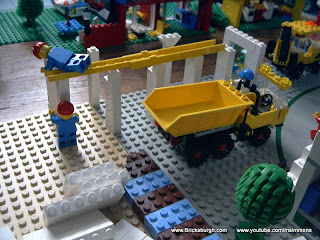 Workers are finishing up the main wall structures here.  Unlike the TV station project, we actually "shipped in" all the parts by boat and jet to add to the realistic logistical problems of building on an island.  It was quite a bit more fun than just dropping the pieces into place. 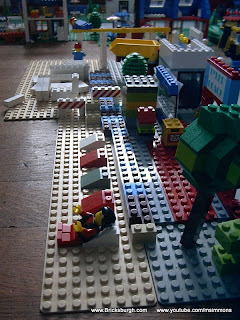 Looking down the beach here, you can see it is mostly open.  Barricades about halfway down the beach keep tourists and sunbathers from wandering into the construction zone.  The construction workers would be wise to keep their supplies farther from the water's edge, however, lest parts of the building wash out to sea! 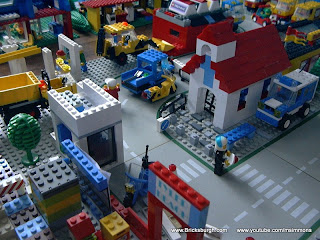 The road still had to be closed during construction but at least this time it wasn't a main part of town.  In the new layout the hotel was off on one end and more isolated from the rest of the downtown area. 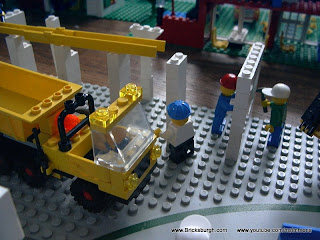 Tyler is really good as posing the people in realistic positions.  I always enjoy finding them working away quietly and they're constantly being moved around-- it's hard to get pictures of all the set ups he makes! 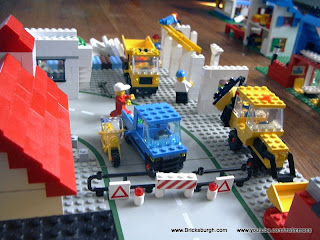 You can see the beach house owner running across the closed street-- I wonder if he just saw a mistake in the plans??  Speaking of which, if you really want to see what it looks like you'll have to watch the YouTube video tour.   I told you I would tell you where the design inspiration came from.  The colors were copied off a hotel in Ocean City, MD where we normally stay-- the Holiday Inn on the boardwalk.   I also added the balconies overlooking the beach so we'd have something in town to remind us of our real-life vacations.   As for the rest of the building's shape, it was actually inspired mostly be the Police Command Base set.  I just made it bigger and classier looking with its blue and white color scheme, but you can still see the tapered pilasters on the front were copied from the police station's facade. 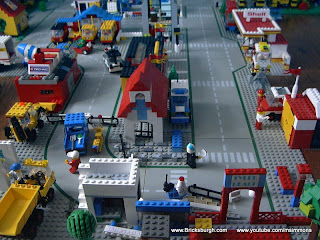 This picture shows a little more of the town and you can see how different the layout was back then.  Lots of long straight streets that we wouldn't have when we moved it all up onto the tabletop layout.   Made for great car chases! 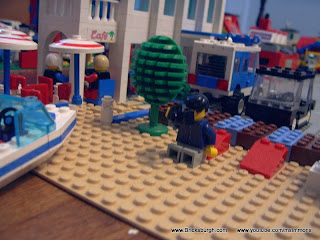 I missed the rest of the construction somehow.  Either that or Tyler got bored with doing it a little each day and just finished it off.  I really don't remember.   Regardless, here's the completed hotel open for business with guests already enjoying the Sand Bar Cafe and the balconies off the rooms. 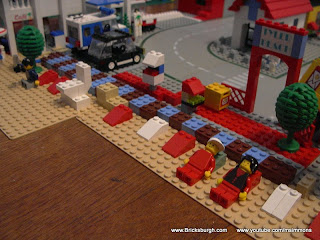 We added a blue and brown boardwalk to the beach front.  There's a mailbox there for sending postcards home to friends and an announcement kiosk and ATM.   The lifeguard chair was carried over from the previous beach set up (and has since changed completely to something more realistic).

Now that I've shown you how the hotel got there.... check back next time because we're going to BURN IT DOWN!