Race Track In a Box

If you saw our Race Track Preview video earlier in the summer, you know that we're getting ready to expand the town and have some racing events.  What you might not have seen (unless you looked closely in the 2011 Legotown Tour Update) is that we also added THE BEST TRUCK SET Lego ever made:  Indy Transport 6335. 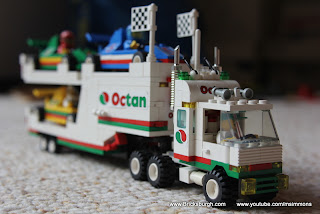 Read on for a closer look and see the modifications we've made to it.

Before we get into what we've done, take a quick look at the set over on PEERON.  The stock set is the most complex truck set that Lego ever made for town use.  It has many more parts that a lot of the buildings in the Lego catalog from that time.  The truck also shows a movement toward larger vehicles as the cab is still a 4-wide design but grows to 6-wide by the end of the trailer.  Other truck sets (like the Police Surveillance Squad 6348 from a few years later) would use a very similar structure but were no where near as complex.  The fact that the ramps system works so well is a real tribute to the Lego designers. 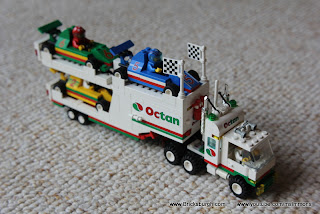 The truck certainly has a lot of road presence with it's extended cab and the sheer bulk of it.  Unfortunately that also makes it nearly impossible to drive around on Bricksburgh's city streets.  It will probably spend most of its life as a semi-permanent pit area.  The biggest changes to the tractor are added details in the trailer hitch area and a new rear bumper/taillight setup.  We also ditched the unimaginative roof pieces Lego specified for the side gas tanks and replaced them with more realistic looking pieces.   You can see all that better in the video (at the bottom of the page). 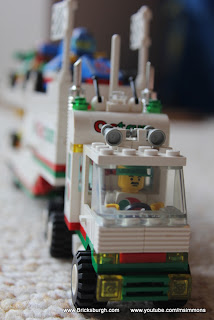 We actually bought TWO of these sets from eBay to get this one complete (the drivers' helmets were the hardest parts to come by).  Both sets were quite cheap because they were missing parts but together we have enough for two workable trucks.  Ironically, complete sets sell for prices that could easily buy multiple incomplete sets-- so shop carefully and you'll literally get "two for the price of one".  The truck not shown here is missing the large Octan stickers on the trailer and one of the red ramps-- that's it! 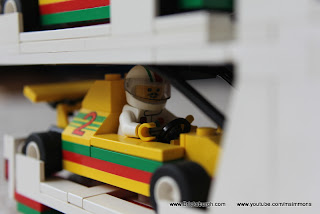 We also have another set of race cars that are nearly identical to these.  The other set is missing mostly the number pieces (we used blank slope pieces instead-- but in the same colors) and they don't have the metallic engine pieces on the back (they're black).   These second cars are great for having larger races and/or team orders. 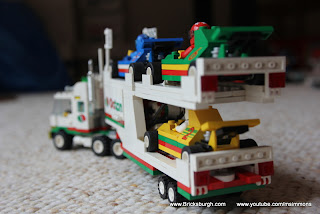 I don't think I'd enjoy bouncing around in a race car on the top level of a HUGE trailer... but minifigs have no fear!  In this picture you can see the metallic engine parts that we added.  Also note that the vertical supports for the rear wings are the same color as the car bodies-- on the original set these pieces are all black (a rare lapse for Lego, this seemed like an obvious upgrade to us and greatly improves the appearance of the cars). 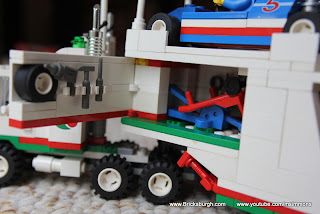 One of the best features of the trailer (aside from the clever ramps) is the large storage compartment in the front.  Not only does it easily house all the gear you could possibly need but when open it serves are a superb way to define a workshop or pit area.   The use of short panels to wedge the extra wheels into is pure genius! 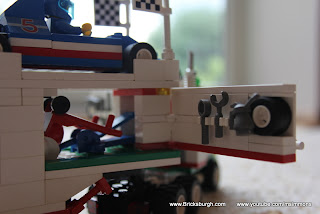 Oddly enough (for a race set) Lego also didn't choose to include a checkered flag in the original set.  Tyler took care of that lapse by adding two on the leading edge of the trailer.  They look good there and since only one is at a time, the other one helps to decorate the upper level which is used as a viewing stand during races (just like the motorhome roof hangouts you see in the NASCAR infield campgrounds). 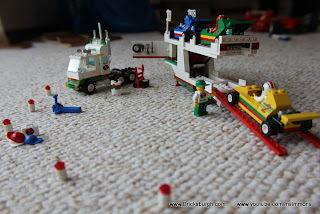 Unloading the cars means using those wonderful ramps.  Lighted traffic cone thingys come out of their storage in the tractor's extended cab.  In the original set the cones are in the compartment behind the cab but Tyler has decided to carry color-coordinated drivers' coffee mugs there instead). 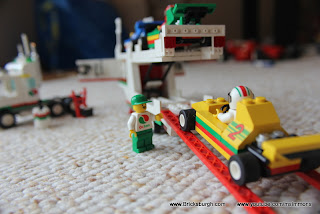 The red ramps slide out from under the lower deck (genius, I tell you!) and gently lower the bottom race car. 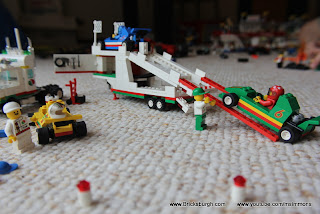 For the upper level, the ramps are moved out of the way, the deck lowered, and the ramps reconnected. 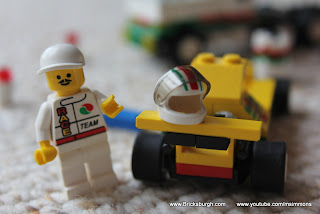 Here's a closer look at the detailed uniforms and helmets.  You can also see the color changes we made the back of the race cars. 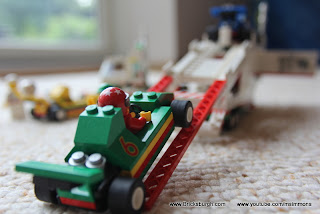 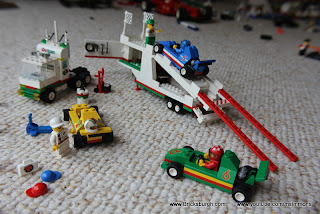 With the second car unloaded, a stop block between the two upper car positions is dropped down which releases the last car to make the long roll to ground level.

All this is perhaps best seen by watching Tyler's tour of the set.  You'll also get a much better look at the modifications to the tractor (not photographed well here) and how the ramp mechanism works:
For a preview of more future race track plans, check out our video: