In anticipation of our Lego City Buses Video hitting 1 million views this month (probably) on YouTube, I'd love to be able to post a tutorial on how to build one--- and might still-- but for now, here's a look at one of the very early prototypes.   We call it, the UGLY BUSLING: 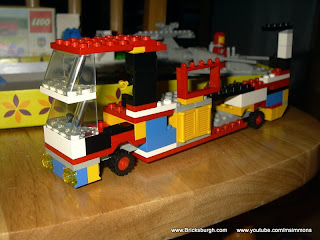 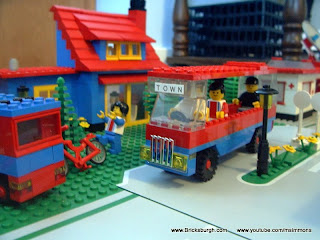 Legotown has always had a bus.  Even when I was a kid just starting out way back in the mid 1980s, one of the first custom creations I made was a bus (it had no roof... but it was a bus nonetheless).  When I started this prototype, the bus being used in town was a blue/red one.  It was a good size and looked reasonably good, but it wasn't high on "features" and certainly didn't look as polished as if it were an actual Lego set-- the standard we normally try to built to.

The first thing I wanted to correct was the front overhang.  City buses typically have the bus driver sitting AHEAD of the front wheels and the blue/red bus had the driver directly above them.  To get a more realistic look I needed to figure out a way to get the driver hanging out front. 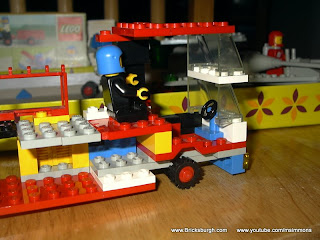 The problem was getting a floor under the driver without getting in the way of the wheel clearance.  As you can see in this picture, I didn't really succeed.  The front wheels were set farther back but the driver was still sitting right above them.  It turned out that due to the limitations of making a "classic 4-wide" vehicle that wasn't too long necessitated going for something that LOOKED longer in the front without actually BEING much longer.  This nose is only about 2 studs longer than the blue/red bus-- but it looks much more "bus-like". 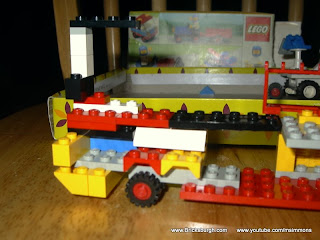 Putting a longer nose on the bus meant that the passenger area needed to long enough to balance the overall design.  It also meant that I was going to be pushing the limit of what would fit in town if I was going to also have the REAR overhang appearance that I wanted.  City buses usually have large rear overhangs too, after all, and the dimensions were getting out of hand.  Soo...

I decided to try and make a tour bus first, with luggage space, and then derive a city bus by simplifying that.  Luggage space would require two levels on the bus frame, one for the passengers and one for the luggage.  The compartments would also need some kind of access doors.  The most compact access doors I had were the old-style window shutters which are only 2 studs high, but by the time I added the passenger floor above and headroom for the minifigs, I was looking at a REALLY tall bus. 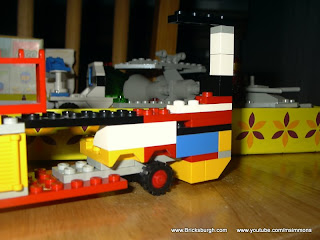 The other big problem that was rearing it's head was the rear wheel assembly.  Since this was going to be a tour bus first, I decided it would have a double-axle set up in the rear so that it would stand apart from the city bus I design later.   The double back wheels would also bring back some needed balance to the overall design that was missing now that the height had grown to more than a one-story building.

Alas, in the end the bus prototype I wound up with (pictured here) was just a BIG MESS.  Nothing looked right and I couldn't imagine any other way to rescue the design.  It was unbalanced, too long, too tall, and in the end it just didn't look like something Lego would make.  It was never going to look right in town. 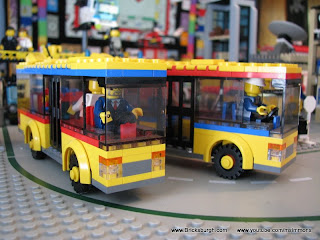 Eventually I came up with the current bus design (which I love) and I'm very proud of it.  Check back soon and I'll show you how to make one.

LEGOTOWN UPDATE:  Still working out plate plans for the town layout.  We're exploring the idea of two table sections, 2-3 levels each, that could be put together in multiple configurations-- with the roads connecting on each level regardless of which side of each table it touching... or any combination.   It's complicated.  In the meantime, we're preparing to post more videos soon.  Most likely they will feature some custom vans we've made recently.