We have a special fondness for our Bricksburgh TV Station.  It's a valuable part of any big news story and adds a lot of excitement around town to have cameras showing up whenever there's a fire or a large cat attack. 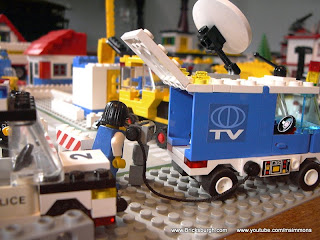 Lego did a great job when they made the Crisis News Team set but there was never an official TV station set... and what good is a live truck if there is no station to send the signal to?
Well..  we solved that!
Soon after getting the news van (which we immediately customized into something more realistic), we built a small one-room shack with a big satellite dish on it.  That was our television station.  LAME!  So I began making plans for a larger and more opulent facility befitting our town. First thing we had to do was demolish the old station-- and before that, we needed a temporary station. 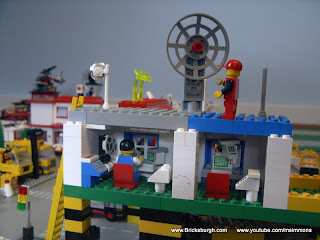 So with the help of the TechMan, all the equipment from the TV station was installed in a temporary facility (which was a vacant office space above the harbor). 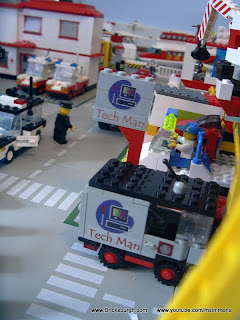 The TechMan would also be quite important during the installation of new gear in the new television station once it was built. 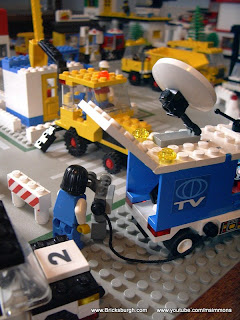 Smashing a building is pretty big deal in such a small town so, of course, our freshly modified news van was set up to transmit the big event to the rest of Legotownies. 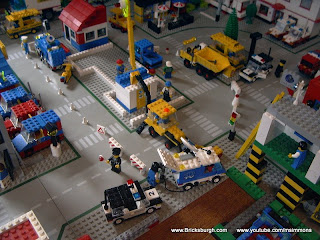 Here's an overview of the center of town as it looked in those days.  The footprint of the new station was outlined in the short white wall so that we didn't accidentally take over the space that was needed. 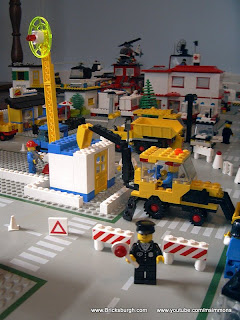 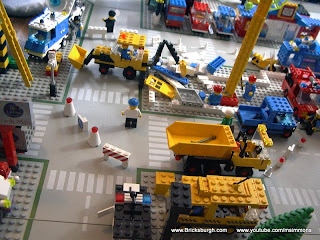 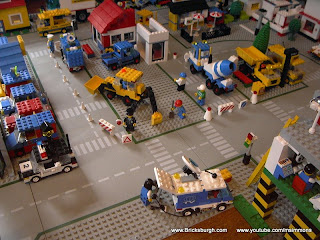 With the old building cleared away, the construction crew started setting up shop.  First thing they needed, for such a complicated project, was an office to keep the plans in.  You can see their temporary quarters set up partially in the street on the edge of the site. 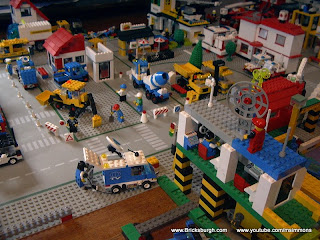 A little wider picture shows the temporary station in the harbor overlooking the new building's site.  Demolition done, the construction barricades are moved in so the main street in town can be reopened. 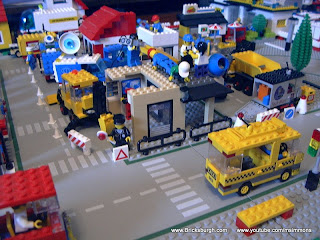 The first floor of the station goes up quickly as construction trucks join the rest of the town's traffic rumbling past the site.

The street level studio area is one of the first things completed.  Pretty soon townspeople will be standing there with signs hoping their relatives see them on TV! Naturally the TV crew is documenting the construction and here you can see one of the foremen being interviewed for a live report on the progress.  Meanwhile, the TechMan is busy installing part of the news studio set. 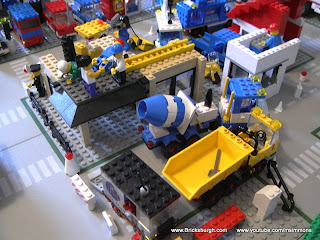 It's pretty hard getting all that equipment parked within the construction site! 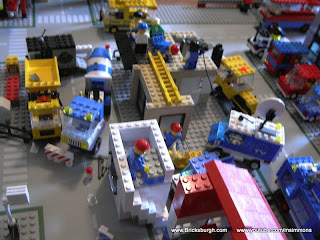 Here you can see the temporary office the construction company set up.  They have a closed in workspace in the bottom and a staircase outside leads up to a platform the looks over the whole site.  What better place to make sure the building matches the plans? 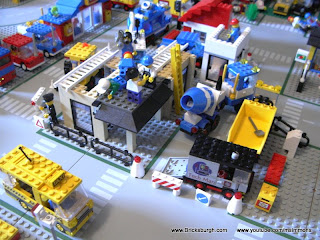 Ladders are getting set up to be used as scaffolding and supports for the 2nd floor. 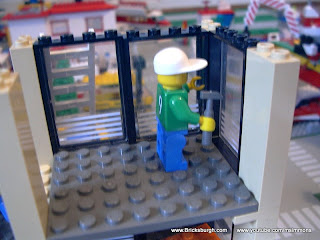 One of the construction workers doing the final fitting of a glass panel in the 3rd floor, where the news crew's lounge will eventually be created. 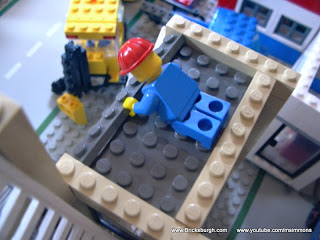 On the shorter part of the building a worker installs the floor of what will become the main edit bay, 3 stories above street level. 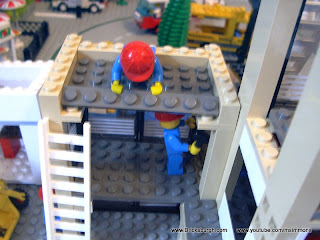 While the edit bay floor gets installed, a worker below fits the door onto the newsroom.  That door leads to an outdoor balcony and the main control room.  It is also a great place for reporters to do live shots-- especially on days when there are parades on the street below! 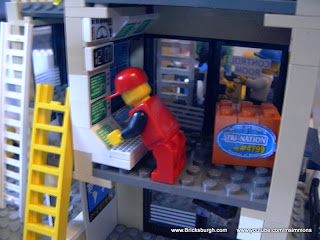 Here's the TechMan hooking up the main control room on the 2nd floor in the new station.  You can see the unfurnished studio below him.

Want to see how the Bricksburgh Television Station looked once it was finished?  Check it out HERE!  BTW, in case the station looks familiar, if you're a Lego fan, it should!  The design of the station-- though heavily modified to gain more floor space and another two finished floors-- was inspired by the Police Central Precinct set.