All Around the Neighborhood

Lego table construction is UNDERWAY!   Updates on those will be coming soon.  In the meantime, here's a look around the old neighborhood. 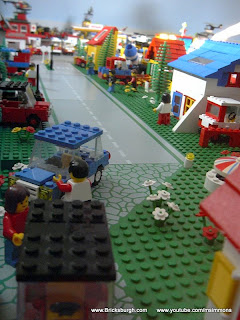 We'll start out on "the floor" layout with a nice long look down the street... before we move to some pictures of buildings that aren't around anymore.
Due to a happy find at a garage sale, the neighborhood has always had nice green grass street plates since Tyler and I first set it up as father and son.  When I was a kid, the only road plates I had with green grass were the runways at the airport-- Legotown was just a concrete jungle "back in my day"! 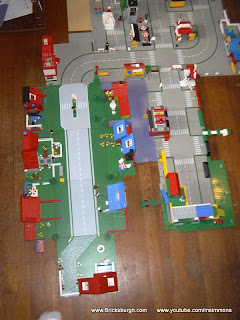 The first town layout was just on the floor, no tables.  The neighborhood was a separate arm of streets that extended out towards Tyler's bed.  It was bordered on the one end by the hospital (in various forms) and along the other edge by a narrow canal or causeway that separated it from the harbor area, which was its own peninsula of street plates. 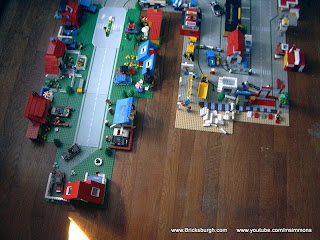 Eventually, the harbor was relocated to the other end of town next to the airport and its former peninsula was redeveloped into a tourist destination.  In this picture you can see the beginnings of Tyler Beach and construction just starting on the City Hotel.  You can see that project in more detail here. 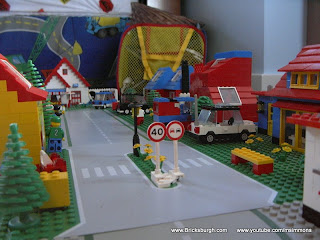 The entrance to the neighborhood also made use of some modern "traffic calming" measures, with its split roadway.  Commuters were also helped out by the bus stop that serviced the neighborhood. 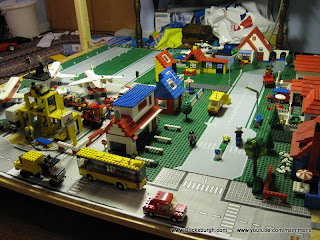 The last time we had the town set up, on the old table, it was located on the lower level next to the airport.   That layout had its own problems!  One of the nice things about this location was that it created a lot of interesting problems for the town as commuters tried to get into and out of the city center.  It was also a nice little community as we added a narrow side street (where the yellow houses were) to create room for more structures.  Worth nothing, the first house on the left was a combination building; the lower level was a hardware store and the upper level was an apartment.  You can see the parking spaces out front marked off.     It was partially demolished at some point and when we packed up the town there was enough of it knocked down that we will not bother rebuilding it the same way. 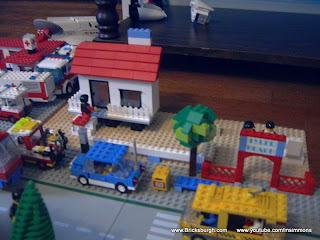 Before the big City Hotel was built on the beachfront there was just this little beach house.  The house was a rental property, so the taxi company made quite a few trips between here and the airport.  The owners of the house eventually became the owners of the City Hotel.  Tyler (with my help) had this entire story line wherein a big shot executive from the hotel company came in and had meetings with the mayor and the beach house owners, who then announced the start of construction with a big ribbon cutting ceremony for the TV cameras. 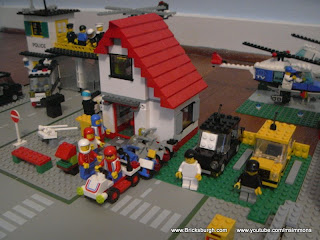 The Hot Rod Club was originally made using leftover pieces from a Creator set.  This version of the building is long gone-- in fact, it has been mixed up into two different structures now, a house and the new Hot Rod Club building. 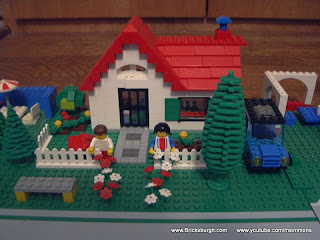 After the beach house was torn down for the hotel, parts of it wound up in this little house.  As pictured here, this house no longer exists.  It was torn down and changed in to a new house that currently has the only enclosed garage in the neighborhood. 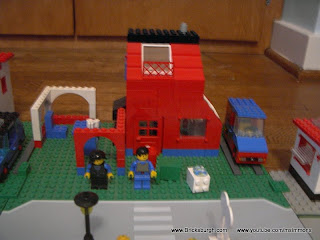 I guess you could call this the "spare parts" house.  It was made of, well... spare parts.   It didn't look real great but the second floor walkout balcony was unique.  It is a feature I'd like to try and reintroduce to the neighborhood at some time-- this house was completely torn down and rebuilt. 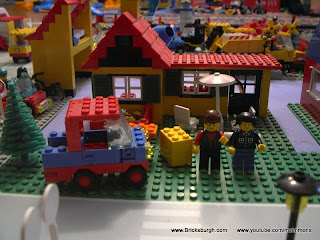 My first house set when I was a kid!  This quaint little house used to be owned by the only white-haired old woman in town but Tyler moved her out!  The current owner is the church pastor and his wife.  They have the same little truck, but it has been "pimped up" a little bit! 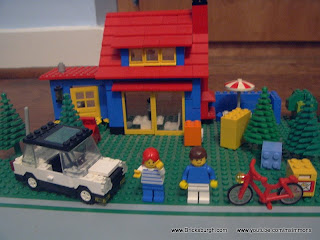 The house always reminded me of the years I spent in Belgium as a kid.  I guess this style of architecture strikes me more as Belgian than Danish.. or German.  At any rate, it is a spacious house and one of the nicer gardens in town.  I should point out that most of the houses pictured on this blog post have big chunks of bricks out in their front yards-- those are package deliveries.  I don't know why, but apparently the pictures were taken right after a truck dropped off packages for everyone.  Strange. 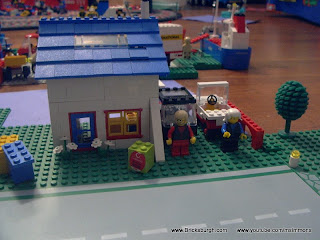 That old woman kicked out of the yellow house?  Well, here is where she ended up... but at least she found a husband in the process!  We made this house out of spare parts too and it was constantly falling apart, especially the roof.  Eventually we demolished it completely.  I think Tyler moved the old folks into the Condo building downtown....  downsizers, just like the nice couple we bought our REAL new house from! 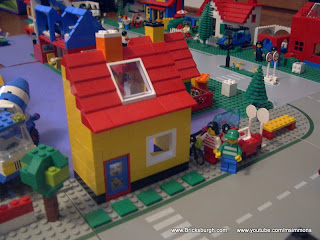 Another house made from spare parts!  It has survived better than all the other spare parts houses and still exists!  We've since improved the window and door on the first floor but it is basically the same, a nice little starter house for someone.  When this picture was taken it was on a busy street in the city but it did finally make its way to a quiet side street in the neighborhood across from the other yellow house. 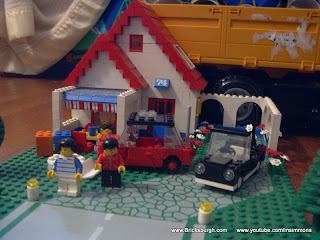 One of the nicest houses we have, this white house is also one of the oldest sets that I have.  It has seen a few changes to the interior (much of the furniture has been upgraded for more detail) but the outside is pretty much just like it was brand new. 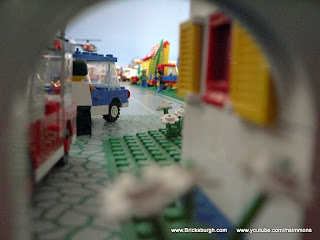 How about a nice little artsy view from the private driveway all the way down the neighborhood street?  I still remember when we had a big police chase end with a crash here... but that's another story. 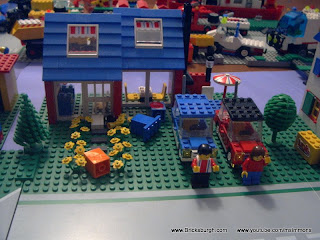 Definitely the most modern of the houses in the neighborhood.  It has that "open concept" first floor that everyone talks about and a very nice two room layout upstairs with a clever arced doorway.  I think they need to tidy up their lawn furniture though.
If you want to see how the neighborhood looked when we last did a video tour of it, I've helpfully embedded it right here!