Sold as part of Lego set# 7641, the Bike Shop was originally built far from the beach.  We've since expanded it and relocated it on the new tables into some prime beachfront property, as you can see in our earlier post "Boardwalk Changes". 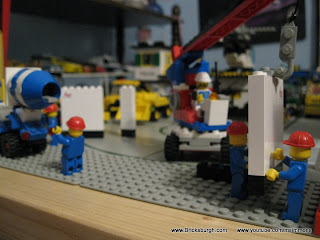 Ah, but that is now... this is THEN.   When the Bike Shop was first built, it went up very slowly as Tyler posed the vignettes of the construction site.  Click on through to see the details and the special equipment we built to get the job done. 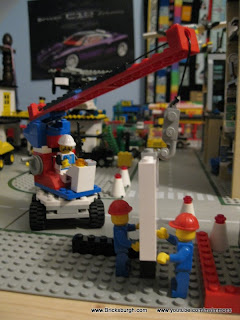 The first thing you notice is the truck mounted crane.  We didn't have any kind of cranes in town-- still don't! -- so we needed to make one.  When Tyler first said he wanted to build the shop this way, I grabbed the bins of unused Lego pieces and we quickly cobbled together a workable crane.  We had most of the pieces necessary to rig on up, but no extra taillights or windshields! 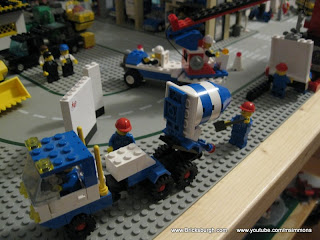 Like most of the newer Lego sets, this one came with big chunky pieces for the wall sections instead of a bunch of individual bricks.  Even modern buildings are sometimes built using prefabricated sections, so we just trucked the parts in and craned them into position.  Naturally, we needed cement to secure the sections to the ground... so we called in our trusty Cement Mixer. 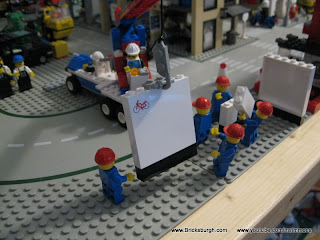 To move each section they first had to get a bracket attached to them so the hook would have something to grab it with.  Not sure what the door frame of this building is made of, but apparently it can be lifted into place by one strong construction worker. 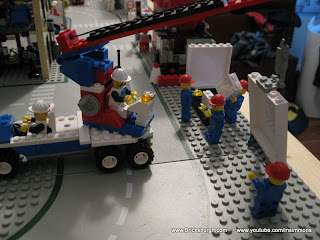 Small detail that might not be immediately obvious-- even though the crane is fairly primitive, the guys running the crane have their very own construction uniforms. 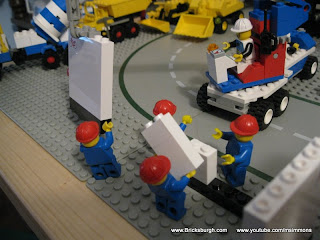 As the front of the the store takes shape, you can see the construction crew's equipment at the ready in the background. 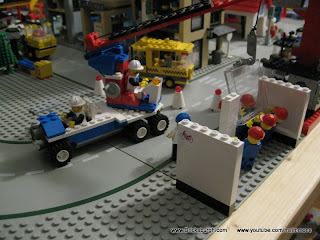 The crane repositions for the delicate task of installing the big window.  Behind it you can see the road blocked off and the yellow flatbed truck bringing more parts of the building to the site. 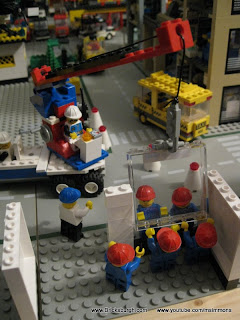 Careful guys!  Notice that for THIS step, the boss man makes an appearance, wearing the blue hardhat. 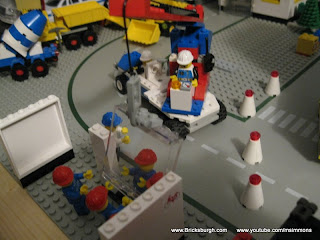 I know I've written this before, but I love how Tyler positions his minifigs. 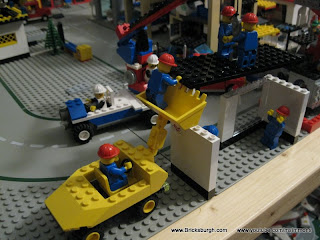 Getting the roof on takes more than just a crane because it the roof could swing around and damage the structure.  Using the loader to help stabilize it makes the job easier. 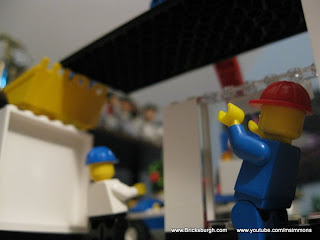 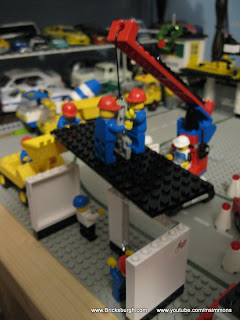 Maybe not consider OSHA-safe, but I can't help but think riding a roof hung from a crane would be fun. 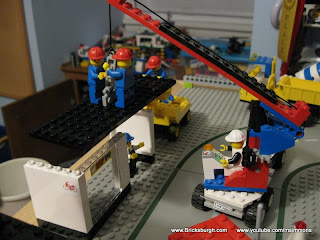 These pictures, btw, were taken in our old house-- as you can see by the harbor area sitting on the window seat in the background. 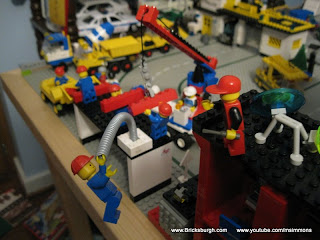 As the roof structure gets completed, one of the construction guys seems to be having problems with the air conditioning duct. 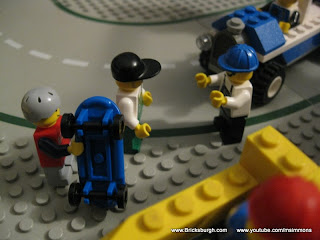 The shop owners are eager to get their business started! 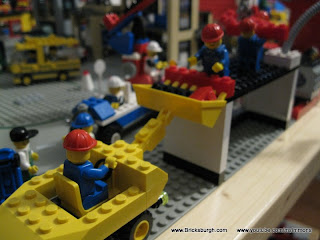 The loader is perfect for moving supplies up to a first story roof. 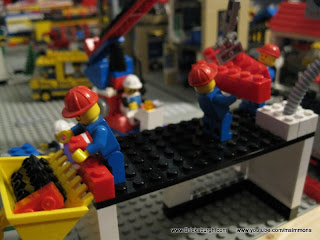 While the set was meant as a one story building, I think our expanded shop looks a lot better. 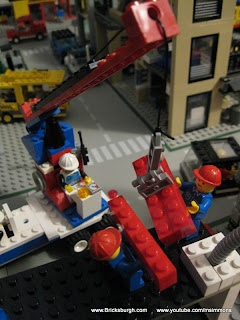 I like how it takes a crane to lift 2 of the red pieces, but our strong construction worker can hold one all by himself. 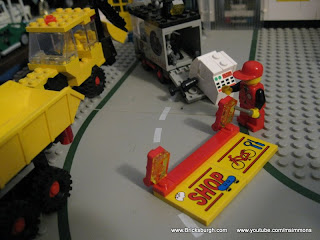 You can't expect to have a successful business without some advertising and signage!  Luckily the TechMan is ready to get the lights set up before the sign is hoisted into place.