Over the years I've made a lot of custom sets for the kids.  One of the most popular was the TechMan company.  The TechMan company started out from a single idea:   I wanted to use a pair of grey panels that I'd found.   From panels...  there came a grey van...  then an IDEA. 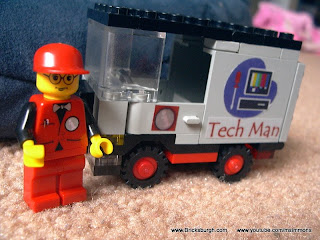 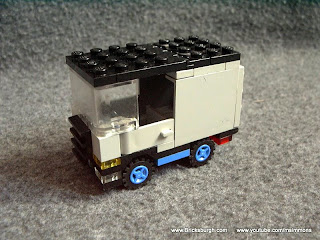 The basic design of the van is just like the red package delivery van Lego set.  All I really did was change the front end around to make a flat windshield work and I switched the rear door to act as a ramp (for heavy equipment).  Once I had a nice grey van I needed to find a company that could use it. 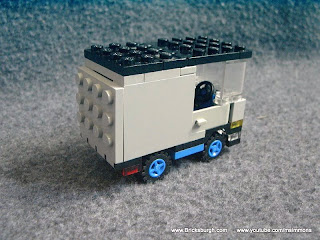 As you can see, I originally build the van to have blue trim.  I thought that looked best with the grey color and I didn't have any blue vehicles that needed blue wheels...  but yet, I had blue wheels.   So they went on the van (but have since been put on a crossover/pickup type vehicle).

Around this time we were preparing a place in town for the new TV station.  All the equipment needed to be "installed" and Tyler thought regular construction workers were ill-equipped for such a technically demanding task.  I also suggested that the Stuff Mart probably wasn't the best way for folks in town to get their computer gear-- but we didn't have a computer store or technicians in town.   A-ha! 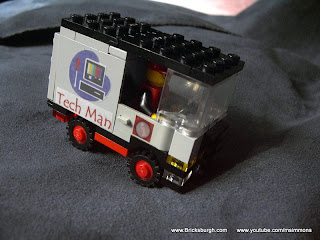 I found a smart looking minifig that had a vaguely "Geek Squad" kind of look to him and went to work making a custom logo to put on some stickers.  The "TechMan" name came into being and I swapped out the van's accent color from blue to red to match the newly named TechMan's uniform color. 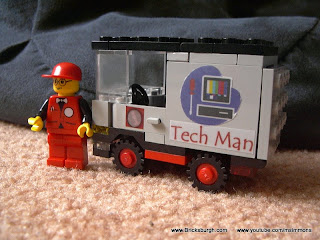 Now the TechMan has grown his company to have his own building where he does everything from sales to repairs.   He makes house calls and goes around town keeping all the electronics working (he was very busy during a recent upgrade to the computer system in the airport control tower).  The van is loaded with all sorts of diagnostic tools/gear from screwdrivers to cables.

To see more on the TechMan and the actual building he works out of, check out our TechMan Video Tour.