Two Are Better Than One

When I was a kid my Dad stumbled into a sale on Lego and made the best of it.  Unfortunately, he had no clear memory of what sets I already had.  Fortunately, with Lego, that doesn't matter.  You might have see the extra large repair shop in town, for example, and maybe you noticed the bigger hospital too? 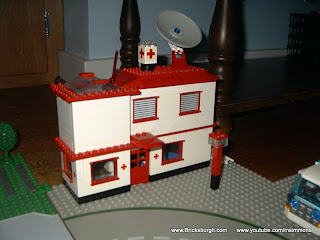 The two hospital sets actually spent most of their young lives as separate structures.  One set was built exactly as Lego intended, like this:  Lego Set 6364, while the other set was reconfigured a bit to make a grocery store (the car was made one color and turned into a civilian one).  Years later, as Legotown grew, the car was reclaimed and the hospital added on to with other parts. 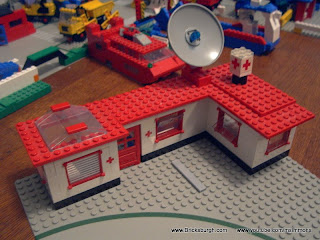 When Legotown was rebuilt with Tyler, we went ahead and combined the two sets into a sprawling ranch-style hospital.   This was an admittedly uninspired design.   While the roof took a little work to pull off, the building too closely resembled the original set and looked more like a "clinic" than a "hospital".  It also took up a lot of plate-space, leaving little room for parking. 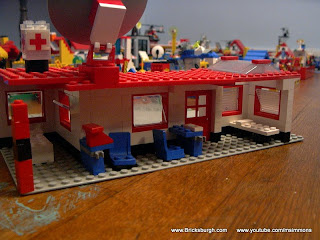 The interior set up of this haphazard combination wasn't very useful either.  The reception area was huge and there was only room for two treatment beds-- and both of those were surrounded by windows which wouldn't make for a very sterile operating room. 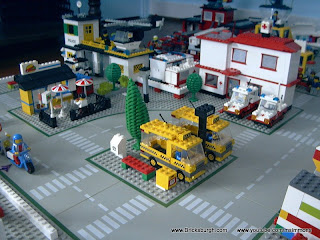 When rebuilt, we decided to reduce the "out" and to go "up" so that the new medical center would have the same overall height as the other emergency services.  The hospital's new size led to a redesign of the entire town, moving the hospital away from the neighborhood area and into the downtown proper.   We set it on a new town square and tried to give the city a more "pedestrian friendly" look. 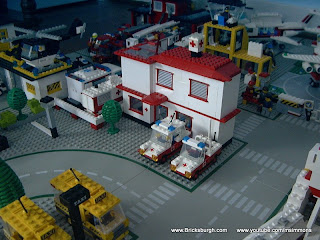 The hospital had two reserved spaces for patients and families (seen on the left) and ample parking for its own fleet.  Doctors' cars parked out front where the blended into with the other city traffic, while the ambulances parked in a special area accessed from the road behind the hospital so they would not loom over all the other cars in town.  We designated that area the "ambulance bay" and would keep that idea when we moved the town from the floor to the table. 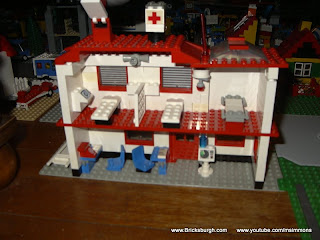 The interior of the new hospital is a much better (though still simple) representation of a small facility.  It has a reception/medical records area and right across from it is a flexible space.  Sometimes this space is used for vaccination programs, waiting room, or therapy space.  The rest of the time it is the emergency room, where patients are wheeled in from the ambulances and treated on the stretchers before moving upstairs.  The second floor has two patient beds with a privacy divider and an operating room.  The operating room also has a divider (not shown in this picture) and natural light from the skylights (and no opening windows!) 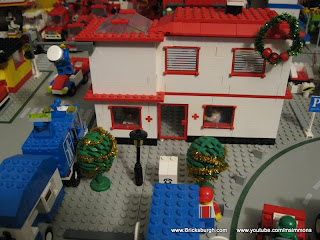 You can see the hospital up close and check our the ambulance fleet by watching our YouTube Video Tour.


Thanks for visiting us here at www.bricksburgh.com and check out the videos on our YouTube channel at www.YouTube.com/MSIMMONS.