A few years ago Tyler received a new ambulance set for Christmas (or a birthday?).   The set was built around a much wider chassis than anything else in the town and didn't really fit it.  You can see the original set here: Lego Set 7890.  In order to fit into the town we'd need to rebuild it and make it closer to the 4-wide vehicle standard...   and here's what we came up with: 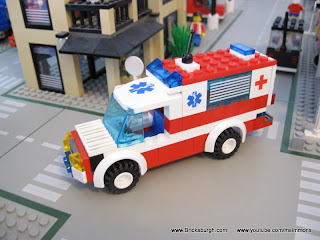 Well, obviously it's still a LITTLE wider than the other vehicles in town because of those big white fenders, but our buses have the same fenders so it still fits.  The redesign is actually a little longer than the original but its still pretty close to the same size as our other "vintage" ambulance: Lego Set 6680. 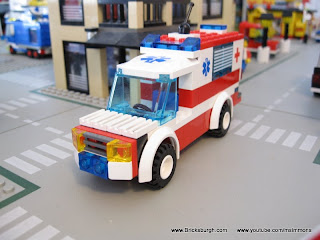 The nose is completely different with a defined hood area that was necessary to accommodate the white fender pieces.  We tried to round it off a bit with those wedge pieces so that cornering would be easier to do.  The overall look is less like a van/bus that the original set had and more like a pickup truck cab with an ambulance box on the back. 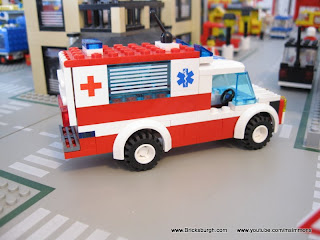 The side pieces are mostly the same as the original set but we did substitute the plain red cross panels in so that it would have some relation to the other medical vehicles (which use the red cross logo exclusively). 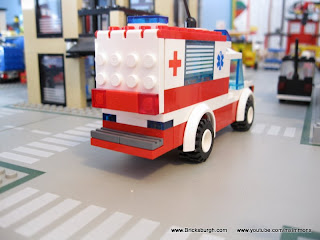 One major change was that the internal height of the ambulance floor.  By moving the fender pieces inboard to achieve the 4-wide chassis, the load floor had to be raised to sit above them.  We tried to lessen the visual effect of that from the outside by putting on a larger rear step bumper and inserting additional emergency lights into the corners. 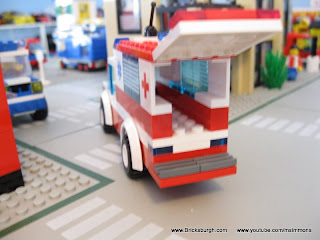 Of course, one side effect of the higher load floor was that now we had to raise the window line.  Since the new ambulance set's windows were shorter than the panels used in the vintage ambulance we wound up needing that red stripe section to raise the windows--  which also meant we were raising the stretcher when it is loaded in.  The stretcher only fits between the panel sections when used in a 4 wide chassis so, even though not pictured here, the stretched actually hangs on the those window sills and not directly on the ambulance floor.   No worries though--- it will still hold a stretcher with a minifig on it!  You just have to hope your patient isn't claustrophobic because the roof is very close to their face.!

You can see the entire Ambulance fleet (and the hospital) by checking out our YouTube Video Tour.