It's over.   Our big deal on a new house fell through because the seller valued cheap over legal.   Looks like the Lego won't be moving anytime soon so maybe we can get our video work going while we wait for the next dream house to come along (we're very picky).   Houses and their problems are the theme this week so I'm revisiting some very old pictures from when Legotown lived on the floor (as opposed to the table it's on now). 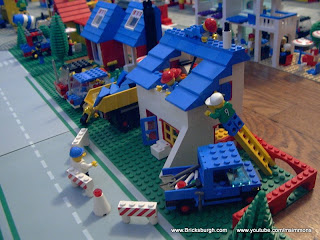 An older couple lived in this house way back then.   They were older because they had white hair...  in case you wondered.  The house was made with lots of mixed parts and cobbled together a little sloppy because we didn't have very many spare parts at that time.   It was two stories tall but the roof structure was always flimsy because of the large sloped skylight windows (similar to those used over the fire engine garage bays on our fire station, if you're familiar with that set).  You can see the house all in one piece in our old Neighborhood Tour video. 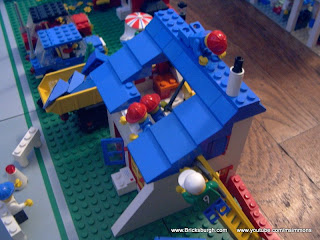 Sometime after it collapsed AGAIN, the older couple had the construction company out to pick up the old roof and redo the structure.  They must have paid lots of money because the construction crew was HUGE!   The crew wasn't particularly careful though; no scaffolds and tipsy ladders were the norm. 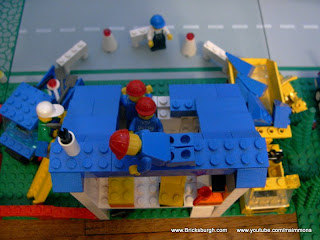 The new roof was better (we braced it on the backside with some long skinny plates) but the house didn't survive much longer anyway.   It was demolished and with a new supply of extra parts, we were able to make better house as a replacement.  Well, that's not entirely accurate.  The house was replaced several times over since 2008, and now includes a short shared driveway in the general area where it would have stood.  You can see it quickly in the 2011 Legotown Tour.

Thanks for visiting us here at www.bricksburgh.com and check out the videos on our YouTube channel at www.YouTube.com/MSIMMONS.
at 1:00 PM