Growing up overseas and spending lots of time on ski slopes in the Alps was very inspiring.  We rode cable cars all over the mountains to get around the ski areas and like most Lego kids, I was determined to replicate real life in my Legotown.  I don't have any surviving pictures of the BEST cable car system I made....  all I have is this, a crude "cargo" version: 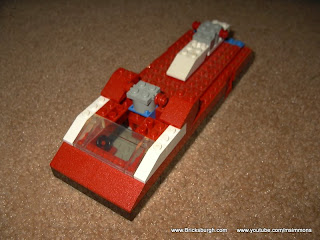 I know it doesn't look like much, but bear with me... it'll make more sense in a minute.
Real cable cars are basically just the passenger portion of a bus hanging below a wire.   I had a really good glass enclosed cable car at one point but it's parts probably went into a building somewhere.  While unpacking the old Lego I ran across this one instead, which isn't nearly as attractive, but it'll give you some idea how the system worked and you'll easily be able to make a better one than this. 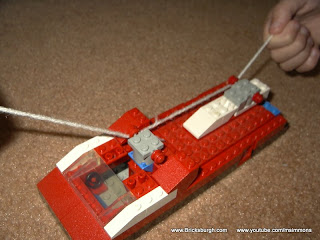 My town at that time was rapidly expanding and didn't fit on the floor of room anymore, so I spread it up onto an empty bookshelf about 2-3 feet off the floor.  My cable car and a helicopter pad were the only links to this "mountainous suburb".   The "cable" was made of your basic string, which I discovered PERFECTLY fit in the standard Lego wheel hubs once you pulled the tires off.   Sloped pieces were paired to the axle pieces to keep the cable from pulling completely out-- in theory, this would allow a cable car to "derail" but not to fall.  In theory. 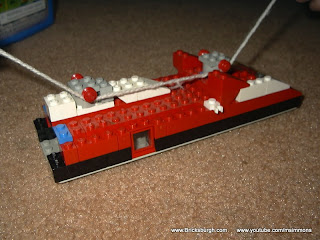 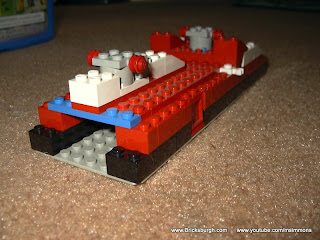 In reality, the axle pieces would slowly work themselves loose with each trip the cable car made from town to mountain and back.  Inevitably, the pieces would pop off with no warning and send the cable car plummeting into town with results that resembled a large jet crash.  This cable car in particular was much heavier than the passenger cable car, especially when loaded with cargo through it's rear access door (the door is missing in these pictures).  Falling from a 2+ foot drop, plus forward momentum, this cable car would cause quite a bit of dramatic devastation on the unsuspecting citizens of Legotown.   While this made for lots of rescue opportunities, it was a clear sign that my Lego skills at the time were not good enough to make sturdy cable-hung transports.

The best solution, of course, would be to use a Technic style frame work to rigidly mount the axle pieces onto the cable car... but I was still several years from really understanding Technic.