After I posted videos on our YouTube channel showing the new Lego table, I immediately began getting all sorts of requests for instructions on how to build one.   This was quite flattering!  The video shows the table after it was set up, but I thought this would be a better place to explain how it was built and why you should not build one...  and why this table could very well not survive much longer. 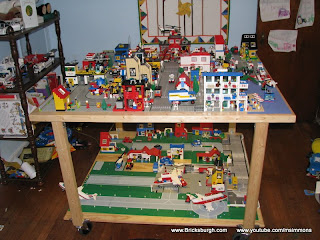 The table project was not something I was interested in doing.  We have a 60 year old house that needs constant updates and repairs and I have a full-time job.  The last thing I needed was another project.  However, Legotown became an issue as it grew to cover nearly every spare inch of Tyler's room floor.  The room could not be vacuumed without causing widespread destruction on the town-- which was, itself, harboring a vast amount of dust.   After one too many sneezes from her son, my wife strongly suggested that I needed to have an alternative plan if Legotown was to survive.

When I was a kid we once lived on an Army base in Zweibruecken, Germany, which had immense windowsills in the apartments.   The windowsills were about 18 inches deep and made of nice flat and smooth marble or stone (I was too young to pay close attention).  The apartments were set up so that each room had windows along an entire side with the wide windowsills below them and long radiators below that.  The windowsills proved to be the ideal height and length (also nice and toasty warm in winter) for a long central road form of Legotown.   All the other places we lived after that, Legotown had been on the floor.

I was remembering this nice long raised windowsill and it occurred to me that I could make a raised platform to hold Legotown.  From there the idea grew to a second level... then wheels....  then lights...  Pretty soon I'd created a daunting design but with no alternative idea, it became the plan. 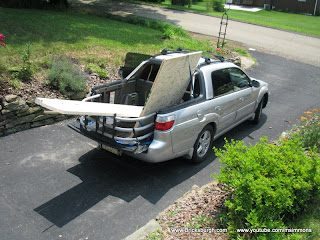 The table is essentially one sheet of 4x8' plywood, a couple 2x3" boards about 8' long, and a couple 2x4 boards.  That's really it!  I had the plywood sheet cut in half at Home Depot before I left (it would not have fit in the truck otherwise--- not easily, anyway).  The 2x4s were routed out and mitered to make a frame around half the sheet (so that the sheet would drop down flush into it) and the other half of the sheet became the bottom shelf.   As you can imagine, the top is quite a bit larger than the bottom shelf and the whole table is decidedly top-heavy (a definitely mistake).   The 2x3s were then each cut in half and made into the legs.   I don't remember how long they are but it's a comfortable height, even for Mia (though she can't reach much farther across the table than 2-3 plates deep). 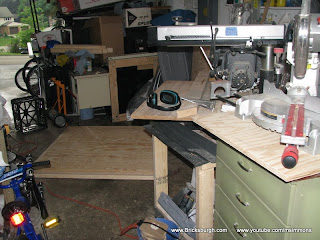 Sounds simple enough, right?  WRONG.   My plan didn't allow for a frame around the bottom shelf because I thought that would raise it too far above the floor and "pinch" the airspace between it and the upper shelf.  Instead I relied on brackets and bracing to mount the shelf.  This would give me enough room to mount wheels underneath the lower shelf but still keep it quite low to the floor for its size.   I accomplished that, but the lack of framing makes the whole table very unsteady--- so unsteady that we had to add several more braces and brackets to keep it all square and level. 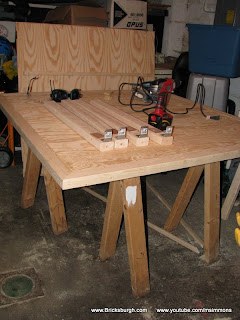 The table was too big to assemble anywhere but IN the room itself and we very nearly were unable to do that.  As we scrambled to hold the table in place so it could be screwed together, it wobbled and swayed and threatened to collapse at any moment.  That upper shelf, by the way, is VERY heavy!!  Once we finally had the table stabilized we finished the bracing and trim work.  Even now the table sways and creaks when it is wheeled around...  and I have ongoing visions of it collapsing onto the lower level and smashing the neighborhood and airport to plastic pellets. 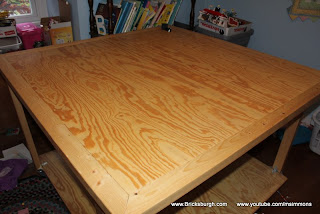 Here you can see how the plywood top is nested into the 2 x 4 "picture frame" pieces.   This was necessary to grow a 4' chunk of plywood into a top that would support 5 plates+ each direction (since the plates are 10" square). 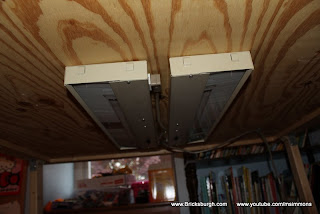 My favorite touch is the lights I added to brighten up the lower level.  When turned on, not only does the lower level look brighter, but the table looks even cooler!

Sadly, I think the table is doomed.  Since the table is too big to fit through the door of the room, it must be taken apart whenever we move (hopefully soon).  The braces and brackets we rushed to screw in as the table moaned and sagged during its final assembly are likely to not be easily remounted after the move.  The table will likely get rebuilt but I don't know that it will be used for Lego again.   The town has continued to grow and if we get a new place with more room...  there are more possibilities.... 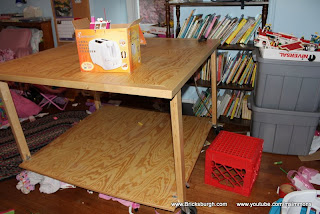 This last picture was taken in May 2012 as the town was packed up to move to a new house.  At this time it looks like the table will not be reused as it stood in this room for about 5 years.   I might modify it... but most likely I'll just start from scratch.  The new table--- however it comes into being -- will be at least 3 levels, narrower, and longer.

Thanks for visiting us here at www.bricksburgh.com and check out the videos on our YouTube channel at www.YouTube.com/MSIMMONS.
at 10:00 AM