Once we move into the new house the Legotown will be getting some upgrades.  Among the first buildings to get upgraded will be the Office Building.  It will gain another floor (for a total of 4) to bring it closer in height to the Condos.  With that in mind, I thought we'd take a closer look at its history so far. 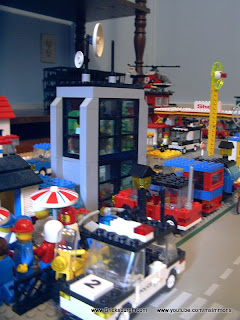 Like many of the things in town, the Office Building started out as a couple parts that needed to be used for something.  I had a couple large window pieces and a few of those 1x2 columns in grey.  What to make?  Looking around town there were a lot of houses and a lot of emergency services but not much in the way of places for people to work.  We needed jobs!  Jobs!!  So an office building idea began forming.   I ordered up more of the windows and grey pieces and made a little 2 story office building. 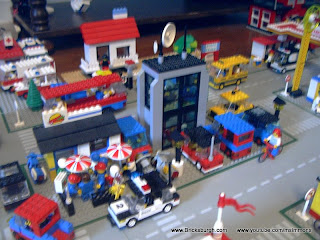 When the town was young (for this generation) the office building fit in pretty well despite its short stature.  It was also conveniently located to the snack bar for the lunch crowd. 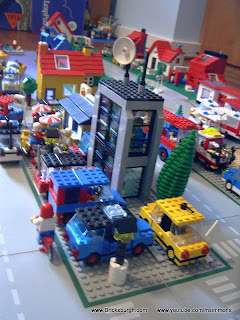 Of course, even with a small building, commuters quickly clogged up all the available parking.  What do you expect in a world where cars only carry one person?? 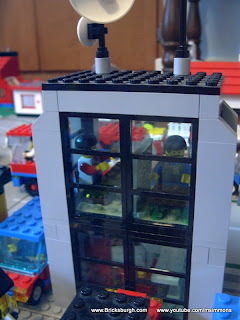 The interior of the original building was inspired by the Dilbert comics and my experience working a summer in an insurance office.  There was a receptionist with file cabinets below and on the second floor there were two beige cubicles.  What would an office building be without cubicles? 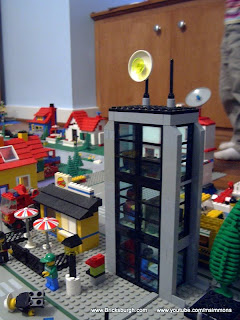 As the town grew the office building had to grow too.  The first addition came while the town was still on the floor.  I ordered up some parts and-- inspired by Donald Trump and The Apprentice (which Tyler had discovered and already tried to "fire" me at one point)-- we added a boardroom as the new top floor.  The added height gave the building better proportions (and added more JOBS!) 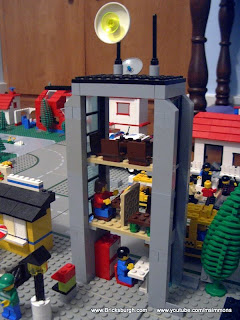 The front of the building is just a "curtain wall" of glass and black trim pieces, completely unattached to the floors themselves.  It is a very simple structure and makes it easy to photograph the interior.

I'm not sure what the new top floor will be when we add it.  I already have the parts for the structure part of it (it will match the rest of the building, of course) but nothing planned for the inside.  I was thinking perhaps a "big shot" office where our local CEO could reign over the underlings in town... but maybe not.   When it is added it will almost be the same height as the Condo building even though it will have one less floor-- but its floors are much taller, just like a real commercial building's floors would be.   I am pretty sure the Condo will still be a little taller because of its longer antenna.