Good morning!  We're just back from vacation and gearing up to resume our posting "schedule" this week.  Tyler will be taking over more of the blog entries, especially the "historical" posts that will feature pictures from years past.  In addition to the "historical" posts, we'll be keeping you updated with new photography and videos on our YouTube Channel.  It's morning again, in Bricksburgh! 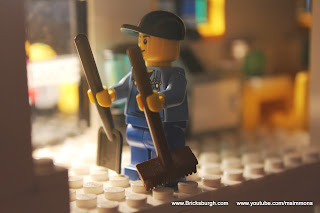 This picture was taken using our new Ikea light-- which we bought specially for Bricksburgh.  Looks like the janitor is cleaning up the office at the beginning of the work day.  In case you don't recognize it, that's the upper level of the new police headquarters.  Looks pretty realistic, right?
Certainly we can't expect to achieve anything that is-- literally-- "realistic" when we're talking about plastic people in an overly colorful plastic world.  On the other hand, when the lighting is realistic it really enhances the pictures and the storytelling.  The typical Lego pictures are, at best, flatly lit using the ambient light in the room where the Lego display is.  At worst, the photographer uses a harsh camera flash.  We're guilty of both techniques though usually our pictures are done without a flash in a brightly lit room.
The other "faux pas" of Lego pictures is the angle of the lens.  It is too easy to take pictures WAY above the height of a minifig.  Again, realism isn't really a viable goal when we're talking about plastic people, but getting the lens down to the perspective of a minifig does make the viewer more engaged in the scene.
We've already discussed how to get close to the Lego people in our earlier post, but until recently we had no way to make dynamic lighting changes.   Luckily, Ikea offered a cheap solution in the form of a $10 desk lamp that we can clamp to the table edges, raising and lowering the light source as needed.  You've actually already seen the light at work in earlier posts, but I thought it was worth pointing out. 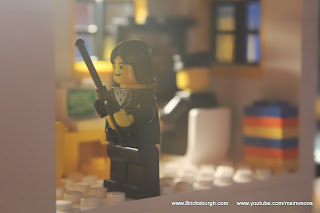 By lowering the lamp down into a "bright dawn" position, we can get lens flares and create the look of early sunlight breaking through the windows of the police station.   We also have some colored gels that we will be experimenting with to simulate moonlight, sunset, etc and a scrim to soften the harshness of the light.   Look for the new techniques to start appearing-- intermixed with the "historical" pictures, of course-- as we go through the Summer.

I'd mentioned in the beginning that we'd been on vacation and I wanted to take a moment to apologize to those of you who have loyally followed and visited this blog.  It was our intention to write some pieces in advance of our trip and have them post automatically... but we were so overwhelmed with our own schedules that no one was able to complete enough posts to do so.  It was also my intention to take several minifigs on the trip with us, so that we could have a little fun taking weird pictures of them as we traveled (we were in Chicago, Indianapolis, and Columbus, OH) but that also didn't happen.  That could have been 3 more posts-- EASILY!  Oh well.  Obviously we're still trying to program our brains to think like bloggers-- and I wanted you to know that we appreciate your being patient with us as we learn.

Thanks for visiting us here at www.bricksburgh.com and check out the videos on our YouTube channel at www.YouTube.com/MSIMMONS.
at 11:59 AM