In the interests and long running tradition of "Throw-Back Thursday"--  which dates all the way back to 2011-- today's post features our town as it appeared back in its FIRST version.

Tyler and I were watching news coverage of a disaster somewhere (I forget where but it's possible these are from around the time of Hurricane Katrina) and we decided to act out a relief effort.   Of course we only had ONE town, so the mission became one of airlifting supplies and rescue workers from the airport. 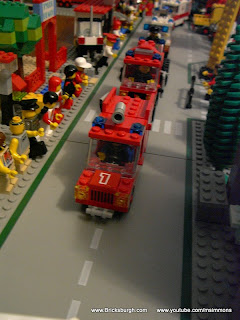 Upon their return from their operation, the town threw a "Welcome Home" parade for their heroes, followed by a community celebration.

The parade wound through most of the major streets in town.   At that time the town was very long and skinny with only a two streets that stretched the entire length of town and a third that went along the waterfront.  The route for the parade started at the airport and went out along one of these streets, back on the other and the waterfront street was completely closed for the town block party. 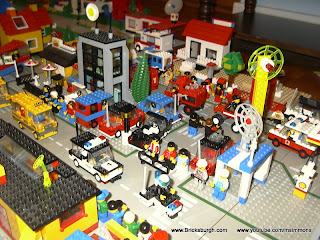 In this picture you can see the first generation TV station, beachfront hotel, office building and one of the earlier hospital designs.  All of these have been dramatically changed and improved since. 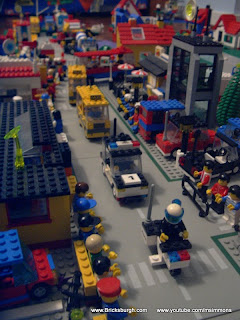 The original police motorcycle in this picture has since been reconfigured into sidecars for the current motorcycles.  You can also see the first police cruiser here, absent some of the decals and markings it would later get. 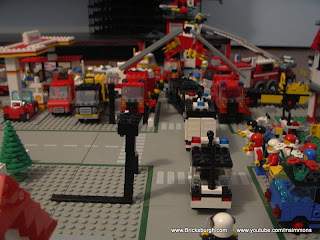 Leaving the airport, the returning rescuers first went under the arch made by the first department's ladder trucks.   If we'd had a properly sized American flag we'd have hung it here! 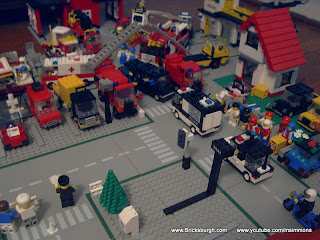 The mayor's limo is passing under the fire ladders here with his police escort.  At this time there was only one police van and it was not assigned to the chief.  The jail van had not been built yet.  The white house on the right was an early version of the Hot Rod Club. 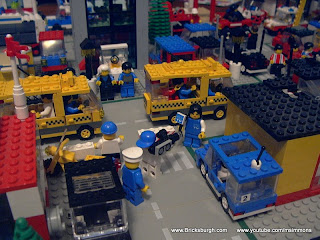 The taxis were brand new at this time and proved very useful for carrying the rescue workers.  The blue TV car was later replaced with a much larger station wagon and this car was made back into a privately owned one (you might remember it being squashed by Catzilla). 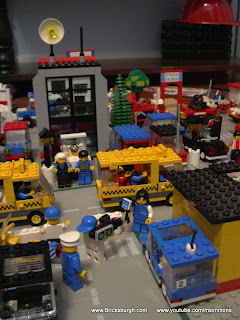 Amusingly the office building is only two stories tall here.  That was the original size of it because when I ordered the windows I could only get six of them.  Four went on the second floor and the first floor has a blank wall on one end and a door on the other.  As I acquired more windows, the building grew-- about 3 times bigger now! 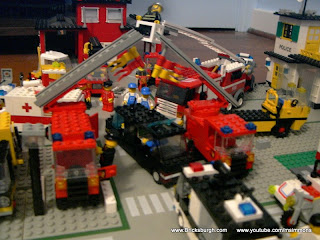 The large fire truck with the white ladder was only assembled briefly.  It was far too large for our classic road plates and the city that built up off them.  The parts have been moved around many times but we've never actually converted them into another fire vehicle. 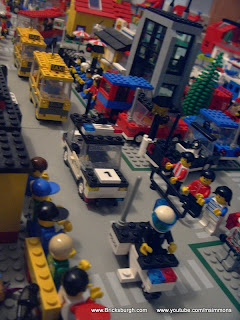 Most of these cars are still in town-- more or less.  The black one isn't a convertible anymore and the red one now has grey wheels and trim... and the "van"-like red and blue one has been completely rebuilt. 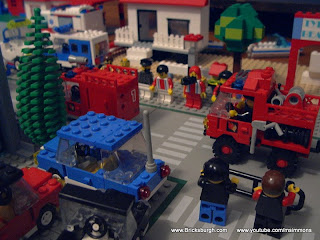 The fire truck on the right has since been modified into a compact "heavy rescue" type first response vehicle for car accidents.  Here you can see we'd started the transformation with the winch on the back. 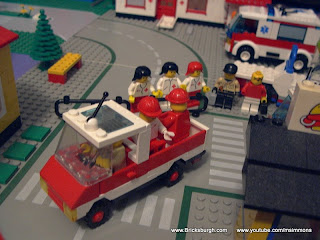 Among the rescuers sent were some of the town's construction workers.  We figured that they would have the specialized skills to work heavy cranes and bulldozers as well as searching damaged buildings.  The ambulance in the background was later converted into one that would better fit on our narrow streets. 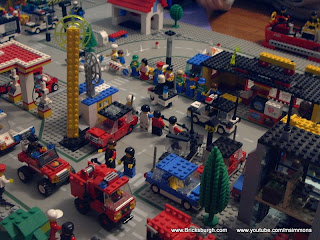 In those days, you could have a big downtown building by just throwing a second story on!  Nowadays the downtown district starts at 3 stories tall!  In the background is a rare glimpse into the church-- which even now we haven't fully furnished.  Oops. 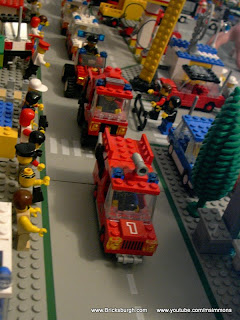 Assuming you could find a two-story building... this was the view from the window. 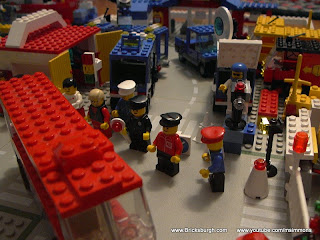 These pictures were taken YEARS before our current buses (fan favorites in their yellow color with the red/blue stripes and tinted windows).  Back then there was one bus that was red and blue and quite crude-- you can see it going around the turn here. 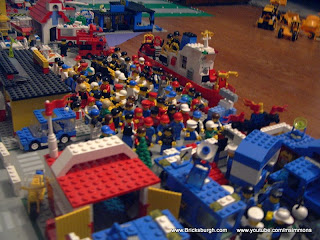 At the end of the parade, all the rescuers gathered on the closed waterfront street (years before the boardwalk was created) and were joined by the rest of the town's people.  Various people gave speeches-- like the mayor, obviously-- from a stage that was built at one end of the street.  The highway department was in charge of portable power back then and you can see their white and blue trucks and generator trailer parked behind the stage. 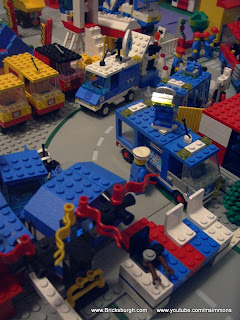 Mixed in with the portable power is the truck on the right.  We still have this truck but it has seen massive improvements (like matching doors!).  It isn't a TV truck (you can see the local news on the far end of the street) but it does have a satellite dish on it and controls on the outside.  The controls are for the public address system and the truck can also provide feeds back to the town hall and police station (for security purposes and for the town's public access TV station).

Thanks for visiting us here at www.bricksburgh.com and check out the videos on our YouTube channel at www.YouTube.com/MSIMMONS.
at 11:05 PM