The police station set # 588 was the very first Lego set I ever had.  It was Christmas of 1982 (I think) and I was both thrilled to get it and also mystified by what I remember thinking was a weird puzzle of some kind.  Lego weren't something I had see before!  The set is superb, even by modern standards, with lots of details and selection of vehicles to mess with.  As time went on the motorcycle was replaced by the more modern types (and dismantled) and the patrol car itself was vastly upgraded.... but the helicopter still... well...  stunk.  And then we upgraded it to THIS: 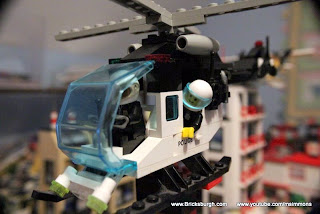 Very little of the original helicopter survived this VERY thorough rebuilding of the helicopter.   Like many of our projects, this one was started by a single piece that needed-- NEEDED-- to be used in or on something.   We'd made a major score of Lego at a nearby garage sale and the front canopy/windshield piece was in the bag with the skid piece and the tail rotor (which is MUCH cooler looking than the original skinny 2-blade version). 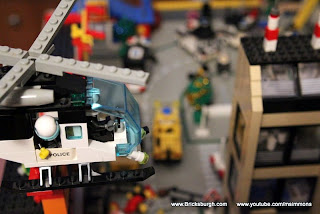 The other helicopters in town all looked pretty good so our option was to build a new one around those pieces or to rebuild the police helicopter.  Since the original helicopter was looking really plain I took it as a personal project to have an "awesome" replacement ready to show Tyler the next morning.  Parts bins out it was my quest for that night to make the best chopper I could. 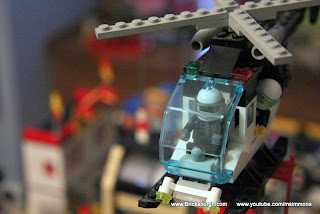 Most of the pieces you see were from that night's building session.  The police doors were from the old helicopter and I think the only pieces I had to order (later) were the "glass" pieces for the side windows (we only had the frames-- and they were also extras from something). 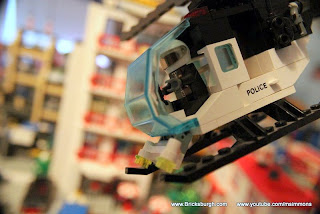 Aside from the parts on hand the only other limitation was that it still had to fit on the police station helicopter pad-- after all, of what use would a police helicopter be if it were all the way at the airport?   Luckily, the new skid piece fit on the helipad... BARELY. 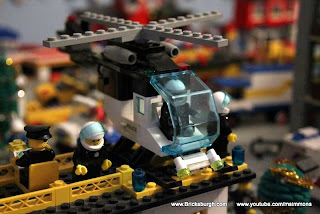 I used a fire helicopter set as inspiration (because it used the same canopy piece) and stretched the chassis to gain a backseat since I had "police" doors to use too!  The rear storage compartment (which is nice and roomy) was actually an accident-- I intended to use a door on each side so I could "pinch" the tail but could only find ONE of the black doors (!!) so I closed the other side and put utility brackets on that side. 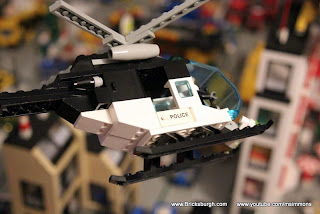 The brackets have been used for all sorts of things but Tyler has taken to "arming" the helicopter by putting a  revolver back there.   That doesn't seem REAL safe to me... but his police department is pretty lax about gun safety (the motorcycle cops have their guns in brackets behind their seats too). 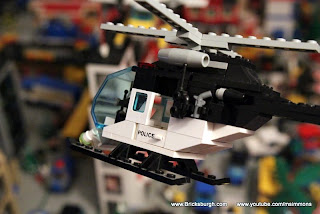 The backseat has worked out really well too.  It's roomy enough for a minifig-- easily-- and since the floor area is 2x3 studs, there's room for a suitcase or other utensils.  Everyone from the mayor to handcuffed criminals have ridden back there. 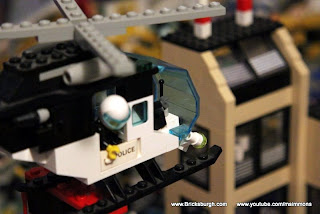 The backseat also lends itself to moving police quickly when there is a manhunt underway (we have a lot of escaped prisoners in town).   After all, it may be easy to outrun a police car but not a police helicopter! 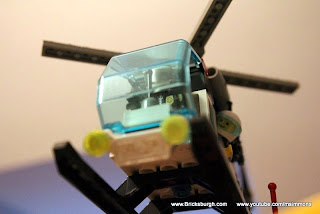 The engine pieces, btw, were scavenged from a very old Lego Space set.   I received it very early in my Lego collecting (1983 maybe?) but since I was always into the Town sets I ended up parting it out over the years.
To see more of this helicopter, check out our video tour:
Want to know what all those police officers were looking for at the end of the video?  That's our next blog post.... coming SOON!